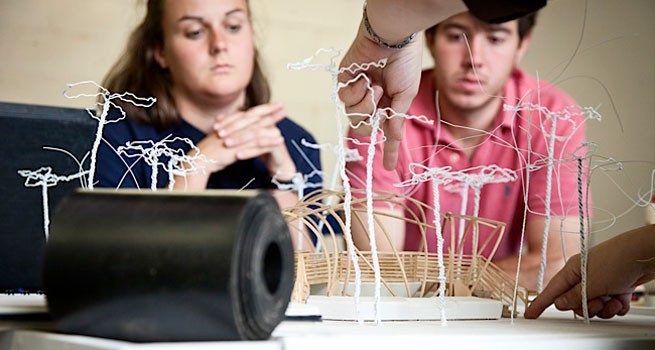 Not to editorialize, but the Pulse Dome Project: Art and Design by Don ZanFagna exhibit at the Halsey Institute of Contemporary Art is exceptional. If you haven’t seen it yet, do so before it closes on Dec. 8.

However, despite the gallery’s vivid collages of the artist’s dream of self-sustaining houses, we were most excited about a different aspect of the exhibition: the Clemson Architecture Center in Charleston’s real-life pulse dome, which they were hoping to construct in Marion Square before the Thanksgiving break. As the City Paper detailed in its October cover story on ZanFagna, the Clemson students — led by professor and architect David Pastre — were hoping to build a bamboo dome and usable bridge over the park’s fountain. Unfortunately, things didn’t work out as planned.

Finding a new ‘Pulse’: Halsey show a reimagining of how we live 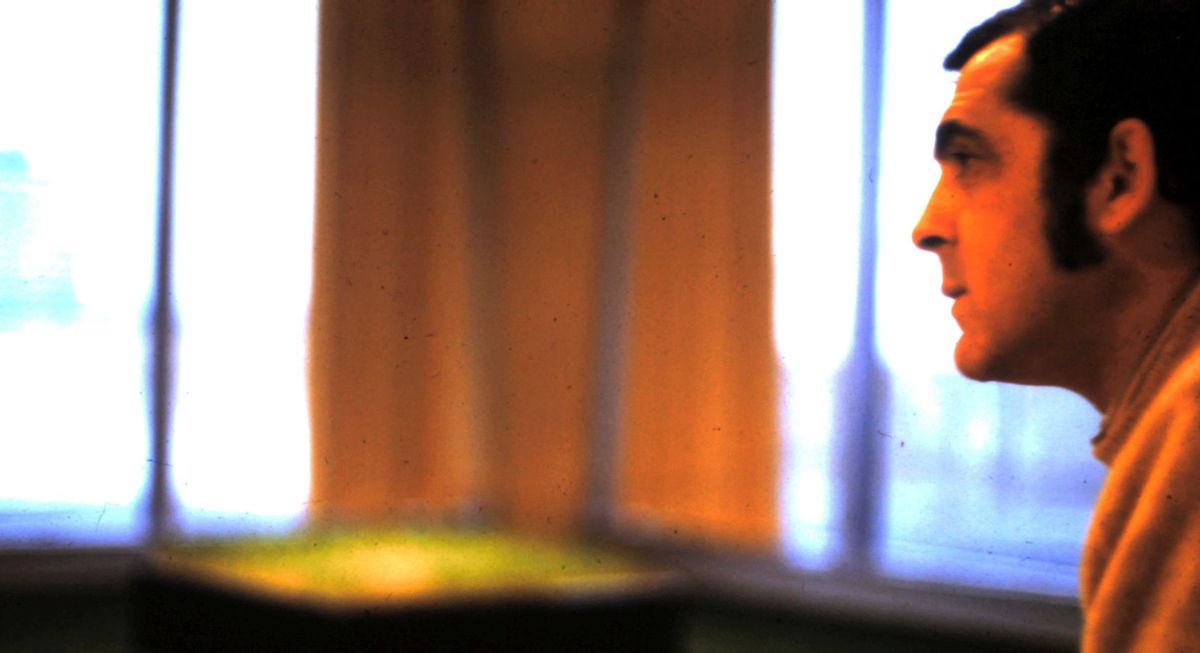 Don ZanFagna is an adventurer, a climber of the mind’s mountain peaks, a man who skydives through the imagination.

He is the inventor of the “Dome of Ultimate Possibilities,” the “Echo-Locator of Splendor,” the “Pillar of Life Retro-Erecto.”

He is more than an artist, said Mark Sloan, director of the Halsey Institute of Contemporary Art. He’s a visionary whose work pushes boundaries and probes big questions. It’s not meant to serve as an explicit blueprint for a sane new world, Sloan said. It is ZanFagna’s way of channeling profound concerns.

What if you could grow your own house? That mind-boggling idea was first explored by artist and architect Dan ZanFagna decades ago. Mark Sloan, executive director at the Halsey Institute of Contemporary Art, says a persistent concern and idea of ZanFagna’s over the course of his long and very interesting career was that humankind is living in disharmony with the environment. “He wanted to create something that would allow us to sustain ourselves,” Sloan says. By studying patterns that develop in nature, ancient civilizations like the Mayans and the Egyptians, and even insects like bees, he came to develop the idea of a “pulse dome,” or a structure that was not just a shelter but a source of energy for the people living inside of it.

Don ZanFagna wanted to grow houses: The Halsey and CAC are trying to make that happen

It’s late September in one of the white classrooms at the Clemson Architecture Center in Charleston’s Franklin Street building, and 10 students are trying to grow a house.

As part of professor and architect David Pastre’s design-build studio class, the pupils have been split into three groups. Each has been tasked with creating a Pulse Dome, a self-sustaining structure originally devised in the 1960s and ’70s by current Mt. Pleasant resident Don ZanFagna. The construction is intended to be assembled in Marion Square, the city’s most public venue.

Htein Lin shares stories of activism and art at the Halsey 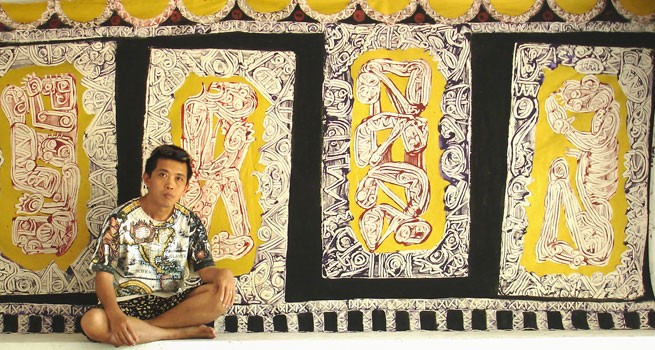 Htein Lin has six and a half years’ worth of art painted on white cotton prison uniforms. The paintings? His own. The uniforms? Also his own.

Lin is a Burmese painter and performance artist who spent more than seven years as a political prisoner — seven months of that time on death row. And during all that time, he has never stopped creating art. 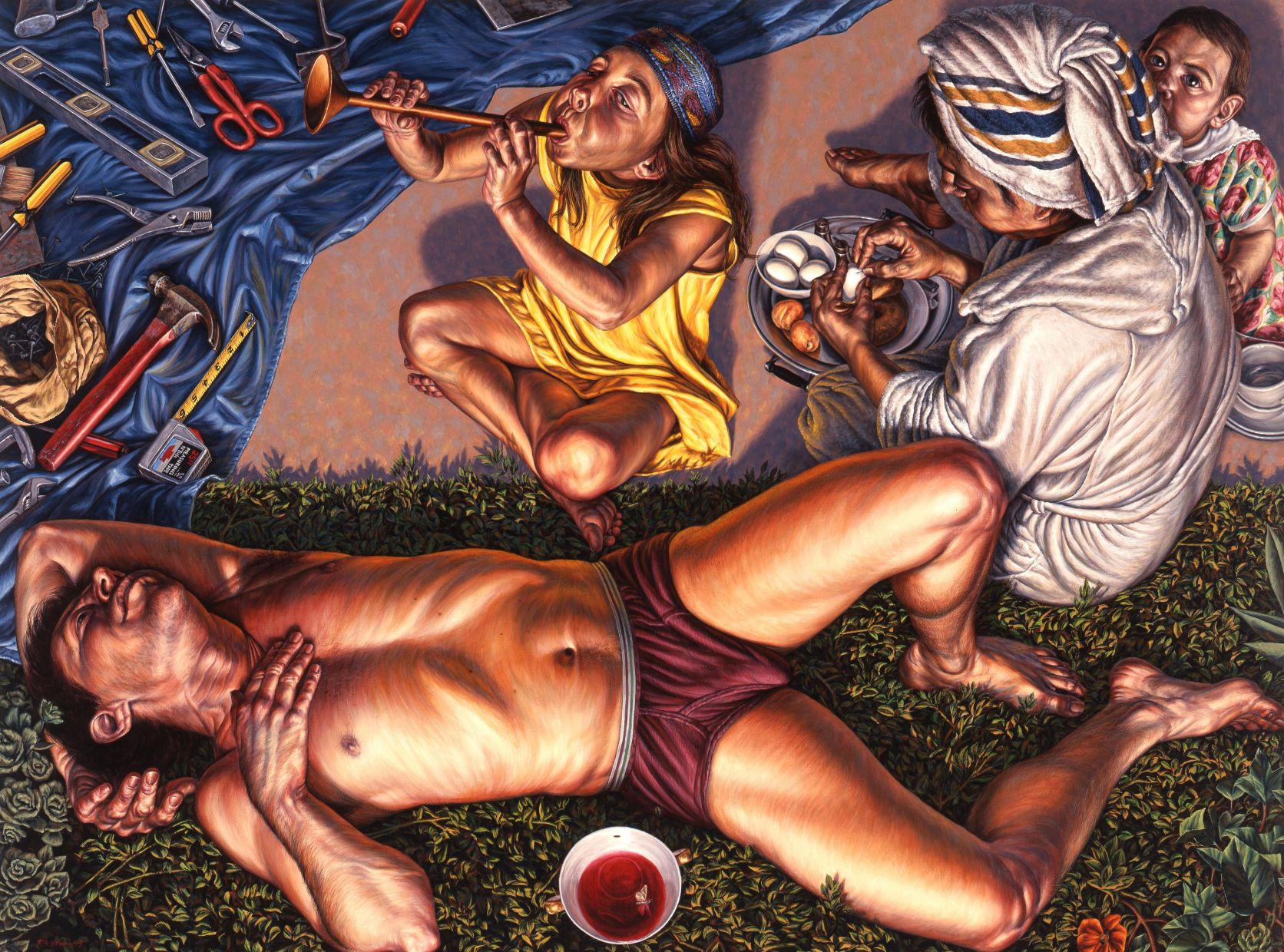 Possibly it was his father, Eugene Nolan Jr., who punched the hole that artist F. Scott Hess would struggle to fill in myriad ways over time.

Nolan disappeared from his son’s life, then was found decades later with an inadequate ancestral memory. Hess, obsessed with genealogy and history, was left unsatisfied. But a solution soon presented itself.

He’s always been a storyteller of sorts, he said. Known primarily as a realist painter, his pictures include built-in narratives. He’s tried his hand at fiction writing, too. But Hess found his voice in 2005 when he established the F. Scott Hess Family Foundation and initiated his hunt for family artifacts in earnest.

With a family tree that extends far back to the 1634 settlement of Dorchester Bay in what would become Massachusetts, Hess has spent the past seven years finding and collecting objects, documents, photographs and stories in a tenacious effort to construct a historical narrative that may or may not be accurate.

But this is art, and accuracy isn’t the point.

“The Paternal Suit: Heirlooms From the F. Scott Hess Family Foundation” is a sweeping and mesmerizing exhibit at the Halsey Institute for Contemporary Art that runs through Oct. 6. Entering the galleries of the Halsey is akin to stepping into a weird time machine that propels you into the 17th century, then pulls you along a topsy-turvy incline to the present: from Puritan settlers to Iranian royalty, from witch trials to a portrait of the artist as a young man. 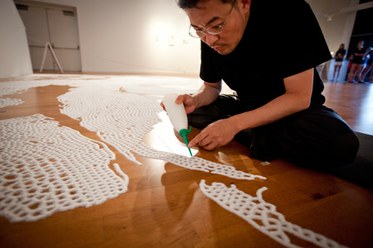 Japanese artist Motoi Yamamoto has created elaborate installations emulating ruins, corridors and labyrinths, all made entirely of white salt, in museums and galleries around the world but his first show in Los Angeles is now at the Laband Art Gallery at Loyola Marymount University.

The artist, born in Hiroshima, graduated with a B.A. from Kanazawa College of Art in 1995. The following year, his 24-year-old sister died of brain cancer. This trauma led the artist to meditate on the transience of life and to begin working with a new medium: salt.

In Japan, salt is used for ritual purification at funerals but also before sumo wrestling matches, even in restaurants and bars, where it is used to ward off evil spirits.

The Halsey is now offering free smartphone-powered audio tours of their exhibitions. The gallery premiered the feature at this summer’s Return to the Sea exhibition, and it’s all set up for F. Scott Hess’ Paternal Suit exhibit, which opens Fri. Aug. 24. QR codes will be placed throughout the exhibition, offering more in-depth stories and anecdotes about various pieces.

F. Scott Hess pranks the past with ‘The Paternal Suit’ 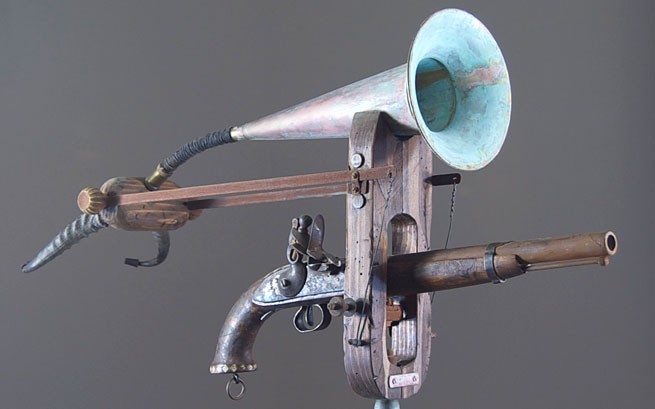 As author Stephanie Yuhl observed in her book A Golden Haze of Memory: The Making of Historic Charleston, the foundation of Charleston’s modern tourism economy rests on residents’ fantasies of an idyllic antebellum past. It’s an interesting topic, but it doesn’t make Charleston, or the universal human impulse to “improve” one’s ancestors, unique.

It does, however, frame the premier of F. Scott Hess’ exhibit The Paternal Suit: Heirlooms From the F. Scott Hess Family Foundation as one of the most provocative events to hit the city this century. The exhibit opens at the Halsey Institute on Aug. 24, and what happens after that is anyone’s guess.

Guests crowded into the Halsey lobby Saturday afternoon to take part in the closing celebration of Motoi Yamamoto’s Saltworks exhibition. The Halsey attracted a record 8,000 visitors over six weeks who came to see the site-specific installation made entirely of salt. According to curator Mark Sloan, the salt was only disturbed twice — by a fallen pair of sunglasses and an iPhone. Both were retrieved with a wooden stick with double-sided tape on the end.

After Sloan gave a welcoming speech highlighting the importance and power of salt in our lives — it’s necessary to our survival but too much or too little could be the end of us — the crowd prepared to sweep up the salt. Our eyes slowly wandered into the exhibit, waiting for the fun to start. Several children crept right up the ribbon, waiting for it to be cut to release them into the salty sand box.

Visitors were invited to collect the salt using the original 194 cans of Morton Salt that Yamamoto had used for the exhibit, and others brought their own bags, tea tins, and buckets. The Halsey also provided pieces of Plexiglas to scrape up the humidity-hardened grains, but people some just used their hands or credit cards — we even saw someone risking their iPhone to get the floor clean.