An entirely virtual exhibition, 10/10: Reflections on a Decade of Exhibitions celebrates ten years of exhibitions, partnerships, and programs produced in the Halsey Institute of Contemporary Art’s current gallery space inside the Marion and Wayland H. Cato Jr. Center for the Arts at the College of Charleston. We are spending summer 2020 taking a look back on the adventurous artists we’ve hosted and projects we’ve produced in that time. Over ten weeks, we will be taking a deep dive into each year, featuring blog posts on exhibitions, interviews with artists, and other explorations into the Halsey Institute’s past. This week we are profiling our exhibitions from the year 2012.

First, we presented the exhibition Aggie Zed: Keeper’s Keep. Through sculpture, drawing, and painting, Aggie Zed’s imaginative works examine humans’ relationship with the animal kingdom. Many of her works feature fusions of animal and machine, evoking dreamlike figures as she transports viewers to a world of absurdity, ambiguity, and imagination. 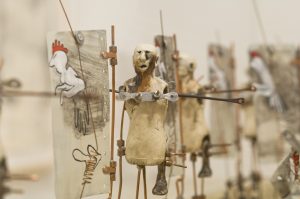 In May of that year, we featured Return to the Sea: Saltworks by Motoi Yamamoto. In this exhibition, Yamamoto created an elaborate installation using only salt. Spread out on the entire gallery floor, the installation took several days for the artist to complete alone. After the show closed, the public was invited to take the salt and pour it into the Charleston harbor. 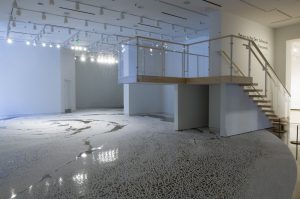 In the fall, the Halsey presented The Paternal Suit: Heirlooms from the F. Scott Hess Family Foundation by artist F. Scott Hess. This show consisted of over 100 paintings, prints, and objects created by Hess, but presented as historical artifacts. This body of work examines the impact of false history and deception within generations, questioning the authority of perceived truths. 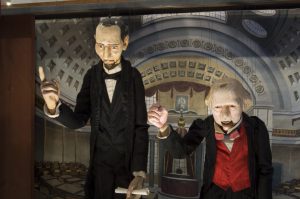 Finally, in October of that year, the Halsey opened the Pulse Dome Project: Art and Design by Don ZanFagna. Starting in the 1970s, ZanFagna conceived a home built with and maintained by all organic processes, existing in pure harmony with nature. This exhibition explored that concept, featuring many drawings from his sketchbooks along with paintings, books, and other objects. 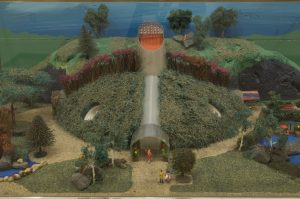