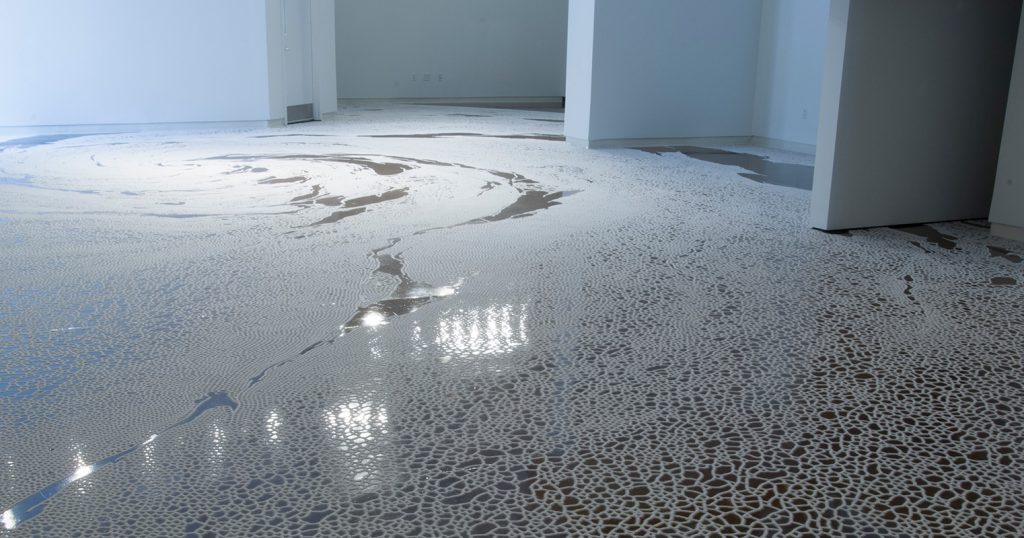 The Halsey Institute of Contemporary Art has organized a major traveling exhibition of new work by contemporary Japanese artist Motoi Yamamoto. The exhibition will premiere in Charleston May 24-July 7, 2012, as a featured presentation of the Spoleto Festival USA. Return to the Sea: Saltworks by Motoi Yamamoto will travel nationally after its inaugural presentation, including stops in Los Angeles, CA, Charlotte, NC, and Monterey, CA. The centerpiece of the exhibition will be a site-specific installation created entirely out of salt by the artist during his two-week residency at the Halsey Institute.

Curated by Mark Sloan, director and senior curator of the Halsey Institute, the exhibition will also feature a series of recent drawings, photography, sketchbooks, a video about the artist, and a 170-page color catalogue documenting fourteen years of the artist’s saltworks around the world. The catalogue includes essays by Sloan and Mark Kurlansky, author of the New York Times best seller, Salt: A World History. This video includes interviews with Japanese art curators contextualizing Yamamoto’s work, and features Yamamoto at his studio in Kanazawa, Japan providing insight into his creative process. Also in the video are still images and time-lapse videos of many of the artist’s previous installations all over the globe and an overview of the fascinating history of salt in Japanese culture.

Yamamoto and the Halsey Institute are collaborating with the Clemson Architecture Center in Charleston’s (CAC.C) Studio V Design and Build class to create two viewing platforms for the installation. This will be the fifth collaboration between the Halsey Institute and CAC.C’s Studio V class. The students, led by Ray Huff and David Pastre, will design and build a large platform in the Halsey’s main gallery to provide visitors with multiple vantage points of the large saltwork. The students will also build an outdoor viewing platform for the gallery window fronting Calhoun Street, providing curious passers-by with a glimpse of the installation 24 hours per day.  These platforms will be in use during the run of the exhibition and also for Yamamoto’s residency, May 17- 24. Studio V will be keeping a blog of their process and the public can follow their progress by clicking here.

A STORY IN SALT

Japanese artist Motoi Yamamoto is something of a magician. Although he does not utilize sleight of hand, he creates installations that encourage the mind to travel between astonishment and wonder. His medium is salt, yet the effect of his labors is transcendence. Not an easy feat.

The field of modern and contemporary art is crowded with artists who have worked with unconventional materials. From Meret Oppenheim’s mink-lined teacup to Joseph Beuys’s felt and suet, to Wolfgang Laib’s use of bee pollen, the list is endless. Enter Motoi Yamamoto. He uses salt to create mental maps, miniatures of the mind. Yet, in his case, he doesn’t seem to choose materials merely for the sake of novelty or originality.

Motoi Yamamoto is known for working with salt, often in the form of temporary, intricate, large-scale installations. He has created projects throughout the world—Jerusalem, New York, Tokyo, Mexico City, Athens, Seoul, Toulouse, Hamburg, and Charleston, to name but a few places. Salt, a traditional symbol for purification and mourning in Japanese culture, is employed in funeral rituals as well as by sumo wrestlers before matches. It is frequently placed in small piles at the entrance to restaurants and other businesses to ward off evil spirits and to attract benevolent ones. Motoi forged a connection to the element while mourning the death of his sister, at twenty-four, from brain cancer, and began to create art out of salt in an effort to preserve his memories. His art radiates an intense beauty and tranquility, but also conveys something ineffable, yet endless.

Motoi views his installations as exercises that are at once futile yet necessary to his healing. An important aspect of the installation is the dismantling of his work at the end of each show and delivering the salt back to water, usually in collaboration with the public; hence, the title Return to the Sea.

He recognizes that salt is a vital part of many living things, and that this mineral could conceivably enter and leave multiple organisms throughout the planet over the span of time. Each grain of salt contains its own history and trajectory. Something so seemingly common becomes a metaphor for the evanescence and transience of human life.

Yamamoto’s art might most productively be compared to the intricate sand mandalas created by Tibetan Buddhist monks. In both cases, the work is destroyed at the end of a predetermined interval and returned to a body of water thus enacting the circularity and ephemerality of life. Both are used to induce meditation and to access the deeper reaches of human consciousness. One important difference is that Yamamoto’s work emanates from a powerful personal experience rather than a shared spiritual tradition.

The book and video that accompany this exhibition take measure of Motoi Yamamoto’s engagement with salt installations since he began making them in 2000. By showing the range of works he has produced, we seek to chart the artist’s journey of healing as he explores these different forms of expression. As Mark Kurlansky states in his essay, salt has a very rich and noble history entwined with Japan’s development as a world power. Knowing its myriad uses in Japanese culture makes it less of a common, everyday substance and more of a mercurial one. Its snow-white purity, combined with the uniformity of the grains, provides Yamamoto with a material at once literal and poetic— loaded with associational possibilities.

Yamamoto’s artistic trajectory is full of innovations and surprises. His ability to adapt his concepts to the various configurations and idiosyncrasies of the galleries and exhibition spaces that have displayed his work itself serves as a source of inspiration. His subtle use of gradation and perspective may cloud the mind into thinking this could be a mountain range as seen from the air, or a typhoon out in the open ocean. The real power and magic of Yamamoto’s work resides in the indeterminate space between what is and what might be.

Motoi Yamamoto is an internationally renowned artist who calls his native Japan home. He was born in Onomichi, Hiroshima in 1966 and received his BA from Kanazawa College of Art in 1995. He has exhibited his award-winning creations around the globe in such cities as Athens, Cologne, Jerusalem, Mexico City, Seoul, Tokyo, and Toulouse. He was awarded the Philip Morris Art Award in 2002 as well as the Pollock-Krasner Foundation Grant in 2003. Although he participated in a group exhibition that same year at New York’s P.S. 1, his work has yet to be widely seen in the United States.

Yamamoto says, “Drawing a labyrinth with salt is like following a trace of my memory. Memories seem to change and vanish as time goes by; however, what I seek is to capture a frozen moment that cannot be attained through pictures or writings. What I look for at the end of the act of drawing could be a feeling of touching a precious memory.”

The Dismantling of Motoi Yamamoto's "Return to the Sea: Saltworks"

Motoi Yamamoto's "Return to the Sea: Saltworks" - Spoleto Festival USA at the College of Charleston