An entirely virtual exhibition, 10/10–Reflections on a Decade of Exhibitions celebrates ten years of exhibitions, partnerships, and programs produced in the Halsey Institute of Contemporary Art’s current gallery space inside the Marion and Wayland H. Cato Jr. Center for the Arts at the College of Charleston. We are spending summer 2020 taking a look back on the adventurous artists we’ve hosted and projects we’ve produced in that time. Over ten weeks, we will be taking a deep dive into each year, featuring blog posts on exhibitions, interviews with artists, and other explorations into the Halsey Institute’s past. This week we are profiling our exhibitions from the year 2018. 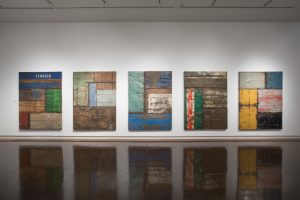 In January, we opened Robert Diago: La Historia Recordada. In this show, the Cuban artist presented a wide range of abstract painting and sculpture, examining the role of slavery in Cuba, and how it still permeates the island nation’s culture. His works often feature found materials and use the language of modernist abstraction to illuminate the invisible strands of racial oppression in Cuba. 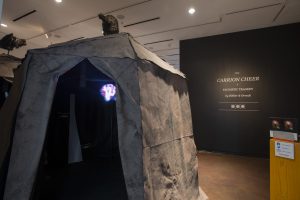 In May, we commissioned a project called The Carrion Cheer, A Faunistic Tragedy by the German artist duo Boehler & Orendt. The installation consisted of nine tents—in each, a representation of an extinct animal would appear, all joining together in a chorus to forgive humans for causing their collective extinction. While whimsical in nature, the installation addressed humans’ role in the destruction of the natural world around us. 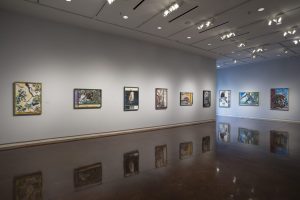 That August, we featured the Italian artist Hitnes and his vast project The Image Hunter: On the Trail of John James Audubon. For this project, the artist traveled around the eastern united states, visiting sites in which Audubon was known to have found and drawn birds. In many of these places, Hitnes created a public mural depicting one of the birds drawn by Audubon in his opus The Birds of America. The exhibition at the Halsey Institute featured drawings, etchings, and a book Hitnes created in response to his journey. 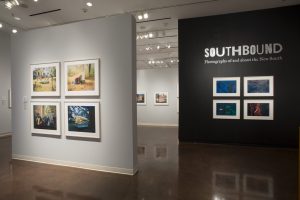 Southbound: Photographs of and about the New South, installation view, 2018. Photo: Rick Rhodes.

Finally, in the fall of 2018, the Halsey Institute presented Southbound: Photographs of and about the New South. Curated by Mark Sloan and Mark Long, this project examines the American South—a region of constant flux and divergent paradoxes—through the eyes of 56 photographers. The exhibition looked at many aspects of the region, including new urbanisms and demographic shifts, fraught race relations and unceasing vestiges of slavery, intentional communities, and environmental disaster. For the exhibition, which was on view at both the Halsey Institute and Charleston’s City Gallery at Waterfront Park, the Halsey produced an authoritative catalogue, a short documentary by John David Reynolds, an interactive map exploring key markers of the South, and a national tour.