An entirely virtual exhibition, 10/10–Reflections on a Decade of Exhibitions celebrates ten years of exhibitions, partnerships, and programs produced in the Halsey Institute of Contemporary Art’s current gallery space inside the Marion and Wayland H. Cato Jr. Center for the Arts at the College of Charleston. We are spending summer 2020 taking a look back on the adventurous artists we’ve hosted and projects we’ve produced in that time. Over ten weeks, we will be taking a deep dive into each year, featuring blog posts on exhibitions, interviews with artists, and other explorations into the Halsey Institute’s past. This week we are profiling our exhibitions from the year 2015. 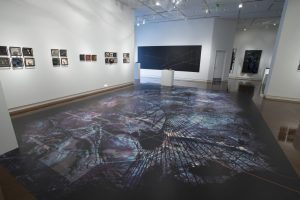 First up that year was Patricia Boinest Potter’s Patterns of Place. Potter’s work consists of three-dimensional maps that represent a one-hundred-mile stretch of northern Alabama, encompassing both the vast cosmos and the tiniest of particles. The artist, who was born in Charleston, was inspired by the pattern movements of starlings, known as murmuration. 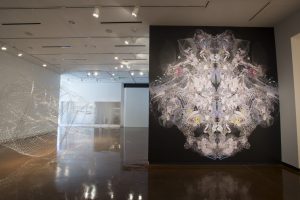 In May of 2015, the Halsey presented Alyson Shotz’s Force of Nature, a series of more than 50 works in various media that explore natural phenomena. These works included a monumental sculptural installation; a site-specific, volumetric wall drawing; and a collaborative animation, as well as digital and traditional prints, photographs, and ceramics. 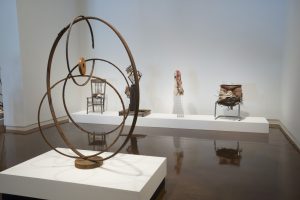 Lonnie Holley’s show, Something to Take My Place, which opened at the Halsey in August, was a multi-faceted showcase of work by the artist and musician, featuring a residency, exhibition, video, concert, and monographic catalogue. This was the artists first solo museum exhibition since 1994 and featured his work from the early 1990s as well as more recent work—all of which consist of found objects. 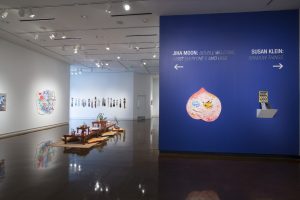 The following exhibition opened in October and featured artist Jiha Moon. Double Welcome, Most Everyone’s Mad Here showcased Moon’s interest in using cultural elements native to Korea, Japan, and China alongside Western icons to examine the exchanges and tensions and between these cultures. 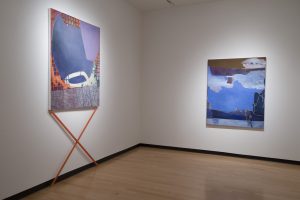 On view at the same time as Jiha Moon’s show was Susan Klein’s Shadow Things. Klein’s paintings combine imagery from separate places and times into one image in order to explore questions of time, accumulation, loss, and history. Her resulting paintings read as something that is observational, somehow recognizable yet ambiguous.