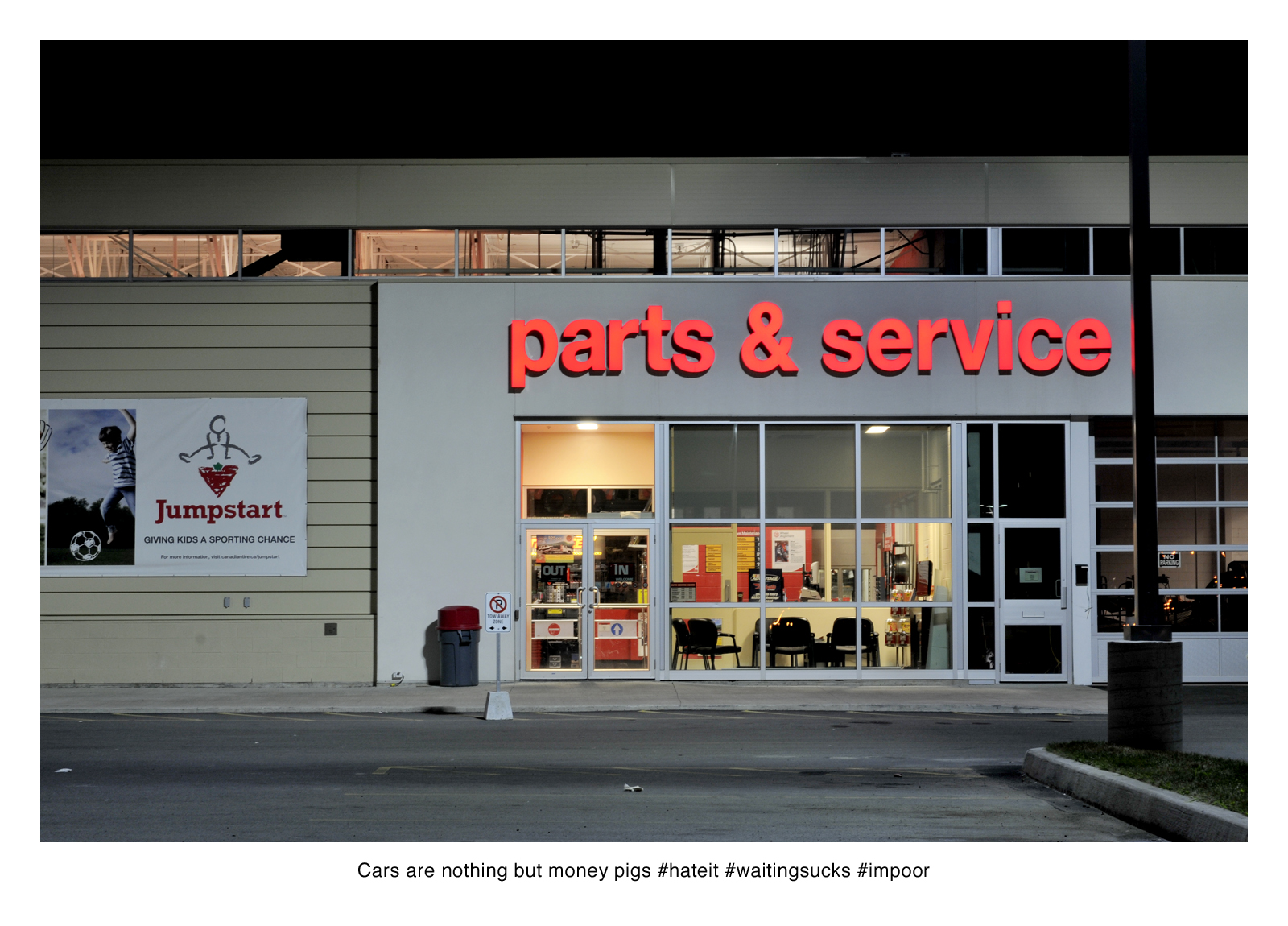 The Halsey Institute presents Geolocation by the artist duo of Nate Larson and Marni Shindelman. Using publicly-accessible geographic data from tweets, Larson Shindelman track down specific locations where Twitter users were when they posted on social media. Once there, the artists make a photograph from the location, connecting the tweet—stored on a remote server and readable around the globe—and the physical world. This body of work explores the connection between text and images, digital and analog, and private versus public.

“We use publicly available embedded GPS information in Twitter updates to track the locations of user posts and make photographs to mark the location in the real world. Each of these photographs is taken on the site of the update and paired with the originating text. Our act of making a photograph anchors and memorializes the ephemeral online data in the real world and also probes the expectations of privacy surrounding social networks.

Twitter estimates there are over 550 million tweets daily, creating a new level of digital noise. Clive Thompson uses the term ambient awareness to describe this incessant online contact in the New York Times Magazine article, “Brave New World of Digital Intimacy.” According to Thompson, “It is. . . very much like being physically near someone and picking up on his mood through the little things he does—body language, sighs, stray comments—out of the corner of your eye.” Our collaborative work is a means for situating this virtual communication in the physical realm. We imagine ourselves as virtual flâneurs, ethnographers of the Internet, exploring cities 140 characters at a time through the lives of others.”

Open to all levels. Email halseyRSVP@cofc.edu to reserve your space

Maps, Politics, and Graphic Design | A lecture by Scott Reinhard

This event is co-sponsored by the Geography Program at CofC. Watch a recording of this event on the WATCH page.

Open to all levels. RSVP to halseyRSVP@cofc.edu

Nate Larson and Marni Shindelman’s collaborative practice investigates the data tracks we amass through networked communication. Their work ties the invisible to actual sites, anchoring the ephemeral in photographs and immersive video installations.

As Larson Shindelman, they have collaborated for the last ten years, working over distance and through site-specific projects.
Solo exhibitions include Pictura Gallery in Indiana, the Orlando Museum of Art in Florida, Light House in Wolverhampton, Blue Sky in Portland, United Photo Industries in Brooklyn, and the Contemporary Arts Center Las Vegas.

Selections from their projects have been shown at the Crystal Bridges Museum of American Art in Arkansas, FotoFest in Houston, the Southeast Museum of Photography in Florida, Newspace Center for Photography in Portland, Masur Museum of Art in Louisiana, the Light Factory in Charlotte, the FotoFestiwal in Poland, the Athens Photo Festival in Greece, the Houston Center for Photography, Baltimore Museum of Art, the Moscow International Biennale in Russia, RAIQ in Montréal, Peloton in Australia, and Conflux Festival in NYC.

Larson Shindelman recently completed site-specific projects for the Dumbo Business Improvement District in New York City, the Indianapolis International Airport in Indiana, Atlanta Celebrates Photography in Georgia, the Digital Arts and Entertainment Laboratory (DAEL) in Georgia, the Format International Photography Festival in the UK, the Walter N. Marks Center for the Arts in California, and Third Space Gallery in New Brunswick. They were recently artists-in-residence at CEC Artslink in Russia, Light Work in Syracuse, and the Robert Rauschenberg Foundation in Florida.

View a virtual version of Larson Shindelman: Geolocation below.

The almost ubiquitous internet acronym IRL, which stands for “in real life,” suggests a bifurcation of lived experience. Denoting a fracturing of reality, it breaks life into two domains: one existing in the connections between servers on the internet, and the other in the realm of lived experience. While this fragmented reality was more conceivable in the internet’s early existence, younger generations are growing up in a world where one’s IRL and online selves are often indistinguishable. As Orit Gat wrote in 2018, “a word to differentiate between time spent online and offline isn’t very handy after smartphones, which all but ensure we’re never actually offline.” [1]

Today’s largest social media platforms effectively obfuscate the boundary between online and offline worlds. On a high-volume service like Twitter, which boasts over 180 million average monthly users and hundreds of millions of tweets sent each day, it is particularly easy to enmesh aspects of one’s online and offline selves.[2] As a microblogging service with posts limited to 280 characters, the service encourages users to post even the most banal moments of their daily existence. In general, this has helped Twitter become a platform of the mundane, less glitzy than the filtered images on Instagram and less significant than the birth announcements on Facebook.

Aware or not, each Twitter user participates in a commercial architecture built by a multibillion-dollar corporation. Mining this large volume of tweets provides tragets for advertisers; thus Twitter is keen to collect as much data from its users as they allow. One bit of data, which users must opt-in to provide, is location. For users that allow it, each tweet has an embedded pair of latitude and longitude coordinates, revealing the exact location from which each respective tweet emanated. This geographic data is not easily accessible through Twitter’s user interface itself; rather it is freely available via an API—or application programming interface—to developers, websites, and apps. [3]

It is with this geographic data that artistic duo Larson Shindelman create work from their series Geolocation and #Mobilize. Collaborators Nate Larson and Marni Shindelman search for tweets from a given area and collect location data. After scouting these locations and considering the text of the respective tweet, they create photographs of the scenes that they see—giving us presumably firsthand visual perspectives of each tweet’s author, imbuing each tweet with a hypothetical visual narrative. The artists then print each photograph along with its tweet, including any hashtags but leaving out identifying information.

In this sense, the images created by Larson Shindelman add a new set of complex layers on top of a necessarily brief caption. In many cases, the images provide a recognizable context for viewers. In Geolocation: Money Pigs, 2011, the tweet reads: “Cars are nothing but money pigs #ihateit #waitingsucks #impoor.” Perhaps unsurprisingly, the photograph portrays the waiting room of an auto maintenance shop. The signage reading “parts & service” faces the harsh glow of a fluorescent parking lot lamp, while an empty lobby awaits a new day of customers, idly marking time—and dollars—as their vehicles receive their regular upkeep.

Such pairings can also have profound effects on each element of the work. Geolocation: Lost My Dad, 2011 paints a vivid picture in connection to its tweet, which states: “Two years ago today I lost my Dad…time sure flies! I miss you Dad. #RIP.”  With a tweet that illustrates Twitter’s maximum capacity for the elegiac, the photographers have presented a poignant image of the front door of a slightly rundown residence. From one of the two doors in the frame, a dog peers out into the distance, almost as if it’s waiting for the “Dad” who will never return. The tweet marks a period of two years since the death of the father, a passing of time suggested in the photograph by the wearing away of paint on the exterior siding and weeds sprouting out of the concrete steps. As a result of this photograph-tweet pairing, each element gains significance—the image gains a narrative, lending it new layers of readability, while the tweet attains even greater depth with its connection to the visual element of the photograph.

In other images, the photographers complicate readings of both tweet and image with their pairings. With Geolocation: Gun Shot, 2011, Larson Shindelman’s image of a foggy scene of maritime structures in a body of water of unknown size provides an unlikely locale for a tweet that reads: “Pretty sure I just heard a gun shot lol.” With the careful framing of the photograph, it appears as though it could be taken in the middle of the ocean or just offshore, not exactly characteristic locations for gun shots or tweeting. The author’s ‘lol’ adds further disconnect, inserting an indication of levity into a tweet—and image—at what purports to be an odd time.

Recently, Larson Shindelman have continued their Geolocation methods while using tweets that contain specific hashtags that reference ongoing struggles around social and racial justice. In a series called #Mobilize, the photographers seek out tweets with hashtags such as #blacklivesmatter, #sayhername, #takeaknee, and #metoo. Such hashtags have defined spaces within Twitter where activists can make their voices heard. At times, hashtags have played a key role in social media, and they’ve arguably had a mobilizing effect, in turn possibly accelerating societal change, as seen in the Arab Spring of the early 2010s and the aftermath of the murder of George Floyd by Minneapolis police officers in 2020.

Larson Shindelman’s #Mobilize series helps to conflate ideas of online versus offline activism. In many of the images presented in #Mobilize, the locations are often quiet neighborhood streets and rural grassy fields—in contrast to scenes of protests on city streets commonly shared by the media. #Mobilize (Silence from the NRA), 2018, and #Mobilize (Haunting Shadow), 2018, feature photographs of quiet, verdant locales. Commercial districts appear in others, like #Mobilize (Protesting My Heart Out), 2018, and #Mobilize (Opiate), 2018; but, again, they are portrayed away from the densely populated city streets that are the stereotypical sites for protests.

The resulting effect shows the breadth of activism occurring outside the protests that gain notoriety in the news media. Using specific hashtags, users can connect themselves to various protest movements no matter where they are. People browsing these hashtags can access streams of tweets connected to given issues—tweets from people located all around the world, all collected in one place. Such is one of the utopian promises of the internet—the idea of a highly connected society where all are equal. The works in the #Mobilize series reinforce this idea, showing that people from all over can join in with specific protests. They, along with the Geolocation series, show that our online lives may not be so distinct from our offline lives after all.

1 Orit Gat, “The Relatable Web,” in I Was Raised on the Internet, p. 77. MCA Chicago: Chicago, 2018. Gat is specifically referencing the term “meatspace,” a word with cyberpunk origins to denote the real, offline world.

3 An API, or application programming interface, is a point of access for a service, like Twitter, where other programs, apps, or websites can get and explore available data or interact with the service itself.

<br> is a selection of poetry named after the HTML element that produces line breaks. The project is organized by Isabel Prioleau. In response to our current exhibition, Larson Shindelman: Geolocation, <br> explores public-private overlaps, the digitalization of human experience, and the relationship between text and image, commenting on the place of poetry in our digital world.

View the poetry reading from March 2 below.