Tom Stanley: A Road to Nowhere 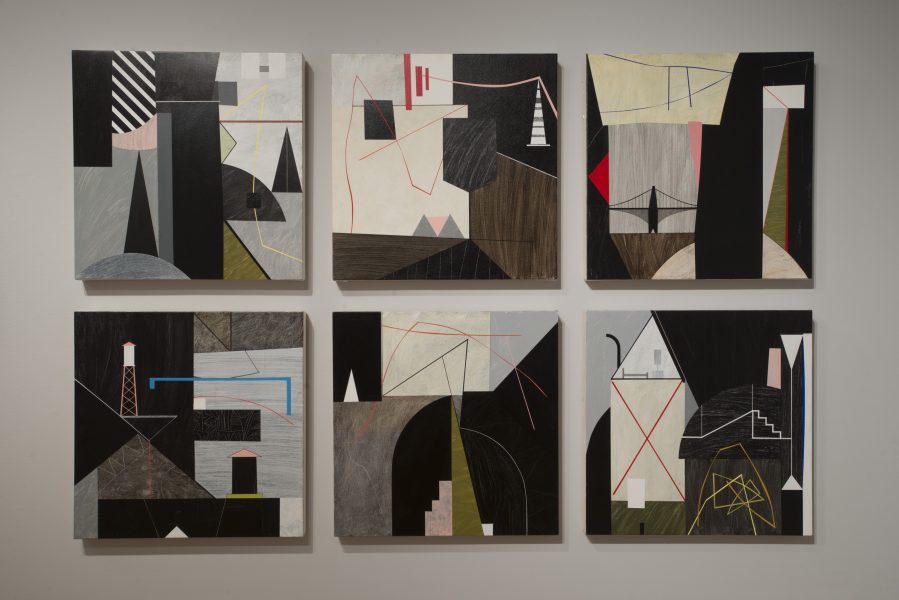 Whether it be on board a train, looking out of a car window, or simply walking around, Tom Stanley’s A Road to Nowhere series makes one feel as if they are observing passing landscapes on voyage to somewhere (or nowhere). The A Road to Nowhere collection includes four triptychs, two currently on display at the Halsey Institute (set A and C).

Stanley’s application of vibrant lines in the series compliment the neutral background and creates movement that bounces one’s attention from canvas to canvas. Through geometric shapes and distinctive travel icons such as a bridge, a water tower, and street signs, declare themselves in the work, generating an industrialized feel and adding to the adventure. A contrast between light and dark also presents itself in A Road to Nowhere and alludes to passing time as the artwork flows, perhaps between night and day. Furthermore, Stanley’s use of the sgraffito technique of drawing into wet paint magically exposes detail and texture. Solid geometric objects appear in contrast to the sgraffito technique in the paintings. Throughout the Scratching the Surface exhibition at the Halsey Institute, one can view the last decade of Tom Stanley’s artwork beyond A Road to Nowhere, tracing the progression of his staple technique of sgraffito.

Come check out Tom Stanley’s work on display at the Halsey Institute until July 8 and be inspired!