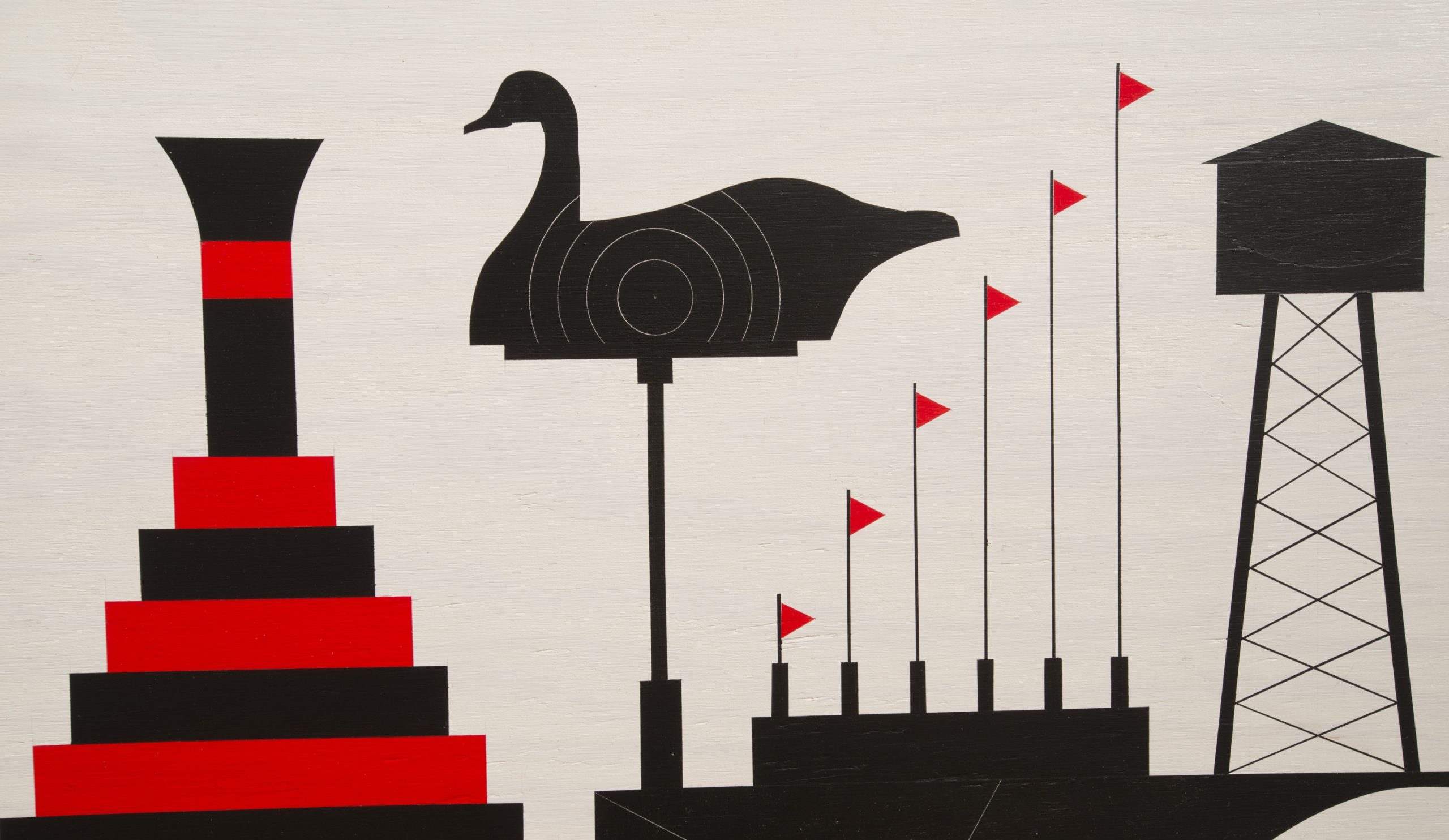 Over the past several decades, Tom Stanley has utilized sgraffito as a significant component of his abstract paintings. Popular in the Italian Renaissance of the 15th and 16th centuries, sgraffito refers to the practice of scratching a layer of paint to reveal a contrasting layer beneath it. In his geometric abstractions, the sgraffito adds an inherently expressive quality, creating a contrast between the frenzied scratching and his clinically precise lines and forms. His works also explore the history of painting techniques: beyond sgraffito, his works often contain drips of paint evoking Abstract Expressionism, and his expressive lines recall Surrealist automatic drawing.

Stanley’s abstractions draw on the forms of the world around him, typically including items like boats, ladders, water towers, and houses. In his recent Vessels series, his canvases riff on the motif of a boat, often portraying one of more such vessels amidst a plane of harried lines and sgraffito. Such a series emphasize the duality contained within his paintings: expressive yet measured, formally-engaged yet conceptually-driven, abstract yet connected to reality.

In Scratching the Surface, a range of Stanley’s paintings and drawings from the last decade will be on view. He will also be leading informal sgraffito lessons at the Charleston Farmer’s Market on May 20, 2017. Stanley will also give an artist’s lecture and gallery walk-through of the exhibition on June 17, 2017.

Born in Fort Hood, Texas, Tom Stanley grew up in Concord, NC, and attended Belmont Abbey and Sacred Heart colleges in Belmont, NC.  He received a MA in Applied Art History and a MFA in Painting from the University of South Carolina in 1980. Since then, Stanley has served on the faculty at a number of institutions including Arkansas College (now Lyon College) in Batesville, AR; Barry University in Miami, FL; and as the director of the Waterworks Visual Arts Center in Salisbury, NC. Currently the Chair of Fine Arts at Winthrop University in Rock Hill, SC, he was also the first director of the Winthrop University Galleries from 1990-2007.

His work has been featured at SECCA, Winston-Salem; gallery twenty-four, Berlin; Hampton III Gallery, Greenville, SC; the George Gallery, Charleston; and if ART, Columbia, among others. His curatorial projects include Worth Keeping: Found Artists of the Carolinas for the Columbia Museum of Art; New South Old South Somewhere In Between for Winthrop and the Levine Museum of the New South; and Still Worth Keeping: Communities, Preservation and Self-Taught Artists in collaboration with the South Carolina State Museum, and many more. His public art endeavors include Balancing Act in Simpsonville, SC, Journey in Raleigh, NC, and the Winthrop Monolith in Rock Hill, SC. He has also been commissioned by the Charlotte Area Transit to create a public installation at the Tom Hunter Station on North Tryon Street in Charlotte.