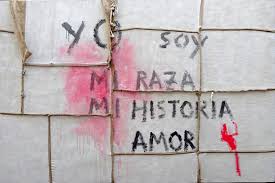 Born into post-revolutionary Havana, where he continues to live and work today, Roberto Diago has always drawn inspiration from the socialist propaganda of his surroundings. “Here in Cuba,” Diago has explained, “you see a lot of big billboards advertising unity and solidarity for the common good. I think that’s cool, and I told myself that I could also propagandize for things I feel.”[1] This realization first manifested in the form of a graffiti-inspired style which, like his current approach, sought to spark discourse around the racist residue of slavery in Cuba.

Diago’s emergence as an artist paralleled the fall of the Soviet Union, synonymous with loss of financial support for “the extensive (and expensive) welfare system that underwrote Cuba’s social justice, equality, and world-class indicators of basic wellbeing.” Alejandro de la Fuente, curator of Diago’s 2017 exhibition at Harvard University’s Cooper Gallery, explains that while “social inequity increased…along familiar lines of race, class, gender and religion,” it did so “in ways that most Cubans, born after 1959, had never experienced before.”[2] It seems inevitable that Diago, an Afro-Cuban artist, would respond to this marginalization.

Many of Diago’s early works feature bold combinations of text and imagery, making the Afro-Cuban experience hyper visible in response to centuries of explicit oppression as well as ongoing cultural erasure. de la Fuente describes these as “direct, confrontational, and didactic to the point of being insolent.” But he also notes the “visually effective and easily accessible” nature of the artist’s initial approach, reflecting “a concern that was important to Diago at [the start of] his career.”[3]

While Diago communicated overtly about racism throughout the 1990s, clearly referencing political propaganda, his messages have since become much subtler. Now communicating conceptually and abstractly, Diago uses carefully chosen materials and processes to propagandize for his Afro-Cuban experience. Ana Belen Martin Sevillano, Assistant Professor of Spanish and Cultural Studies at Queen’s University of Canada, cites “development of a specifically Black aesthetic…a distinctly Afro-Cuban universe” as the unifying theme of Diago’s career.[4]

On display here at the Halsey Institute is a quietly subversive exploration of what it means to be Black in Cuba. Strikingly colorful metalworks symbolize Oggun, the powerful warrior of metal in Afro-Cuban religion. But these images of strength also hold pain, with harsh welding that represents the scarring of Black skin. “Ciudad en ascenso,” the ascending city of charred wooden boxes, conveys the neglect of a marginalized neighborhood as well as the potential to be found there.

Diago’s Afro-Cuban universe couples empowerment and hope for the future with acknowledgement of past and present wounds, projecting an authenticity that equates to rebellion in nationalist, “post-racial” Cuba. And yet, as illustrated by Diago’s unfinished stitching of torn canvasses, true unity can only follow proper healing.