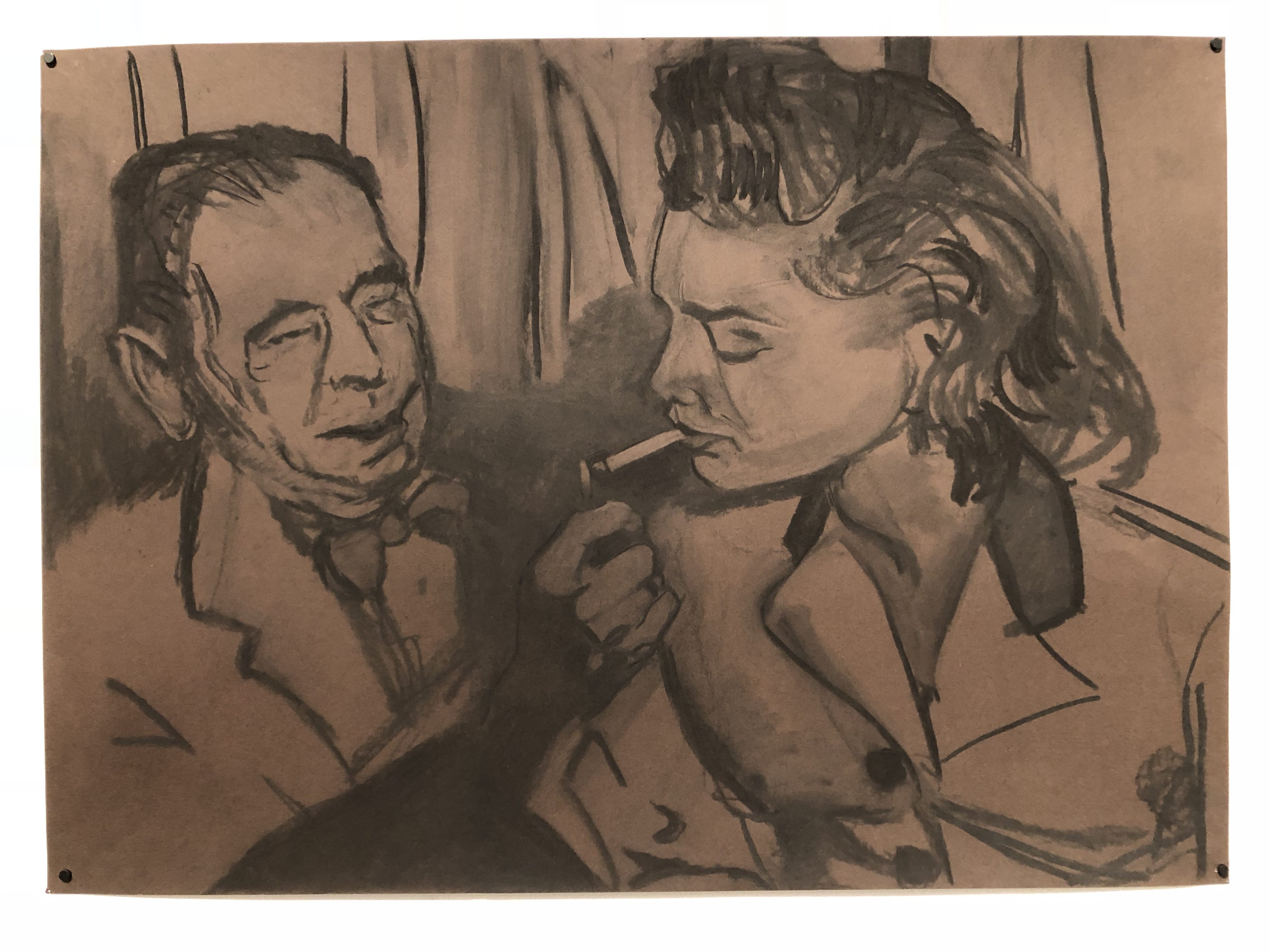 Tell me a little bit about why you made this piece of art.

Film photography, and black and white films. I find film noir striking because film was so delicate, black and white photographs and movies captured scenes where it seemed everything around lighting and positioning of the characters was specifically planned. Because I prefer working in charcoal, these dramatic scenes attracted my attention. Specifically, to smoking, because I’ve grown up in a culture that condones it, I’m exploring a time period that I won’t experience. Between two people, it’s an intimate act and entails a narrative that follows (that I won’t experience).

What art/artists do you most identify with?

I am a fan of Shepard Fairey, Banksy. How they capture an image as minimally as possible/blocking in shapes and choosing lines of representation. Classically I’m drawn to Georges Seurat and how he captures people along with his charcoal drawings capturing light and form. I am also drawn to Gustav Klimt in how he combines the plane he’s working on with his subjects and as a result, a clear distinction between the two is lost. Finally, Edgar Degas and how he quickly captures from, his strokes, and lines along with a dash of color.

What themes do you pursue in your art?

I enjoy drawing people because of the curves, angles, and variety. It never gets old (age, wrinkles, expressions, motion). Something with a narrative that keeps you curious.

Why did you decide to use charcoal?

I use charcoal because it’s cheap, easy to use, and I can experiment without worrying about the consequences of expense. It’s easily adaptable and equally easy to cover, allows me to edit.

Name something you love about art, and why.

I love the science and mathematics of art. What I mean by the science is how you’re trying to attack an image in a way that hasn’t been done before, even if that’s just speaking about yourself. The mathematics is when I’m in the process, and I don’t mean by gridding or calculating. It’s looking at shapes and forms, scaling them up to others with your eyes. I try to look at one shape I’ve made and think about that shape in terms of the rest that I make. Those aside, it’s freeing. When I draw I weirdly feel like I’m sculpting, trying to find a figure in space. You can feel when it’s wrong by looking at it, sometimes you have to ignore that feeling, though, to stylistically achieve your goal and to not draw in a photographic manner.