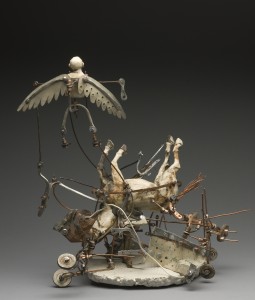 This exhibition comprises sculpture, installation, paintings, drawings, and sketchbooks that chart Aggie Zed’s unique working methods in a variety of media. Born in Charleston and raised among farm animals on Sullivan’s Island, South Carolina, Zed graduated from the University of South Carolina with a BFA in painting and sculpture. Shortly thereafter, she moved to Richmond and, later, Gordonsville, Virginia, where she lives and works today.

Zed’s studio practice is eclectic and varied. Often starting with images from her sketchbook, she may develop some of these concepts into paintings and others into sculptural tableaux or installations. Her subject matter is nothing less than the sum of human civilization, with an emphasis on our relationship to the animal kingdom. Human and animal figures collide with furniture or landscapes; rabbits sprout wheels or wings, while horses drown in collapsing scaffolding. Zed’s dreamscape narratives probe the inner reaches of the subconscious mind.

Although Zed’s work derives much of its meaning from literary associations, her imagery teems with invention and startling leaps of imagination. Her visual poetry conjures a world in which logic and rationality take a comfortable backseat. Human foibles and impulses are placed in the foreground. And even though she works in different media, her conceptual approach remains consistent throughout.

The paintings are rendered in mixed media on paper. They depict humans and/or animals, often located within a domestic space or farmyard. There may be references to dinosaurs seen from the windows or other anachronistic details. Mirrors, doorways, and framed artwork on the walls become portals to other realms. Animals play the role of participant observers to the human drama. They are depicted variously as companions, sages, sources of amusement, means of transportation, and foils to daily tasks.

The sculptural and installation works are complex tableaux that illuminate aspects of the human saga. Sculptural works that the artist calls “scrap floats” appear as if in some sort of cosmic procession, enacting scenes that are at once strange yet familiar. The collision of disparate materials and elements in these works mirrors the beauty and fragility of the human condition.

Derived from the title of one of the artist’s works, Keeper’s Keep alludes to British usage of the term “keeper” for “curator,” and plays on the double meaning of “keep” as both noun and verb. Aggie Zed is a storyteller whose works take us out of our consensual reality and into a world filled with absurdity, ambiguity, and the gifts of artistic imagination.