This exhibition was organized by International Arts and Artists and is co-sponsored by the School of Humanities and the School of the Arts in conjunction with a semester-long focus on The Jazz Age.

Funded in part by The Humanities Council SC, a state program of the National Endowment for the Humanities: inspiring, engaging, and enriching South Carolinians with literature, history, culture, and heritage. 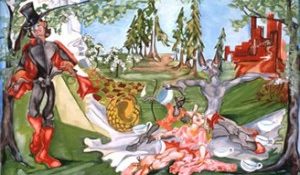 Although best known as the beautiful and flamboyant wife of writer F. Scott Fitzgerald, Zelda Fitzgerald was quite an accomplished artist in her own right. Her creative endeavors in writing, dancing, doll crafting and painting were highly successful yet overshadowed by her husband’s work. Born at the turn of the century, July 24, 1900, Zelda was raised in a family and culture that promoted feminine grace, but she was determined to create her own unruly and extravagant path through life. By the age of eighteen, she was already drinking and smoking and bobbing her hair. Shortly after she turned twenty, she met and married F. Scott Fitzgerald,who even at this time was one of America’s most promising young authors. Soon after the wedding, the couple moved to New York and celebrated the success of Scott’s first book, This Side of Paradise. The wild pair, who split time between New York and Paris, became well-known for their extravagant lifestyle that epitomized the roaring twenties. Zelda and Scott were seen as celebrities during the 1920s, and as their granddaughter Eleanor Lanahan states,”They invented a kind of American self-image of fun and irresponsibility. People still like that. They established that as an American identity.” In 1921, the Fitzgerald’s only child was born, a daughter whom they named Scottie. During this time, Zelda painted periodically and wrote a few social commentaries for Metropolitan Magazine, McCall’s and the New York Tribune.

As her husband Scott became more successful, Zelda sought to bolster her own artistic reputation. She took her first painting lesson in 1925. Painting would eventually become the one artistic expression that Zelda pursued her entire life. However, she only painted casually during her restless years with Scott and the majority of her works were painted in the last fourteen years of her life. Zelda began creating her detailed paper dolls in 1927, and during the same year, at the age of 27, she threw herself into the art of dance. She studied ballet with the director of the Diaghilev Ballet, and even though it was far too late in her life to become a successful dancer, she spent eight hours a day practicing. During this time, she also wrote five stories for College Humor. Scott’s name was often added to the ledger of these stories so that the family could earn additional money for her writing. On several occasions, Scott would also credit his wife for helping him write parts of his stories.

In 1930, shortly after the crash of the stock market, Zelda suffered the first of several severe psychological breakdowns. She spent several months in a mental hospital, after which time doctors declared her sickness in remission and she returned with the family to Europe. She began writing her first book, Save Me the Waltz, at this time, but while in Europe she suffered another breakdown and doctors in Sweden diagnosed her with schizophrenia. When the family returned from Europe, Zelda finished her novel and wrote seven short stories, one of which was published by Scribners. Her book was a very transparent self-portrait of herself, yet before its publication, Zelda removed any references to mental illness since Scott was working with similar subject matter in his novel-in-progress, Tender is the Night. Scott balked at the overlapping subject matter and as a result, Zelda stopped writing stories. Instead, she wrote and produced a play in Baltimore entitled Scandalabra. Unfortunately, the three hour long production proved to be too lengthy and the show eventually flopped.

During this time, Zelda continued to paint two hours a day as her psychiatrists had recommended. In October 1933, she took part in the Independents’ Show in Baltimore. She suffered her third breakdown in 1934, and in an effort to raise her spirits, Scott helped organize an exhibition of Zelda’s paintings at the Cary Ross Gallery in Manhattan. Zelda threw herself into frenzied preparation for the show and Scott became concerned that her overzealous interest in her painting, similar to her dancing, was beginning to take a toll on her mental stability. In 1934, Zelda published her last article in Esquire and began to concentrate on painting as her sole artistic outlet. In the following decade, Zelda exhibited her works in only a few selected exhibitions and eventually gave away many of her paintings to family members, friends and doctors.

From 1930 to 1948, Zelda was intermittently hospitalized for schizophrenia. In 1934, she was hospitalized for the third time and Scott lost hope that she would ever make a full recovery. He moved her to a slightly more affordable hospital in 1936 and took a position as a script writer in Hollywood. In 1940, he died suddenly of a heart attack at the age of forty-four. Zelda, unfortunately, was too sick to attend Scott’s funeral in Rockville, Maryland.

Despite her struggles with schizophrenia, Zelda’s daughter described her mother as being quite lucid for very long periods of time. She spent the majority of her days painting a variety of subjects that reflected her interest in fairy tales, her appreciation of landscapes and flowers, and in her Alice in Wonderland series, her wonderful sense of the absurd. The majority of her remaining paintings were completed in the forties, and Zelda became fanatical about religion in the final years of her life, a penchant which is clearly reflected in many of her later pieces. Tragically, Zelda died in a hospital fire in 1948. Many of her paintings were also lost in the fire.

Zelda’s granddaughter Eleanor Lanahan is also an artist and has dedicated herself in part to further explaining Zelda’s life. She states, “The misconception is she (Zelda) was this forlorn, forgotten, unproductive woman when really she developed her own separate life.” More than 50 years after Zelda’s death, Lanahan and IA&As Zelda By Herself exhibition help ensure that Zelda’s legend endures. As Lanahan states, “She danced. She painted. She wrote. And she lived. Those were all art forms for her. It’s her total being that is a legacy.”

*Eleanor Lanahan quotes in this section are from Panama City’s The News Herald article, Lanahan determined to have a famous grandmother’s art remembered, by Troy Espe.

My grandmother, Zelda Fitzgerald, was born in July 24, 1900 in Montgomery, Alabama. For many years, I knew almost nothing about her, except that she made gorgeously brilliant art. Her paintings are among the remarkably few mementos of the whirlwind lives of the F. Scott Fitzgeralds, and it is through her art that I have found my closest connection.

It seems that Zelda had always painted, but tossed her talents aside in 1920 when she became the charming, reckless, and highly quotable wife of the talented F. Scott Fitzgerald. It was when they moved to France, in 1924, that Zelda began to associate with an entirely artistic crowd. In the company of Fernand Léger, Constantin Brancusi, Pablo Picasso, Georges Braque, Ernest Hemingway, Gertrude Stein, Gerald Murphy, and her own husband who had just produced the Great Gatsby, Zelda’s ambitions were ignited. Encouraged by Scott, she wrote several short stories, and passionately devoted herself to ballet. In 1930, her pursuit was cut short. She had a nervous collapse, was diagnosed with schizophrenia, and was persuaded to abandon dance. In 1936, Zelda entered the Highland Hospital in Asheville, North Carolina, which is where she spent the last 12 years of her life. It was there she began to focus her creative energy almost exclusively on visual art. In 1940, Scott died unexpectedly of a heart attack, and Zelda’s paintings allowed her to revisit happier times.

When her first grandchild, my brother Tim, was born in 1946, Zelda set to work making him a luscious collection of paper dolls, as well as painting scenes from children’s stories, such as Alice in Wonderland. Most of the paintings in this exhibit spent half a century stored in our attic, along with the paper dolls – among several boxes of letters. I would visit them illicitly, marveling at their brilliance and the riddles they contained. Her paintings were often personal dreamscapes, with characters caught in a moment of vulnerability, learning drastic moral lessons, but dancing always, as a response to life. I appreciate Zelda’s paintings as symphonies of color, as a journey into her romantic world. Some of the compositions are reminiscent of stage sets upon which androgynous dancers, with utmost discipline, float above the earth. Their large feet signify the pain of dance. The upturned heads, do they express anguish, a proper posture for dance, or homage to the divine? And Zelda always painted flowers: that was one of her great solaces. She imbued them with symbolism, and gave them liberally as gifts.

I never had a chance to meet this fascinating woman, as she died in 1948 during a fire at Highland Hospital. But in many ways, my grandmother’s spirit is a part of me. It has always been as if her fresh, youthful scent lingered in our house, and her paintings lend much insight into her turbulent life. I entirely agree with the motto she emblazoned on the brochure for her only one-woman exhibition, in New York in 1934, “Parfois La Folie est La Sagresse.” – Sometimes, Madness is Wisdom.

FIGURE OF SPEECH
A WOMAN’S LIFE