Both Tom Stanley and Tim Hussey challenge traditional notions of figurative painting through the juxtaposition of narrative possibilities. Stanley will be showing a group of new works strongly informed by his extensive curatorial work with self-taught artists. Hussey will exhibit a selection of large-scale introspective painting/collages produced over the past three years. 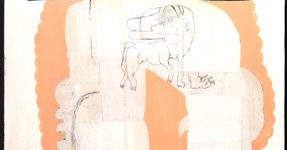 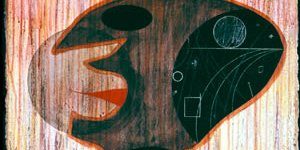 Tim Hussey, a Charleston native who has spent the last twelve years working in New York as an illustrator, designer, instructor and painter, received his BFA in Illustration/Painting from Rhode Island School of Design in 1992. Starting in 1992 as a set designer for MTV, where his paintings were shown on air as a live performance, he then went on to do editorial illustration for clients ranging from Ray-Gun to The New York Times to Rolling Stone. While maintaining his illustration/painting career, in 1994 he began art directing for magazines Musician, GQ, Outside andIcon. Hussey received the “Top 20 Images of the Year” award from American Illustration/2001. For the past three years Hussey has refocused his creative energies on his paintings, which have been featured in numerous group and solo exhibitions throughout the U.S. The mixed media paintings in this exhibition focus on large obscured figures with textual inclusions. They allude to the traditional narrative elements of illustration while fully satisfying a more developed sensibility as independent works open to broader interpretation.

SUPERNATURAL
ZELDA BY HERSELF