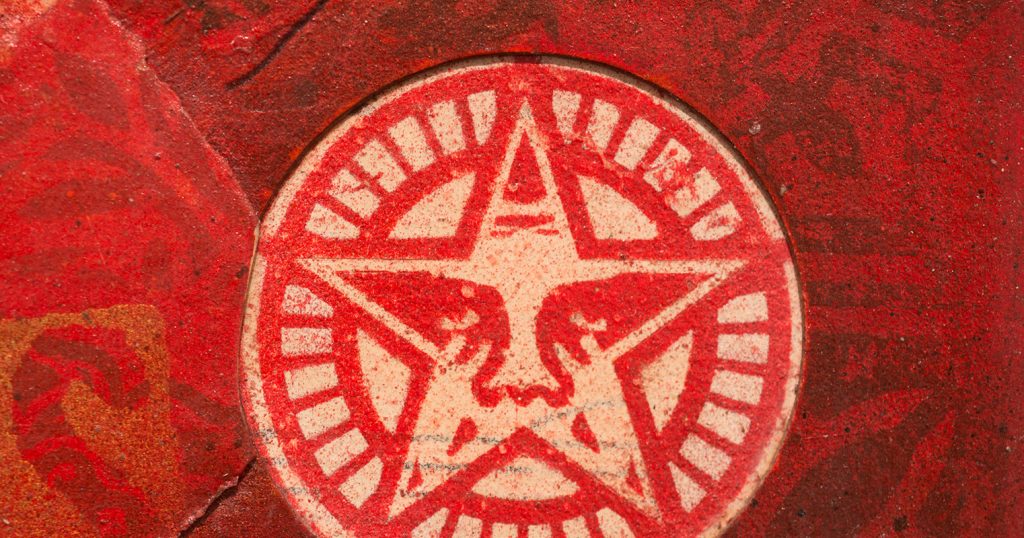 The Insistent Image: Recurrent Motifs in the Art of Shepard Fairey and Jasper Johns features new work by Shepard Fairey and a survey of prints made between 1982 and 2012 by Jasper Johns at Universal Limited Art Editions (ULAE). Both Fairey and Johns recycle graphic elements in the works they produce and in each case these repeated fragments gain new meaning through fresh juxtapositions and associations. Additionally, both artists have the capacity to transform the quotidian into the iconic. Each artist will occupy a separate gallery space, and no attempt is made at comparing their works. Rather, this exhibition demonstrates the power of this strategy of image repetition in the works of these two distinguished American artists.

For his first major exhibition in his hometown, the Los Angeles-based artist created an entire new body of work collectively entitled “Power & Glory”. According to Fairey, the idea behind these works is the celebration and critique of Americana with an emphasis on the meanings of power. Staying true to his rebellious punk background, and the social and political critique in his work, the new pieces are full of “in your face” slogans and statements about power, security, protection and similar subjects. Known for his visual remix of logos, symbols, and imagery, the new paintings, sculptures, works on paper, and screen prints explore and analyze everything that is both good and bad about American lifestyle and culture. Along with exhibiting his works in the indoor space, Fairey will be creating a series of large-scale public murals in locations throughout downtown Charleston, visually and thematically related to the show.

Jasper Johns will be represented by a series of sixteen prints made in collaboration with master printmaker Bill Goldston at Universal Limited Art Editions in New York. This selection emphasizes many of Johns’ recurrent motifs and themes over the past 30 years including flags, the face/vase optical illusion, targets, galaxies, gestures from American Sign Language, and fragments of works by famous artists such as Picasso, Holbein, da Vinci, and George Ohr, and others. Through a special arrangement with the artist and ULAE, we are able to borrow some of Johns’ most iconic works for this exhibition.

Johns was longtime friends with William Halsey, the artist for whom the Halsey Institute was named.

Bill Goldston has been Jasper Johns’ master printmaker for over 30 years.

Geographies of street art: Shepard Fairey and the trans-scalar imagination

Born in 1970 in Charleston, SC this will be Shepard Fairey’s first major exhibition in his hometown. Beginning in the 1980s with an obsession with skateboard culture and a sticker campaign that went viral, Shepard Fairey has become one of the most visible street artists in the world. His seemingly ubiquitous Obama HOPE poster helped bolster his career (and, arguably, President Obama’s), and the National Portrait Gallery in Washington, DC acquired it for their permanent collection. Straddling the realms of fine, commercial, and street art, Fairey’s work resists easy classification. The artist exploits the gaps between these genres to produce works that frequently take on social and political issues. Fairey has become an articulate advocate for free speech and progressive ideas. His work is included in the collections of the Smithsonian, the Los Angeles County Museum of Art, the Museum of Modern Art in New York, the Museum of Contemporary Art San Diego, the National Portrait Gallery in Washington, D.C., and the Victoria and Albert Museum in London.

Los Angeles-based artist Shepard Fairey has created an entire new body of work for this exhibition, collectively entitled Power & Glory. According to Fairey, the animating concept behind these works is both a celebration and critique of Americana, with an emphasis on the meanings of power. Staying true to his rebellious punk background, and the social and political critique in his work, the new pieces are full of in-your-face slogans and statements about power, security, protection, and comparable subjects. Known for his visual reappropriation of logos, symbols, and imagery, the new paintings, sculptures, works on paper, and screen prints explore and analyze the complex sociopolitical gumbo that constitutes contemporary American culture. Along with exhibiting his works in the indoor space, Fairey has created a series of large-scale public murals, visually and thematically related to the show, in locations throughout downtown Charleston.

Taken in toto, Fairey is questioning the notion of American hegemony within the context of current geopolitical upheavals. As a country, the United States has long maintained the idea of American exceptionalism, a concept ripe for critical analysis. President George H. W. Bush famously said we would prevail in the Gulf War because “God was on our side.” Quotes such as these offer creative opportunities for Fairey’s brand of social activism through art. His method is to use metaphor to uncover the hidden agendas and political currents flowing just beneath the surface.

In one of the murals for this show, Fairey is speaking directly to the multiple meanings associated with the word “power” through the text, “Enjoy POWER & GLORY While They Last.” Power derived from fossil fuels has now been proven conclusively to be contributing to climate change, but just as urgently has the quest for the raw materials for this power lead us into wars and near bankruptcy. The other meaning of power, as in governmental control and corporate greed, is also a driving factor in global politics. With China’s rise as the United States’s largest debt buyer, we stand to lose much more than the bragging rights for top superpower. Fairey highlights this dangerous game, emphasizing that it is our role as citizens to challenge the status quo politics surrounding these debates.

His use of such recurring motifs as a star, sunbeams, chevrons, the human eye, and Andre the Giant, among many others, playfully mock the propaganda strategies used by totalitarian regimes. Their theory is, if a symbol or message is repeated often and loudly enough, it becomes accepted as truth. Fairey slyly points out the power of visual imagery to move us to action, in both good and bad ways.

Shepard Fairey’s art has an undeniable visual appeal, with its limited palette and pleasing geometries, yet the messages conveyed through his work are anything but neat and tidy. Despite the heaviness of the content, Fairey remains optimistic and hopeful that “the masses” will rise up in revolt against the insidious forces of greed and politics. His works challenge viewers to reconsider their place within consumerist culture. By revealing our complicity in the larger systems at work, and encouraging change, Fairey acts as a beacon for our collective social conscience. Every culture needs its artists.

YOUNG CONTEMPORARIES 2014
THE INSISTENT IMAGE: RECURRENT MOTIFS IN THE ART OF SHEPARD FAIREY AND JASPER JOHNS