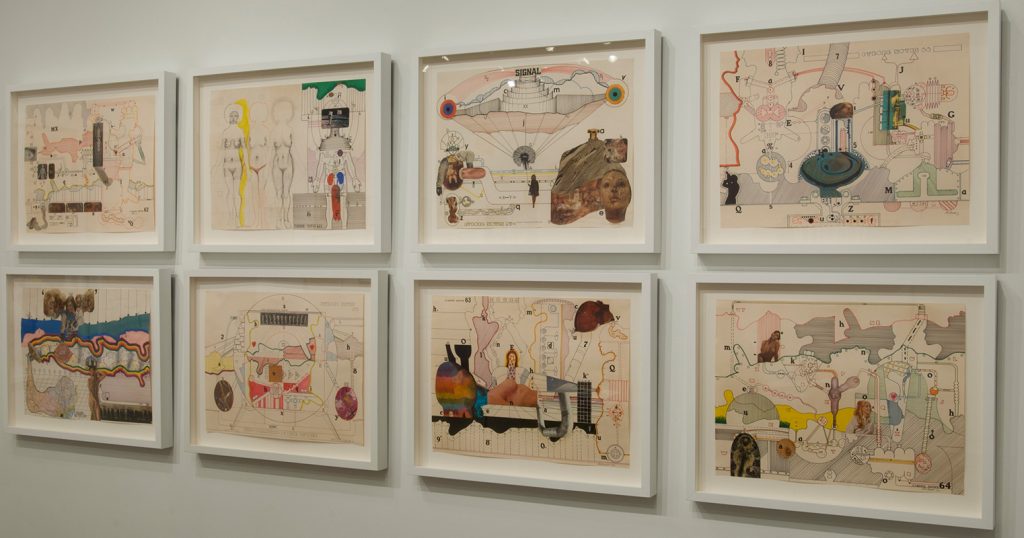 ZanFagna proved to be a restless innovator and inventor. His notebooks, journals, and early works overflow with remarkably prescient descriptions of such things as the development of the personal computer and the Kindle—“all the world’s books in the palm of your hand”—and were included in an exhibition at the Whitney Museum of American Art, in 1971. He also anticipated large-scale use of solar panel technologies and the use of biological processes, algae and ethanol, to generate energy.

Through a remarkable journey of discovery, chronicled in dozens of densely illustrated and annotated sketchbooks, Don ZanFagna became obsessed with the idea of designing a form of sustainable architecture that was in harmony with natural processes—a structure he called the Pulse Dome. From roughly1971 through 1995, he researched world indigenous structures,insect architecture, wombs, and such natural forms as caves,tunnels, and volcanoes to learn what had been done already and what was still likely to be accomplished by others in relation to sustainable human architecture. Among other lines of inquiry, he explored Palladio’s notebooks, an amalgam of many other architects’ notes, to try to unlock the secrets of the Egyptians’ sacred geometric harmonies.

The Pulse of Charleston panel discussion will feature local architects and preservationists. How are Don ZanFagna’s theories reflected in Charleston? One can argue that historic buildings and their preservation embodies the concepts that he was trying to promote – perhaps in surprising ways. Panelists include Mark Sloan, Winslow Hastie, Reggie Gibson and Whitney Powers. Reception to follow. Co-sponsored by Historic Charleston Foundation.

The Bio-Logical Architecture: Past, Present, and Future symposium will will bring Linda Weintraub, an eco-art-architecture writer, and William Katavolos, an architect and designer, together with the Halsey Institute’s curator Mark Sloan to discuss eco-bio-architecture. Panelists will examine many topics relevant to the subject, including liquid architecture, and the ways in which some of ZanFagna’s seemingly far-fetched ideas have become a reality. The symposium will take place in the Recital Hall, Simons Center for the Arts, 54 St. Philip Street. Reception to follow in the Halsey Institute galleries. The event is co-sponsored with the College of Charleston’s First Year Experience program.

“FORM FOLLOWS FREQUENCY… The visual information presented here comes from my slides. It is material I have been collecting for a number of years and relates DIRECTLY to the central philosophic and thematic aspects of INFRA/ULTRA. The derivation and meaning of INFRA/ULTRA has been stated elsewhere in I/U notebooks and has been directly and indirectly recorded in slides, models, drawings, diagrams, conceptual art/architectural collages and drawings, and other forms. To quote directly from I/U Flare Sheet #1, Jan 68 – The invisible will become more visible – already contours, patterns, densities of the NEW… and NEWER are getting clear… There is a different consciousness trying to break free – the hardware is only mechanism; we need new metaphors of IMAGINATION and SPIRIT. Can we derive sociological, psychological, artistic, architectural, environmental equivalents of EKG’s voiceprints, sonograms, cutaneous communications, x-rays, oscillograms, telemetry, etc.?? What has happened to PROCESS? What is NATURAL? ARTIFICIAL? The boundaries are blurring. We don’t need BULK any longer. We need NEW interfaces, NEW resonance ranges, NEW global linkages of people, pataphysical frequencies and free exchange… alterations in information controls, NEW art, NEW architecture – a whole-life sensory and structural release from 15,000 years of psychophysical and environmental dead-weight!” – ZanFagna

CLEMSON ARCHITECTURE'S ROLE IN THE PROJECT

The Halsey Institute has commissioned Clemson Architecture Center in Charleston to create a structure inspired by Don ZanFagna’s forward-thinking concepts of architecture and materials. The architecture students in Studio V, led professor by David Pastre, are working on a semester-long project researching Don ZanFagna and his dream domes, along with other 70s era eco-pioneers. How the students interpret the material will be unveiled on Saturday, December 8 after the closing symposium. This will mark the Halsey Institute’s sixth collaboration with Clemson’s Architecture program.

ABOUT THE PANEL DISCUSSION

The Pulse of Charleston panel discussion will feature local architects and preservationists. How are Don ZanFagna’s theories reflected in Charleston? One can argue that historic buildings and their preservation embodies the concepts that he was trying to promote – perhaps in surprising ways. The discussion will take place at in the Halsey Institute’s galleries and attendees will be surrounded by the work of Don ZanFagna. The exhibition will open at 5:30pm and the panel will begin at 6:00pm. Panelists include Mark Sloan, Director and Senior Curator of the Halsey Institute; Winslow Hastie, Chief Preservation Officer for Historic Charleston Foundation; Reggie Gibson, architect with Gibson Guess Architects and Whitney Powers, President of Studio A. Inc. A reception will follow the discussion. Co-sponsored by Historic Charleston Foundation.

ABOUT THE SYMPOSIUM COMPONENT

A symposium entitled Bio-Logical Architecture: Past, Present, and Future will be presented on the last day of the exhibition, Saturday, December 8. The Halsey Institute will bring Linda Weintraub, an eco-art-architecture writer, and William Katavolos, an architect and designer, together with the Halsey Institute’s curator Mark Sloan to discuss eco-bio-architecture. The speakers will explore the cultural climate of the 1970s and present various competing alternatives to conventional architecture. A reception will follow in the Halsey galleries. The symposium is co-sponsored by the College of Charleston’s First Year Experience program and the Halsey Institute.

The symposium will begin at 2:00pm in the Recital Hall in the Simons Center for the Arts at 54 St. Philip Street. The symposium and reception are free and open to the public.

Published by the Halsey Institute of Contemporary Art to accompany the exhibition Pulse Dome Project: Art & Design by Don ZanFagna, the catalogue includes an essay by Mark Sloan, senior curator and director at the Halsey, as well as words by the artist, Don ZanFagna.

As a Halsey Institute member, you could receive 20% OFF this publication and all Halsey merchandise!

The Halsey Institute of Contemporary Art at the College of Charleston, South Carolina has produced this traveling exhibition and its attendant activities. Funding has been provided by generous grants from the Graham Foundation for Advanced Studies in the Fine Arts and the Bishop Family Foundation.