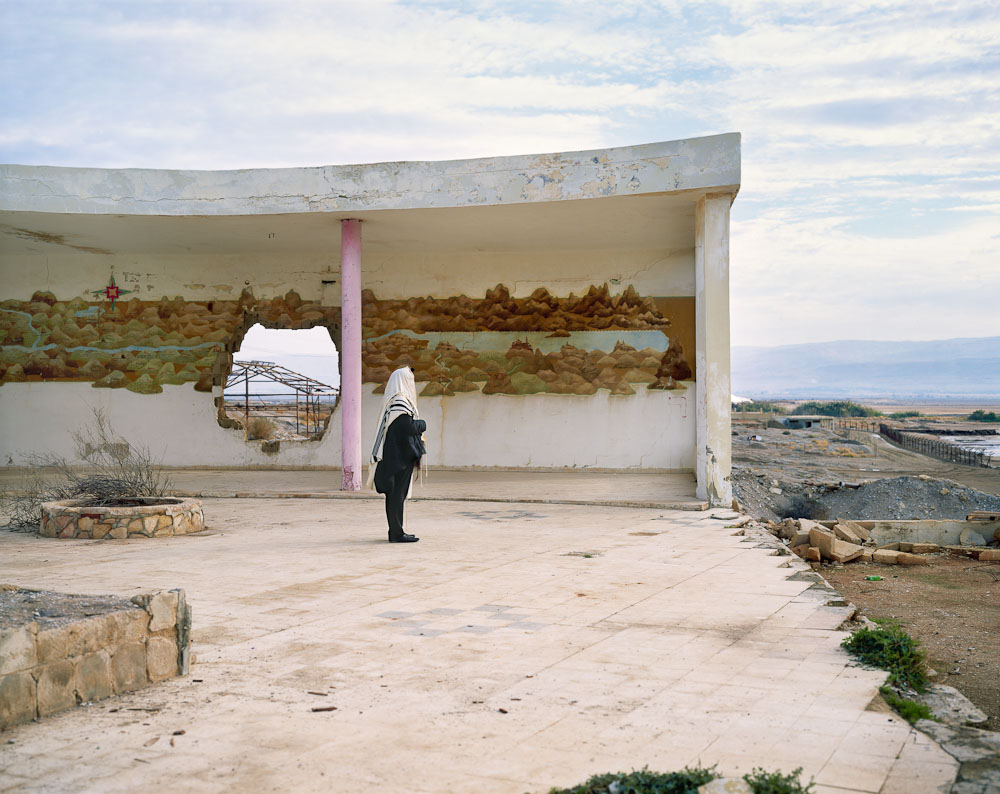 Inspired by the Orthodox Jewish tradition of the Messiah (the Prophet) who will arrive riding on a white donkey, this 10-year photographic project features portraits and landscapes made in Israel. This project is the result of Yaakov Israel’s search for a deeper understanding of his country and an attempt to relay his personal experiences on the Israeli reality with a broader sense of belonging to the global human collective.

Curated by Director & Senior Curator Mark Sloan, the exhibition consists of 42 images, printed in various sizes. Though his work has been shown widely in exhibitions throughout Europe, this will be Yaakov Israel’s first exhibition in the US.

A book documenting the project has been published by Schilt Publishing (Amsterdam) in 2012.

He was selected Winner of the PHotoEspaña Descubrimientos PHE12 Award, as one of the three winners of the Conscientious portfolio competition, and a Critical Mass finalist, Top 50 by Photolucida. His photographs are in the collections of The Knesset (Israel’s house of parliament), Haifa Museum of Art, The Open Museum of Photography at Tel-Hai, and Ashdod Art Museum. His first monograph The Quest for the Man on the White Donkey was recently published by Schilt Publishing, Amsterdam. Yaakov Israel is represented by Fifty One Fine Art Photography, Antwerp and Oslo 8 contemporary photography in Basel. 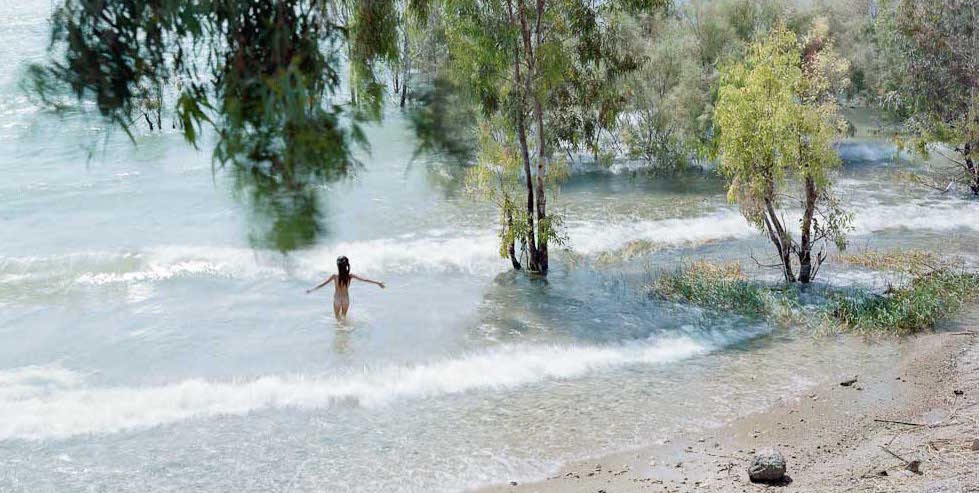 These are images of an often overlooked, if inevitable, dimension to the human condition: the inescapable spatiality of life; our embeddedness in places. Even nomads follow well-worn pathways across their extended homelands; most of us are more rooted still. Our materiality makes it so, and even the most apparently disembodied cyber experiences are anchored in places—at server farms, in low earth orbits, and, of course, in the momentary places we stand tethered, ogling.

Yaakov Israel’s work is about place, so much so that the more intensely you look at these photographs to make them about a specific place, the more elusive their meaning becomes. Each of these images is a vignette that opens a window on a complete story. Threaded together, the photographs hint at a bigger picture still. What remains, as happens with so many good stories, is tantalizingly just beyond our ken, even if occasionally we may think, just for a while, that we get it. It is not that this place is unknowable—rather, it is that there are so many shifting ways to know it, to know all places.

A sense of the complexity of places is a takeaway from these photographs. There is a layering process at work in Israel’s images that parallels the imbuing of meaning into places themselves. This layering is a reflection of the hard work Israel undertakes in repeatedly journeying across his land.

Journey, a word that in Romance languages equates to the idea of a day’s labor (jornada, journée, giornata), speaks to Yaakov Israel’s long days with a large-format view-camera toiling to understand anew his place, and, ideally, transfer his moments of clarity to his negatives. Each portrait is an archetype for people encountered over years of such journeying; each landscape momentarily revealed is, above all, metaphoric.

The large-format camera is intrinsic to his purpose. The resulting images allow for such detail that each time we return to a photograph new things heave into view. The images become shapeshifters. As even minor novel elements push up against everything else, the entire image needs to be rethought.

Furthermore, Israel deliberately seeks out the layering of history in his fabled land. The very title of his project, The Quest for the Man on the White Donkey, comes from an encounter with a Palestinian farmer mounted just so, echoing a sacred prophecy that thus would the Messiah return. Always, then, for Yaakov Israel, these landscapes are understood as palimpsests, where the new merely overwrites what went before—never erasing it—so that it can manifest itself in the landscape and in his photographs. The juxtaposition of old and new in these places, where Hasidic Jews pray in gas stations, embodies this conviction. The intrusion of cables and wires into so many of his images draws literal and figurative lines under these as landscapes ever in transition. (Figure 1, Burnt Landscape #2, Jerusalem Forest, 2011)

There is complexity, of course, in all places deeply considered. Yaakov Israel’s home-place, however, wears its complexity very much on its sleeve. This, after all, is a territory so charged that we cannot quite know its name: the State of Israel, Israel-Palestine, Palestine, Eretz Yisrael . . . Naming here is an act fraught with politics, a lightning rod around which this place flashes black and white.

Yet, the name of this place matters to us. It looms large in our consciousness. These lands are evocative as well as material places. Sacred to so many traditions for millennia, more recently this land has been woven, too, into narratives about geopolitical toeholds and beacons of democracy. It is a place that can shade more or less into our way of being, layering in new complexities still.

In this light, this is a territory where our political lexicon morphs and is irrevocably changed. It is here that we learn to think in terms of road maps leading to the most prized destination of all: peace. Here, the verticalization of space means that now we need to map territory in three-dimensions, to account for bridges and sewer systems weaving together otherwise-disconnected component pieces of the future two-state solution. The national territory is settled along ethnocratic lines just as nineteenth-century Europeans controlled space to commandeer entire continents from America to Australia.

Unsettled, then, by large currents of history, boundaries have shifted here at least since the Great War, whose centenaries we will continue to celebrate in coming years. Compounding this is a series of subsequent conflicts of greater and lesser intensity, indeed even over summer 2014 as this essay is finalized. Such upheavals add to the intensity of this place, imbuing it with ever more meanings, pulling it again and again into our orbit, into our consciousness.

It is tempting to mark it as a thorny place, where barbed wire likes to spring from the ground, on a spectrum of hardness from coarse grass, through wire, to the desert itself, reflected in the eroded hills in the distance. (Figure 2, Fence, HaBiqah, 2006) The sky is inscrutable in this photograph. A hint of red and we could be on Mars. In many of the portraits here, environmental determinists would chalk somber expressions down to lives lived in a Mediterranean landscape always in range of the looming desert.

Yaakov Israel rebels against that impulse. His eye is drawn to the quotidian lived experiences in the fabric of this place. His narrative runs counter to big stories about his homeland. Those solemn faces are a reflection of the strained circumstance of chance meetings with strangers in the hinterlands, and the subjects’ resignation as Israel painstakingly frames and prepares his large-format photography. His view-camera and process are anachronisms in an age of digital selfies, and there is not even the relief of the customary command now to smile. And there may be little to smile about for the homeless, for members of the armed forces, for farmers weary from their days in the fields—but these are the people on the fringes that Israel is drawn to.

Israel’s journeying into his country initially followed figurative trails blazed by late-nineteenth-century photographers on the great surveys of the American West, as the United States took stock to take control. His work, however, has more in common with subsequent generations of American photographers tracing new topographical lines a hundred years later, drawn to everyday people and vernacular landscapes.

This connection only goes so far. These photographs are avowedly not in the surveying mode, and the artist rejects the notion that they present us with any sort of comprehensive picture of Israel. This is because of the nature of his country. It is far too paradoxical a place to be understood, let alone explained, through photography. Furthermore, Israel’s intention is to work around the margins of society in that part of the world. And, the nature of photography itself is for him as ephemeral as light momentarily illuminating a place or a person just so.

Yaakov Israel echoes the motif of Israel as an island in drawing a contrast with the long, linear automobile journeys across vast American spaces in his forays into Israeli hinterlands, repeatedly for running always into the limits of those spaces. His determination to showcase parts of that territory not normally celebrated, or held up to the light, moves us deep into terra incognita.

What emerges from Israel’s photographs is a parallel cartography of his homeland. He is mapping off the beaten track and representing place through an alternative medium. His cartography, unlike traditional maps we invest with totemic authority, creates spaces for us to commune with his Israel. It is in those interstices created between the artist’s looking, our own, and the image itself that these images make sense.

Dissonance niggles. The beauty of the images invites us in. Ensnared, we puzzle over his alternative map of these territories: a woman sleeps, vulnerable in the desert; fading pink columns adorn a decaying air force base. A boy steadies himself, camera in one hand, kingfisher in the other: release and capture. Machine guns rest atop concrete picnic tables. A bather, alone, hemmed in by foliage and distant hills, wades into the waves in a place where trees, apparently, grow in water that must not be the sea after all. (Figure 3, The Sea of Galilee, 2004)

We are left to confront these enigmatic photographs as stories that, in the aggregate, may tell a bigger tale, grappling with the understanding that stories and tale both will be changed every time we immerse ourselves in the images.

Dr. Mark Long is a political geographer and associate professor of political science at the College of Charleston.