Softić is a recipient of the Pollock-Krasner Grant, National Endowment for the Arts/Southern Arts Federation Visual Artist Fellowship, and Soros Foundation-Open Society Institute Exhibition Support Grant. Her work is included in numerous collections in the United States and abroad, among them the New York Public Library, Library of Congress Print Department, and New South Wales Gallery of Art in Sydney, Australia. She participated in the 12th International Print Triennial in Cracow, Poland, and won a first prize at the 5th Kochi International Triennial Exhibition of Prints, Ino-cho Paper Museum, in Kochi, Japan, in 2002. Recently, she completed print projects at Flying Horse Press, Tamarind Institute, and Anderson Ranch’s Patton Printshop. She is professor of art and chair of the department of art and art history at the University of Richmond.

Planets spinning madly around her,
a spider weaves
her web of light.
To be knocked down
in due time
by forces too large to be malicious,
or too small to destroy anything else.

Fruit hangs heavy on the branches.
Heap it up and eat it, mangia,
let it stain your best blouse.

It will not last, you know:

It will fall on the ground
in the middle of the night
with a dull thud
that could be mistaken
for a startled kick of a deer.

Waste nothing,
that’s my point:
someone somewhere is starving.

Night draws away
daybreak rushes forth
each jewel reflects all others
and thousands of things are passing by,
light
fast
swollen with impermanence. 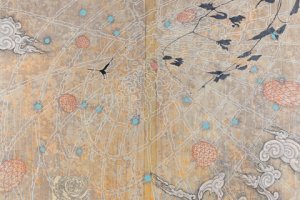 Seeing “the entire world as a foreign land” makes possible the originality of vision. Most people are principally aware of one culture, one setting, one home; exiles are aware of at least two, and this plurality of vision gives rise to an awareness of simultaneous dimensions, an awareness that—to borrow a phrase from music— is contrapuntal… For an exile, habits of life, expression or activity in the new environment inevitably occur against the memory of those things in another environment. Thus both the new and the old environments are vivid, actual, occurring together contrapuntally.
— Edward Said, On Exile

The Migrant Universe Series is a visual poem about identity and the worldview of an immigrant: exile, longing, translation, and memory. An immigrant to the United States from Bosnia, once part of Yugoslavia, I am fascinated by questions of cultural identity or cultural belonging on an intellectual level, but I experience and feel what Edward Said called “the contrapuntal reality [of an exile]” very acutely: I have transitioned through three citizenships in addition to one period of being a citizen of no country. In both my new and old countries, outdated notions of national and ethnic identity and belonging continue to shape the politics and the society.

The visual vocabulary of the Migrant Universe drawings suggests a displaced existence: fragmented memories, adaptation, revival, and transformation. Because I do not live and work within the comfort or boundaries of the culture in which I first learned to observe, interpret, and engage the world, I have the arguable privilege of having lived more than one life. My memory is my virtual self and, paradoxically, my most authentic self. Yet, memory is a process that involves erosions and accretions that occur with any reconstructive, interpretative, or artistic act. One reconnects with what has been broken, fragmented, or overlaid. Remembering becomes an act of reconstruction, where one works with what is there and tries to visualize what has been lost. Because each act of memorization necessarily involves interpretation, there can be no objective recollection.

Nor is there full erasure; like matter, memory seems to persist by transforming. The images inMigrant Universe suggest what Said called “an awareness of simultaneous dimensions.” For example, maps and star charts represent conventional interpretations of scale and distance, their fidelity assured only within accepted systems of perceiving and organizing space. I am interested in what they may become, layered upon each other in visual conversations with other elements in the drawing. In Migrant Universe, the drawings function as a rearrangeable continuum of maps, landscapes, and portraits of memory and identity.

SOUTHBOUND: PHOTOGRAPHS OF AND ABOUT THE NEW SOUTH
RECENT WORK