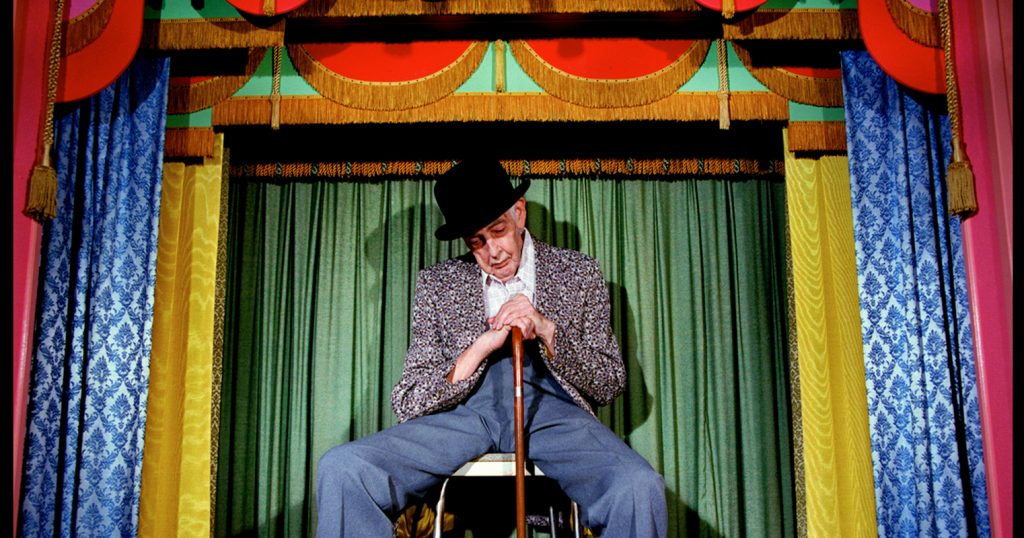 “The Projectionist” is a film and exhibition that explores one man’s lifelong fascination with an era in American culture almost forgotten: the age of the grand movie palace. This fascination culminates in Gordon Brinckl’’s magical creation – The Shalimar Theatre – lovingly constructed in the basement of his modest Delaware home. Using parts from the original theatre, The Shalimar Theatre has been reconstructed to be shared with the public along with documentary photographs and a film

Kendall Messick is an artist who constructs installations of still photography, film, video and an ever-evolving assemblage of two and three-dimensional media to capture stories that would otherwise go unheard. From the recollections of elderly townspeople in a crossroads community in rural North Carolina (Corapeake) to a man who has dedicated his life to pursuing his dream of owning a movie palace in the most unconventional way (The Projectionist), Messick is drawn to the stories of aging individuals often overlooked today. According to Messick, “Each exhibition is intended to transcend the documentary chronicling of human experience culminating in a reflection on larger themes of acceptance, intimacy, the nature of memory, and the historical significance of individuals typically passed by. In this work, I seek to reveal universal truths that surface through the personal experiences of the individual.” Having studied at the International Center of Photography and the School of Visual Arts in New York City, Messick was the still photographer for the acclaimed documentary video There is No Such Word as Can’t sponsored by the Enterprise Corporation of the Delta (1998). During the winter of 1999 he worked in Eastern Europe as the associate producer and still photographer for Here and Now a documentary film on the Gypsies of Bulgaria. Corapeake was Messick’s first documentary film as director and was completed in 2001.

After winning film festival awards, Corapeake was a featured broadcast on several PBS affiliates throughout the country. The film was then named a United States preselection finalist for INPUT 2003, which showcases the best of public television programming from around the world. The success of the Corapeake documentary led Messick to create an installation of still photography from the film in 2002. The Corapeake exhibition is currently scheduled to travel to galleries and museums through 2010. The Projectionist is Messick’s second film and exhibition, which was launched in 2007. This project has already garnered both critical and curatorial acclaim, and will be published in book form by Princeton Architectural Press in the fall of 2010. Additionally, The Projectionist exhibition is currently scheduled to travel to institutions through 2010. Messick’s current work in progress is Impermanence. This project has been inspired by a devastating fire that ravaged his home and studio in 2006. Messick’s photographs are in numerous public and private collections including the Smithsonian Institution and the Museum of Modern Art.