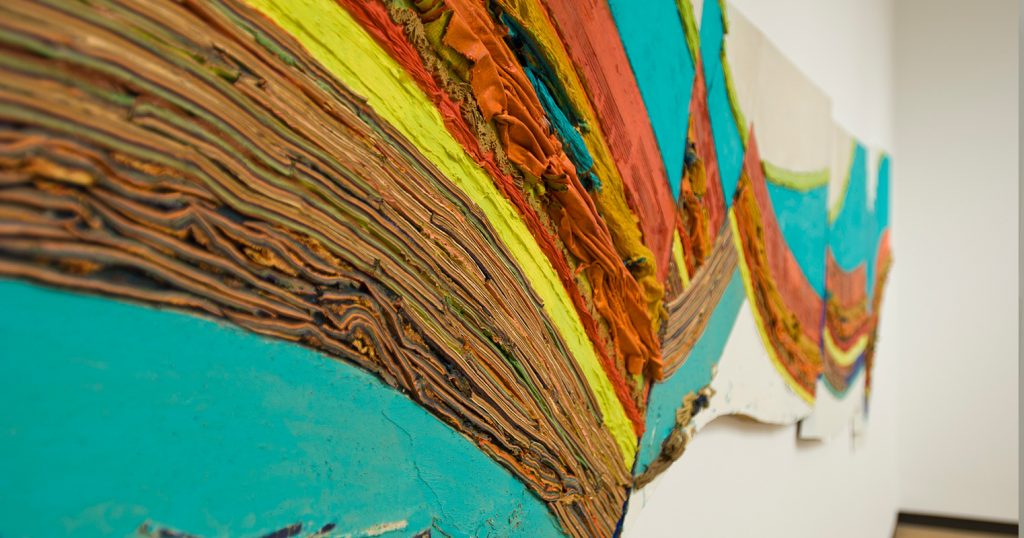 Leslie Wayne: Recent Work represents the past five years of Wayne’s vibrant, sculptural oil paintings. The works range in size from 14 feet long to as intimate as 10 x 13 inches. Wayne states that her large works are inspired by landscape and geology and are a secular contemporary and abstract response to 19th century Romantic Landscape painting. “Rather than paint pictures of landscapes, Wayne chooses to capture the corporeal essence of nature by offering an analogous experience to being in the natural world. Alluding to compression, subduction and the shifting of tectonic plates, she packs the narrative passages into the interstices of each successive layer of paint, testing the range of Richard Serra’s famous ‘Verb List’ by pulling, scraping, folding, cutting and collaging her material like clay,” states Mark Sloan, curator of this exhibition and Director/Senior Curator at the Halsey Institute.

Room 309 Simons Center for the Arts

In addition to taking cues from landscape, Wayne draws inspiration from fashion and fabric to fractals and chaos theory but rarely in anticipation of a specific work. Wayne states, “I don’t set out to make a painting about a particular subject. I am a Process painter in that respect in that I allow the phenomenology of the material to lead the way. I may begin with a set of conditions, like a shaped panel for example, but then I take my cues from the working process. I think of it as a conversation between material memory and morphogenesis—the repetition of a process that leads to an intended result and the will of the material to do what it will do.”

The smaller paintings in the exhibition are part of a series entitled “One Big Love.” Wayne began these works while simultaneously working on her larger paintings in an effort to challenge herself with new parameters within a familiar and comfortable format. The series however now includes over fifty-five paintings, each embodying a unique world of highly manipulated, striated paint.

Leslie Wayne was born in 1953 in Germany, but grew up in Southern California where she originally studied traditional oil painting and had a strong connection to the Western landscapes tradition. Her undergraduate studies began at the University of California, Santa Barbara in Painting and she finished with a BFA in Sculpture from Parsons School of Design. After her move to New York City in 1982, she abandoned observational painting and developed her signature style of intuitive painting, which is exemplified in this exhibition at the Halsey Institute.

Leslie Wayne has presented her work in numerous solo and group exhibitions including the Corcoran Gallery of Art, Washington, DC; Peace Tower/Whitney Biennial, Whitney Museum of American Art, New York, NY (both 2006); Bildmuseet, Umea, Sweden; Museum of Fine Arts, St. Petersburg, FL (both 2003); The Museum of Contemporary Art, Miami, FL (2001); Santa Monica Museum of Art, Santa Monica, CA (2000); and The Continuous Painting Wall, Birmingham Museum of Art, Birmingham, AL (1999). She was the recipient of a 2006 New York Foundation for the Arts Fellowship in Painting and a past grant recipient from both the Pollock-Krasner Foundation and the Adolph and Esther Gottlieb Foundation.