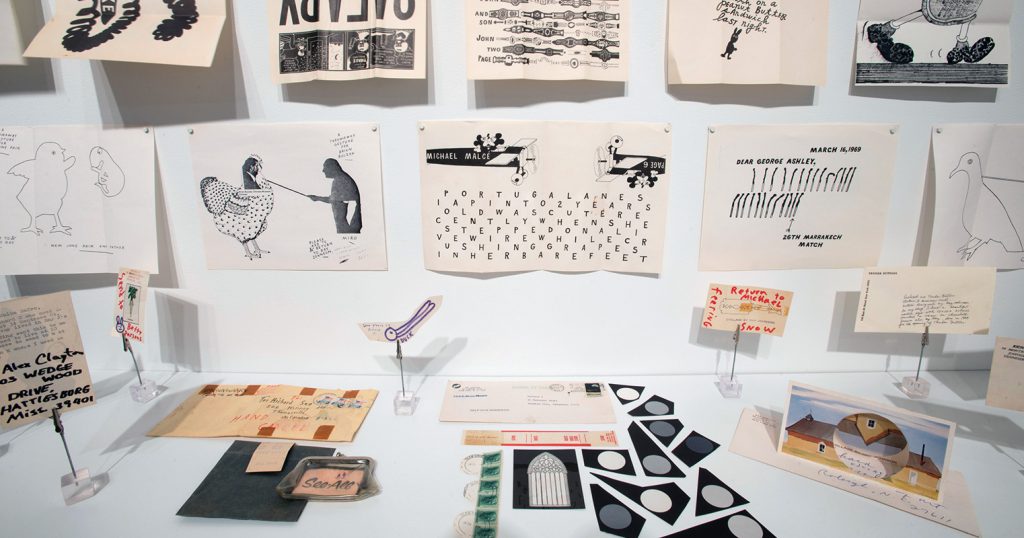 This exhibition brings together the correspondence works of three prolific mail artists:  Ray Johnson, Richard C., and Bob Ray. Conceptual artist Ray Johnson (1927–1995) was a pioneer of mail art, utilizing an ever-evolving lexicon of graphic and textual elements in his work. He corresponded with global artists, writers, and thinkers, including Richard C. and Bob Ray. A selection of vintage “mail art correspondence” between Richard C., Ray Johnson, and Bob Ray forms the historical backdrop for this exhibition. The remainder of the exhibition consists of words, objects, and images sent to curator Mark Sloan from Richard C. and Bob Ray in the past year including a number of collaborative works between these two artists.

In 1900, British collector W. Reginald Bray (1879–1939) became the first human to be sent through the mail. Bray thoroughly read the British Postal Code Manual and tried his best to stump the post office by mailing shoes, hats, vegetables, a penny, seaweed, and an Irish Terrier, among other objects. In retrospect, these bafflements were among the first-known examples of what we now call “correspondence art.”

From 1918 until his death in 1949, cartoonist Robert Ripley (of Believe It or Not! fame) received more mail than any other individual in history—more than a million letters a year during the thirties and forties. Ripleymania swept the country at that time and many letters were sent with obscure addresses, including those addressed in Braille, wigwag, Morse code, semaphore, and in backward, upside down English.

While Ripley’s odd mailbag was a pop culture phenomenon, artists from around the world were starting to awaken to the possibilities of sending art through the mail. Correspondence art might be defined as an aesthetic or conceptual transaction exchanged through the postal service. It is not an art movement per se, but it can be said to be a genre. In looking for its art-historical antecedents, we need look no further than artist Marcel Duchamp and his use of what he called readymades (found or existing objects that he elevated to the status of art by proclamation). This “anti-art” approach became popularized as Dada, which disrupted the comfortable assumptions about what art might be and how it may be circulated and interpreted.

Fluxus, formed and named by George Maciunas, in 1961, was an offshoot of Dada. It became an international art movement, incorporating visual art, performance, literature, dance, and design, continuing in the sensibility of Dada by concentrating more on the creative process itself than the finished “product.” Some of the most notable practitioners involved in the Fluxus movement, along with Maciunas, include John Cage, Yoko Ono, Joseph Beuys, Nam June Paik, Davi Det Hompson, and Dick Higgins.

Around the globe, artists of the ‘50s and ‘60s were engaged in a radical reconsideration of how art was produced, presented, transmitted, and received. Book art, installations, collaborations, interventions, performances, readings, and technology were all elements that were swirled together in differing portions to create a new kind of art, and a new way of apprehending the world.

All of this forms the backdrop for this exhibition. Ray Johnson (1927–95) is often cited as among the first to activate the unusual practice of mail art in the mainstream art world. Johnson founded The New York Correspondence School, a network of mail artists. He was a student of Joseph Albers (and others) at Black Mountain College in the 1950s, and later became a fixture in the New York art world, from the late 1950s until his self-exile on Long Island in the 1980s. Although Johnson did not proclaim a formal alliance with Fluxus, the Fluxus artists were among the first to recognize the potential of using the postal service as an economical method of communicating ideas on a global scale.

Richard C. and Ray Johnson had a voluminous correspondence over the years, beginning in the late 1960s and terminating with Johnson’s suicide, in 1995. C. organized a major exhibition of Johnson’s correspondence art for the North Carolina Museum of Art, in Raleigh, in 1976 (involving more than eighty contributors), called Correspondence: An Exhibition of the Letters of Ray Johnson. This exhibition sought to take measure of Johnson’s voluminous output, and to draw attention to his unorthodox methodology.

Bob Ray had a brief correspondence with Ray Johnson during the early 1990s, and has had an ongoing exchange with Richard C. since those very same days. This exhibition features a combination of works: some historical works from Ray Johnson to Richard C., some from Richard C. and Bob Ray to me, and some collaborative works, altered by both Richard C. and Bob Ray to me. The range of materials sent to me here at the Halsey Institute of Contemporary Art is, in itself, a testament to the variety and diversity of the genre of correspondence art.

The main goal of this exhibition is to establish a baseline introduction to the genre of correspondence art. The three artists selected represent a continuum though I hesitate to call this a lineage because that implies logic and a traceable evolution. It is safe to say that through their quiet, yet persistent involvement in this little-known practice they have produced works that offer insight into the creative process itself. There is an aspect of this project that is like the children’s game of leapfrog. Each artist responds to another’s work in a call-and-response manner, with no beginning or end. There is a powerful current of Dada and Fluxus blowing through this series of works, and the spirit of Ray Johnson hovers above it all.

The curator wishes to thank the following people for their contributions to the exhibition: Bob Ray, Richard C., Huston Paschal, Barbara Hardy, Ann Ehringhaus, Colin Johnson, Riki Matsuda, and the staff of the Halsey Institute of Contemporary Art.

Free and open to the public. Halsey Institute Director and Chief Curator Mark Sloan will lead a walk-through of the exhibition with the artists.

Bob Ray will work with six area K–12 schools to introduce students to the concept of correspondence art. Ray will also spend time in the Halsey Institute gallery working with visitors to create their own mail art. Contact the Institute at 843.953.4422 for details.

Free and open to the public. Ray will be in the shop to lead participants in creating their own correspondence art.

The Correspondence Art exhibition is funded in part by the South Carolina Arts Commission, which receives support from the National Endowment for the Arts. 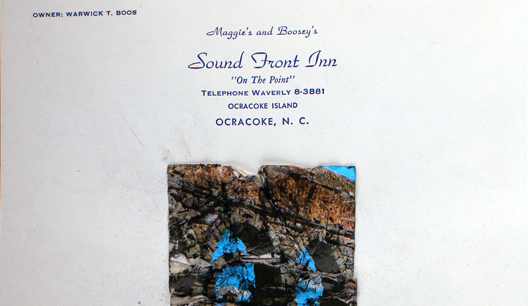 Ray Johnson was born in Detroit, MI in 1927 and was an influential figure in early Pop art and the development of correspondence art as a form. While in High School Johnson took classes at the Detroit Art Institute and spent one summer in a drawing program at Ox-Bow School in Saugatuck, Michigan. Johnson spent three years at Black Mountain College in North Carolina from 1945-48 studying under Joseph Albers and gaining exposure to the work of John Cage, Merce Cunningham, Willem de Kooning and other important figures during these seminal years for the progressive art college. In the 1950s Johnson was involved in the New York art scene, experimenting with early Pop, Happenings and Performance. Johnson also produced small collages that incorporated references to popular culture that he termed “moticos.” His experiments with sending art through the mail eventually led to the first meeting in 1968 of the New York Correspondence School. Johnson had his first one-man show in New York at the Willard Gallery in 1965 and in Grace Glueck’s review of the exhibition in the New York Times she dubbed him “New York’s most famous unknown artist.” In the late 1960s Johnson left New York City for Long Island and began living in an increasing reclusive way, maintaining connections through his mail art activities. He died in 1995 in Sag Harbor Long Island of an apparent suicide. He is the subject of the 2002 film biography How to Draw a Bunny, directed by John Walter. Ray Johnson’s works in this exhibition are all things he mailed to Richard C..

ABOUT RICHARD C.
Richard C. (a.k.a. Richard Craven or Richard Canard) is an artist and curator currently based in Carbondale, Illinois. He grew up in North Carolina and attended Western Carolina University in Cullowhee, NC as an undergraduate in the 1960s. The artist attended East Tennessee State University in Johnson City, TN for graduate school and for a time served as Associate Curator at the Southeastern Center for Contemporary Art in Winston-Salem, NC. Richard C. became interested in Ray Johnson’s mail art in 1965 after seeing an article in the New York Times about his work and began a correspondence with Johnson. C. later organized an exhibition of Johnson’s work in 1976 for the NC Museum of Art in Raleigh titled “Correspondence: An Exhibition of the Letters of Ray Johnson.” The artist continues to actively participate in the practice of correspondence art, sending work to artists and enthusiasts around the world through the mail. All of Richard C.’s works in this exhibition were mailed to curator Mark Sloan here at the Halsey Institute.

ABOUT BOB RAY
Bob Ray, born just east of Kansas City, Missouri, works in a variety of media, from drawings, paintings, collage, and sculpture to correspondence and performance works. His aesthetic borrows heavily from the Dada and Fluxus movements, with a strong combination of word, gesture, and image. Since 1990, he has been very active in international correspondence art activities and projects in Great Britain, Germany, Italy, Egypt, Japan, United States, Bolivia, Spain, Hungary, Switzerland, and Latvia. He has had extended exchanges with some of the most significant correspondence artists in the world, including Ray Johnson, Richard C., Giorgio Cavalinni, and Torma Cauli. He is a 2015 recipient of the North Carolina Arts Fellowship. He currently lives on the island of Ocracoke off the coast of North Carolina. All works in this exhibition arrived by mail addressed to Mark Sloan.

Educators at the Halsey Institute
PROPHECIES