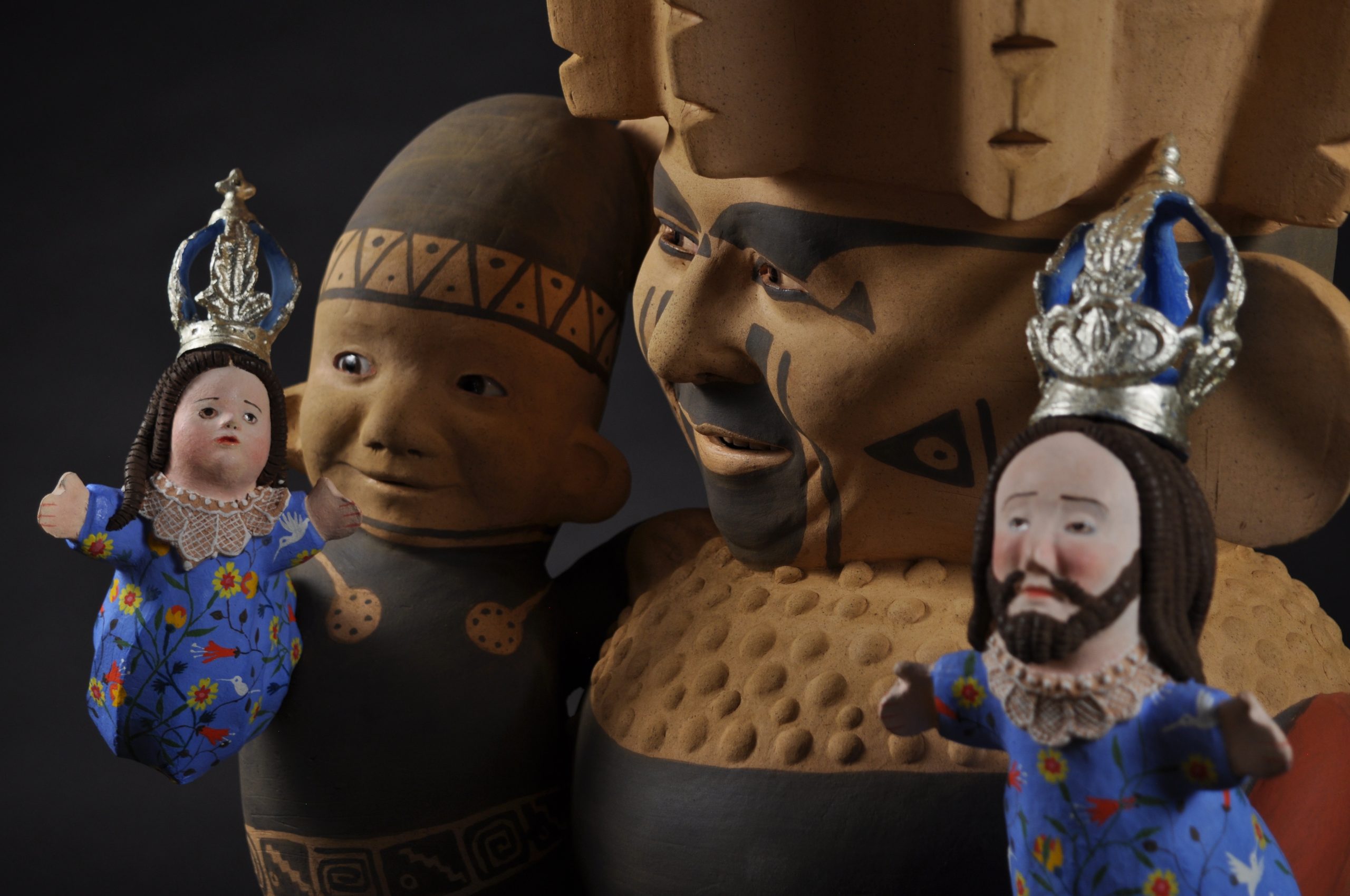 The Halsey Institute debuted Peruvian American artist Kukuli Velarde’s CORPUS project in its entirety for the first time. CORPUS is comprised of ceramic and fabric works that encourage reflection on the meaning of survival in the face of colonialism. Fifteen ceramic sculptures, each with matching tapestries, are presented in a symbolic representation of the annual Corpus Christi festival in Cusco, Perú. The sculptures reference indigenous pre-Columbian forms and iconographies in a visual representation of syncretic aesthetic, cultural, and religious traditions.

CORPUS engages with and confronts Perú’s Spanish colonial past, asserting that pre-Columbian sacred entities and the worldview they inhabit were not vanquished by Spanish conquerors, but instead cleverly blended with their Catholic counterparts, ensuring their survival. So too, have the diverse peoples of Perú and greater Latin America formed and reformed political, religious, and cultural identity in the shadow of centuries-long oppression. Velarde’s CORPUS asks viewers to consider this resilience via her stunningly detailed and humorously thought-provoking work. 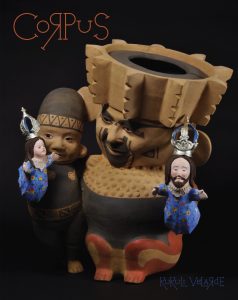 This exhibition is accompanied by a publication, Kukuli Velarde: CORPUS. The hardcover book features detailed photographs of the CORPUS sculptures, along with an introduction by Tey Marianna Nunn, essays by Katie Hirsch and the artist’s mother, Alfonsina Barrionuevo, and an interview with the artist. 169 pages. $24.95

Learn more and order a copy on our online shop.

All events are free and open to the public unless otherwise noted.

Open to all membership levels.

Staff-led tours of the exhibition take place at 2:00 PM each Saturday unless superseded by a program.

PINTURAS DE CASTA AND THE CONSTRUCTION OF AMERICAN IDENTITY 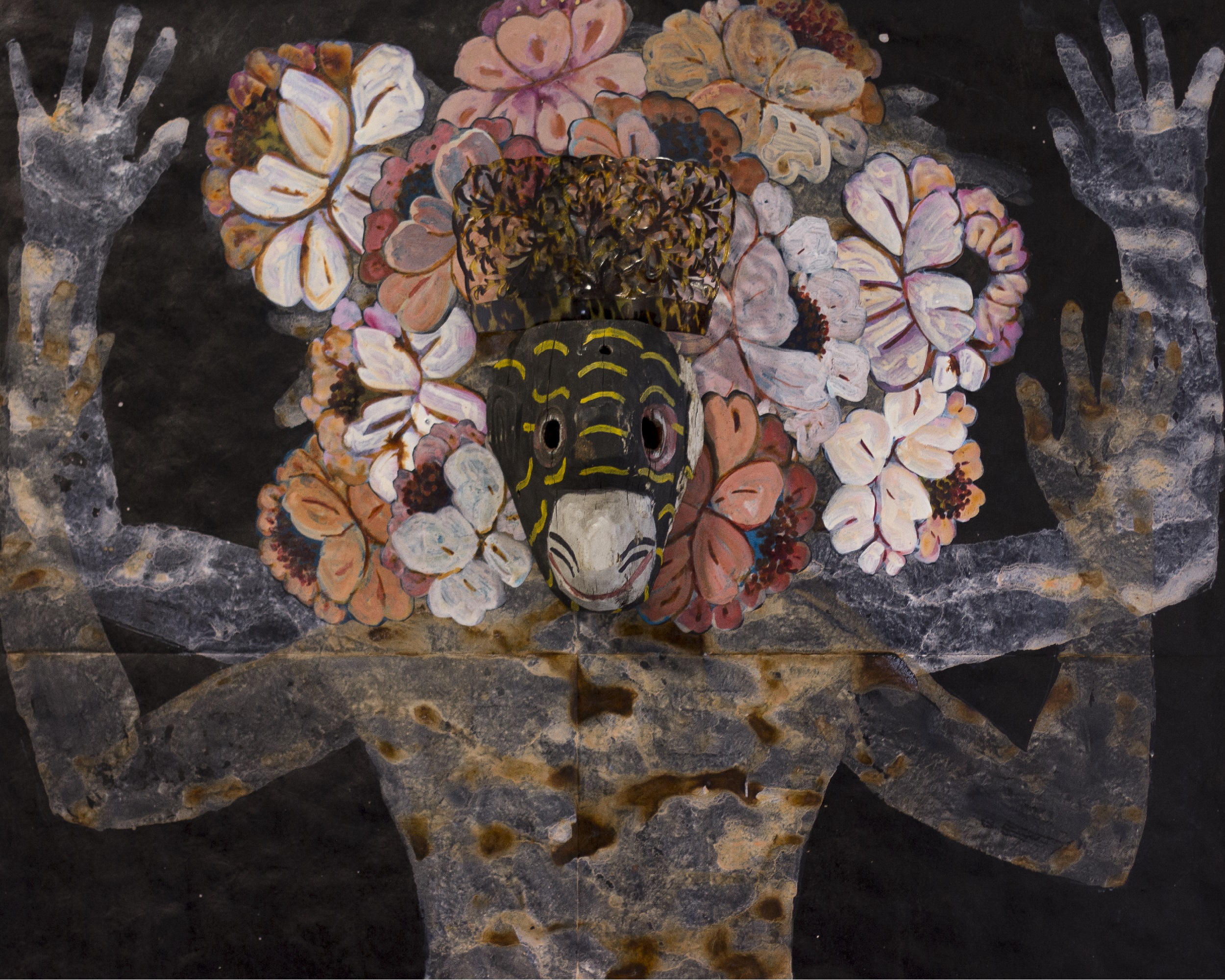 Kukuli Velarde is a Peruvian American artist based in Philadelphia, PA. Velarde is a multi-talented artist, working in ceramic, painting, drawing, and installation. Much of her work draws on pre-Columbian traditional forms and iconographies, highlighting colonized and syncretic identities and aesthetic systems. Velarde received a BFA from Hunter College in New York City. She is the recipient of such awards as the John Simon Guggenheim Fellowship (2015), Pollock-Krasner Foundation grant (2012), and Joan Mitchell Foundation grant (1997). Her work can be found in the collections of Museo de Arte Contemporáneo de Lima, Perú; Museum of Fine Arts, Houston; and the Pennsylvania Academy of the Fine Arts, among many others.

A Moche-inspired figure chuckles beneath the face of San Sebastián. A figure astride a Tiwanaku-style vessel peers from behind a mask of Patrón Santiago. These intricate figures, rendered in clay and decorated in vibrant underglazes, paints, and gold leaf, deliver a powerful message beneath their playful humor. The fifteen figures in Kukuli Velarde’s CORPUS are indigenous entities who have survived for centuries beneath the guise of Spanish Catholic saints and virgins. More specifically, these saints and virgins are those represented in the annual celebration of Corpus Christi in Velarde’s hometown of Cusco, Perú.

Kukuli Velarde’s interpretation of the effigies paraded in the streets during Corpus Christi is a multifaceted exploration of the construction and expression of mestizo identity in Perú. Just as the sacred beings in CORPUS ensured their survival by cleverly blending with their Spanish counterparts, so too have the diverse peoples of Perú formed and reformed political, religious, and cultural identity in the shadow of centuries-long oppression. Ritual is a logical place to look for cultural identity, as the act has long served as a vehicle for communication. The Spanish celebration of Corpus Christi was celebrated in Cusco, Perú from at least 1572, the closing year of a forty-year long campaign for conquest. In that year, Viceroy Francisco Toledo referred to Corpus Christi as Cusco’s most important religious festival. Like so many other ritualized public processions, Corpus Christi uses a visual language derived from the Roman Imperial triumph, a celebratory militaristic event. In this instance, Christ and his attendant saints are the lauded victors. These public displays of devotion were considered essential to the successful Christianization of indigenous groups. Cusco, the former capital and spiritual center of the Inka empire, was the perfect staging ground for conversion.

Colonialism ultimately has no interest in syncretism or hybridity, although it may use these concepts to its benefit. Colonialism seeks to demolish in order to replace and has no true end date. Long after borders are rewritten and new ruling systems established, the consequences of the methodical destruction of memory and identity remains. It is within this context that Velarde calls upon the viewer to question issues of survival and inheritance within the long continuum of the history of Perú. In particular, Velarde challenges the acceptance of a belief in a universal aesthetic of beauty, which she posits is ultimately Western. By mimicking form and iconography of indigenous Pre-Columbian ceramics in CORPUS, Velarde seeks to reclaim the aesthetics in place prior to the arrival of the Spanish.

Even as Pre-Columbian objects are admired in the halls of the world’s museums, there remains a continued ignorance on the very existence of contemporary indigenous groups and cultures. An inverse of this issue is the persistent Othering of indigenous cultures around the world, not just those located in Velarde’s Perú. With constantly increasing tourism in Central and South America, indigenous identity is caught between the push for modernization and the demand for “authentic” ethnicity. Peruvian Inka culture has been a central point of economic activity due to this increasing ethno-tourism. Visitors to Perú jostle for pictures alongside llamas at Machu Picchu and purchase traditional textiles from the markets of Cusco. Tourists line the streets of Cusco each June for a glimpse of the real Perú during Corpus Christi. Indeed, Corpus Christi is the real Perú, but is poised at a unique intersection of past and present, center and periphery, and sacred and public. Peruvian identity is engaged both genuinely and self-consciously in this moment, where economic successes can be had through the performance of self. In Kukuli Velarde: CORPUS, Velarde explores this objectification of self via an installation that seeks to make viewers feel on display just as the ceramic sculptures/effigies in Corpus Christi/ indigenous peoples of Perú are on display. Flashing light and the sound of camera shutters provoke feelings of exposure and invasion in the viewer. In this way, Velarde not only draws attention to the casual tourism of Otherness present in Perú but collapses time and space to also raise fascinating questions about the inner life of objects and the nature of our interactions with them.

The fifteen members of CORPUS wind through the galleries atop individual red tables, mimicking the procession and resting of effigies in Corpus Christi. The red tables reference large structures carried by Cusco youths that are provided to the effigies to rest on when not in motion. To accompany the sculptures, Velarde commissioned banners created by the same Peruvian artisans who create the traditional processional banners used in Corpus processions. The presence of these banners historicizes Velarde’s fifteen saints and virgins, who would never be considered appropriate participants in the Catholic church’s performance. Importantly, the banners name the indigenous culture that inspired each sculpture. Moche, Tiwanaku, Nazca, Cupisnique, Recuay, Wari, Inka, Chimú, Chancay, Caral–CORPUS is a love letter to these former empires and cultural centers that built the foundation of present-day Perú.

Velarde is not the first to infer that Peruvian Catholic effigies are not what they seem. Syncretic imagery of the Virgin Mary coexisting with Pachamama and other Inka female sacred entities is well documented in Spanish Colonial Cusco. Velarde’s CORPUS is alive, and clever. The sacred beings and the worldview they inhabit only pretended to be vanquished by conquistadors and priests. They made a conscious decision to hide behind the velvet robes of their oppressors to ensure their survival and are only now peeking out to laugh at the colonizers’ expense. Velarde’s decision to mimic the form, color palette, and iconography of Pre-Columbian ceramic vessels asserts that this aesthetic is one that contemporary Peruvians should reclaim as their revered heritage.

As Velarde has done in previous work, such as her series Plunder Me Baby and Isichapuitu, many of the sculptures in CORPUS could easily be mistaken for their Pre-Columbian counterparts upon quick glance. In CORPUS, San Pedro, dangles his heavenly keys from atop litter on a work inspired by a Wari style vessel dating from the 6-10th century. The Wari empire, situated in present-day Perú, produced an often-realistic style of ceramic imagery that featured depictions of the natural and supernatural worlds. Velarde’s reverence for the craftsmanship and aesthetics of the Wari vessel are obvious in the works’ similarities.

Assembled in this exhibition in its complete iteration for the first time, CORPUS reclaims the indigenous aesthetics of Velarde’s home country of Perú. No longer dismissed or fetishized, the Pre-Columbian entities and the worldviews they occupy are liberated to exist freely among us. They flaunt their power, caress their children, smile at our good intentions. They exist for themselves, for the forgotten artists who created the forms that they originally inhabited, and for the people of Perú who have long been told to accept and adhere to Western forms of beauty. Kukuli Velarde: CORPUS puts the act of looking on display, asking the viewer to consider the wider contexts in which their looking takes place.