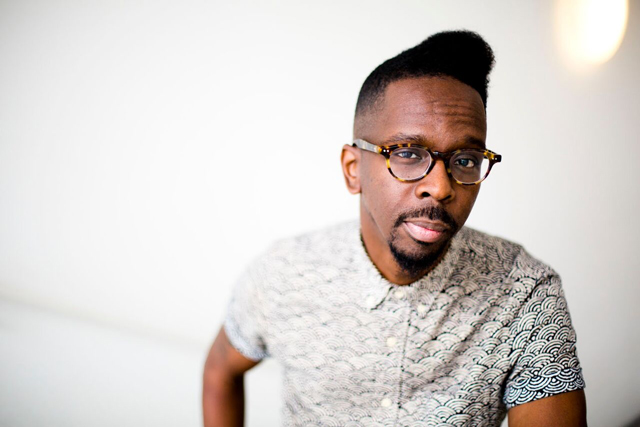 On September 9, Fahamu Pecou hosted an installment of interSessions™ his series of curated conversations between figures from the arts and the hip-hop community. This session featured Michael Render, better known by his stage name Killer Mike, an American hip-hop recording artist and activist, and Dr. Arturo Lindsay, an artist and scholar who conducts ethnographic research on African spiritual and aesthetic retentions in contemporary American cultures.

According to Pecou, “The goal of interSessions™ is to provide a platform that reveals the often unconsidered intersections between the fine arts and hip-hop culture. These conversations privilege access and community engagement and encourage meaningful dialogue between often disparate communities.”

Michael Render (born April 20, 1975), better known by his stage name Killer Mike, is an American hip hop recording artist, actor and activist from Atlanta, Georgia. He is the founder of Grind Time Official Records, which he launched through the SMC and Fontana Distribution. Mike made his debut on “Snappin’ and Trappin'”, from OutKast’s 2000 LP Stankonia, and later appeared on the Grammy-winning song “The Whole World”, a single from OutKast’s greatest hits album Big Boi and Dre Present…OutKast. He has since released five full-length albums as a solo artist. In December 2008, Mike confirmed he signed to fellow Atlanta-based rapper T.I.’s Grand Hustle Records. In 2012, he released R.A.P. Music, produced entirely by American rapper-producer El-P. In 2013, the two subsequently formed a duo, branding themselves Run the Jewels. The two signed to Fool’s Gold Records and released their self-titled debut in June of that year.

Killer Mike is also known as a social and political activist, focusing on subjects including social equality, police brutality, and systemic racism. In addition to addressing themes of racism and police brutality in his music, he has also delivered several lectures at college universities, written about social justice topics for publications such as Billboard, and been the subject of televised and published interviews regarding police misconduct and race relations. He is a visible and vocal supporter of Bernie Sanders during his 2016 U.S. presidential campaign.

Dr. Arturo Lindsay is an artist-scholar who conducts ethnographic research on African spiritual and aesthetic retentions in contemporary American cultures. His research findings are manifested in works of art, scholarly lectures and articles. A native of Colon, a seaport city on the Caribbean coast of the Republic of Panama, Lindsay migrated with his parents to New York City at age 12 and settled in Brooklyn. Lindsay’s work is represented in important private and public collections nationwide and abroad. As a scholar, Lindsay has lectured and published several essays on “New” World African aesthetic retentions. He is the editor of Santeria Aesthetics in Contemporary Latin American Art published by the Smithsonian Institution Press.

Dr. Lindsay is Professor Emeritus and former chair of the Department of Art and Art History at Spelman College. He received his Doctor of Arts (D.A.) degree from New York University and holds a Master of Fine Arts (MFA) degree in Painting from the University of Massachusetts, Amherst. He was the 2006 Distinguished Batza Family Chair at Colgate University; the 2005 Kemp Distinguished Visiting Professor at Davidson College in Davidson, NC; and the 1999 Fulbright Senior Scholar at the University of Panama. In 2012 Lindsay was selected by the Department of State and the Bronx Museum of the Arts to represent the United States in Cairo, Egypt as part of smARTpower.