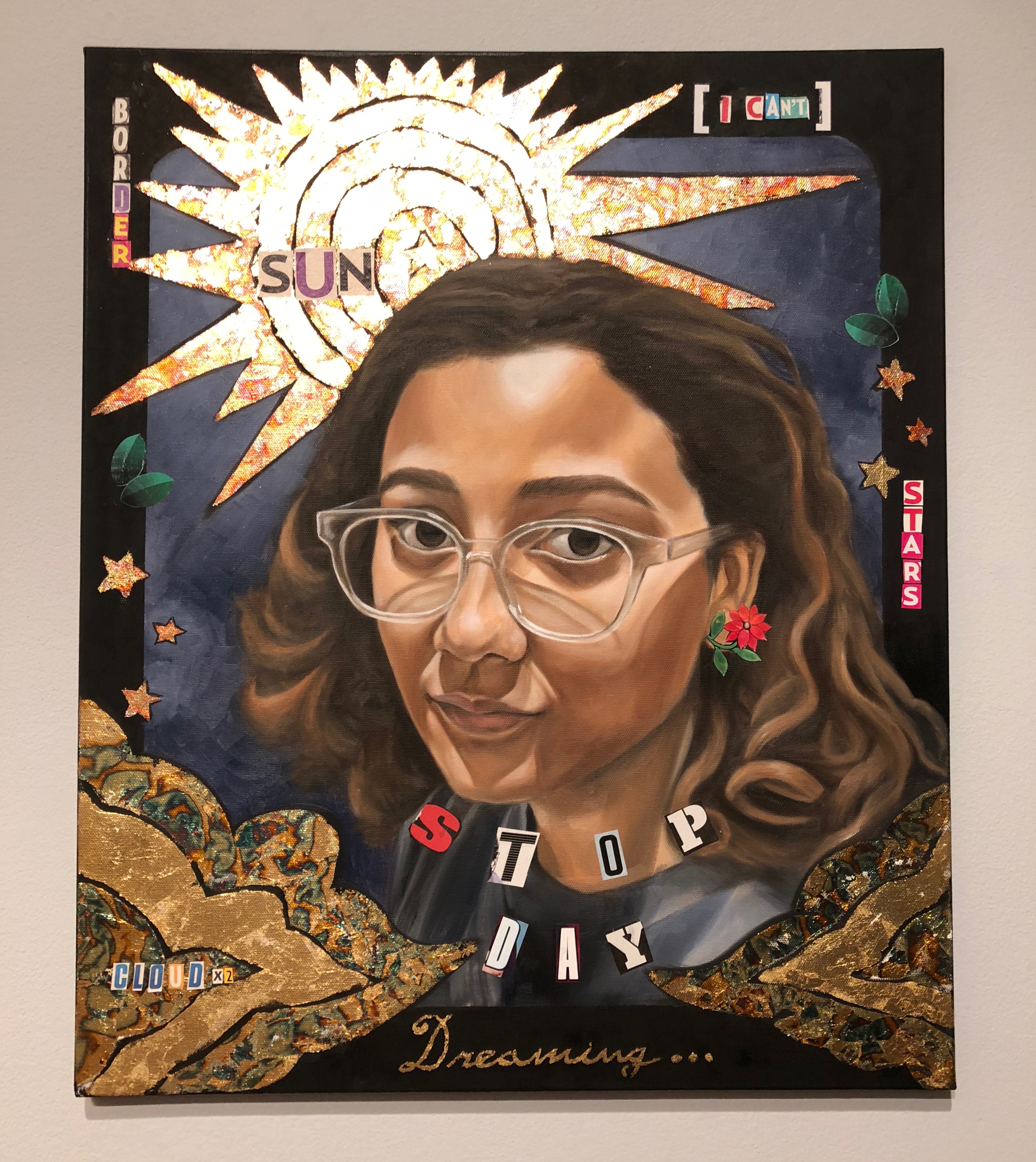 Timothy Hunter is a freshman from Myrtle Beach, SC double majoring in Chemistry and Studio Art. His two paintings Eyes of Yemi and (I Can’t) Stop Daydreaming were selected by artist Amy Yoes to be part of the Young Contemporaries exhibition for 2018. I interviewed Timothy to learn more about his work, inspirations, and future projects.

The transcript of this interview has been edited for length.

How did you get into painting or gain interest in Studio Art in general?

I’ve always been drawing and then 2 years ago a got an oil paint set for Christmas from my aunt, so I just tried them out and I had fun with it.

What is your inspiration behind the two pieces that you have in the Young Contemporaries exhibition?

Ok, so the first one, Eyes of Yemi, that was done like months before the second one. They aren’t really related at all, they’re just CofC students who I thought pretty beautiful. In Eyes of Yemi, I try to go for the old Renaissance realism type thing, so you don’t really see African Americans represented in that as much. The Greek eyes are an homage to the old style, I wanted to show that and those two styles or same styles I guess? The eyes are from the statue of David and I kinda just put them on the top. I’m very into this thing I call “contrasticism”, it’s just made up. Its two different styles coming together. Like silk over concrete would look just really cool if you can imagine that. Anyway, I’m trying to do that with my pieces now. 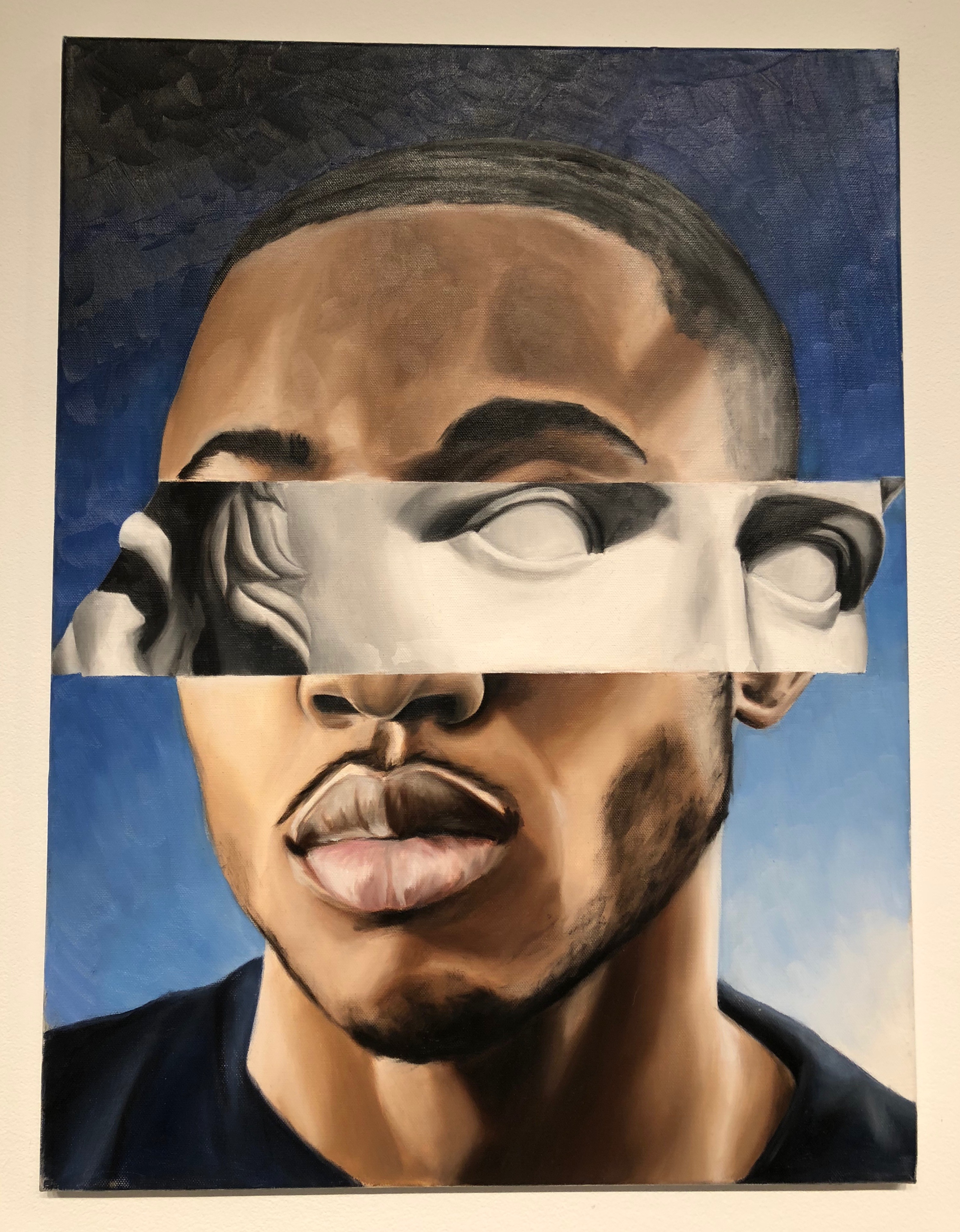 Timothy Hunter, The Eyes of Yemi

And then in your other piece (I Can’t) Stop Daydreaming, I feel like you started incorporating a little bit of that collaging that you were talking about, right? So, what’s the story behind that piece?

That piece, I just… um… really had a crush on that girl. When I first met her or really first talked to her was in a museum. I was talking to her and kinda like dreaming, having all these thoughts you know? Whenever you meet someone and you start thinking oh I want to date this girl or something like that or date this guy or whatever, so I painted that because I obviously couldn’t date her. Which meant I had to stop daydreaming about this stuff.

Do all your portraitures feature people of color?

They pretty much only feature different ethnicities other than white. That’s just ’cause I think they look cooler. I’m half-white, so I’m not bashing a certain type of person. I just like painting darker skin tones and different facial features than normal portraiture. Mainly because of the colors that are in their skins.

Do you primarily do portraiture? Or have you ever branched out?

I’m starting to do other stuff. When I first started painting portraiture… everyone was telling me that was the hardest. Obviously, I wanted to do that because it was the hardest one. And then I just kinda stuck with that. I can do other things like paint landscapes. Right now, I want to do full body portraits, but I don’t want them to be small. So, I have to save money for bigger canvases. I took Sculpture I last semester though. That was pretty fun. I think sculpture is probably the hardest form of art. If you can do it right that’s really respectable for me. Eventually, I want to get to the point where I can make busts, but that costs a lot of money and you need a lot of space. With painting, I can just paint in my dorm.

How you pick your subjects?

Normally when I can choose someone to paint it’ll just be like how beautiful they look. I think they deserve to be in portrait because paintings I feel like will last a little bit longer than the person. I think this person deserves to be seen in a couple of generations. With the Yemi one, I kinda covered his eyes up, so I should paint him again with his whole face. I remember putting away that piece for a long time because it wasn’t coming together properly and then coming back a couple months later and finishing and I was really proud.

Do you have any specific artists that you look up to? Or that draw inspiration from?

I have so many art books. That’s another hobby, probably just collecting art books. I tab all my favorite pages. I collect Kehinde Wiley, he’s pretty well known now because of the Barack Obama portrait. He’s amazing. I emailed him big fanboying. I love Kehinde Wiley. There’s a whole story to that. I love him, he’s so cool. And then William-Adolphe Bouguereau. They call him the last master of glazing. He’s from the early 1900s, I just have five of his books because all his pieces are so beautiful and I just want to get to that level one day. Then a couple of graffiti artists like novernyc, and daim. If you look them up you’ll see that I take a lot from them into my pieces.

What’s your favorite thing to doodle? Or do you even doodle?

I doodle a lot. I have tons of doodles. I have different characters that I’ll add. Sometimes I even fill up entire pages. Floating letters are a common thing that I draw. Faces also up a lot… But when I sketch a person, I want to do them justice. I don’t want to make them look bad in the drawing. I like to sit down and properly draw a person. So, when I’m doodling, all the people are made up. I think doodling is such a big thing. I feel like if you doodle a lot you could get way better at drawing and art in general. It’s like … what do you call that when you throw shit at the wall and something will stick?

Last question, what are you working on right now? If anything?

Well, the big thing is… do you know Artfields? The competition in Lake City? Because I’m in that! People I even made business cards and all that! The number for voting is 723437. That’s voting for People’s Choice. If anyone sees me there come talk to me because I love talking to people about art in general.

Make sure to follow Timothy Hunter on Instagram @timmy_hr and go to Artfields-South Carolina Art Festival in Lake City, SC from April 20-28.