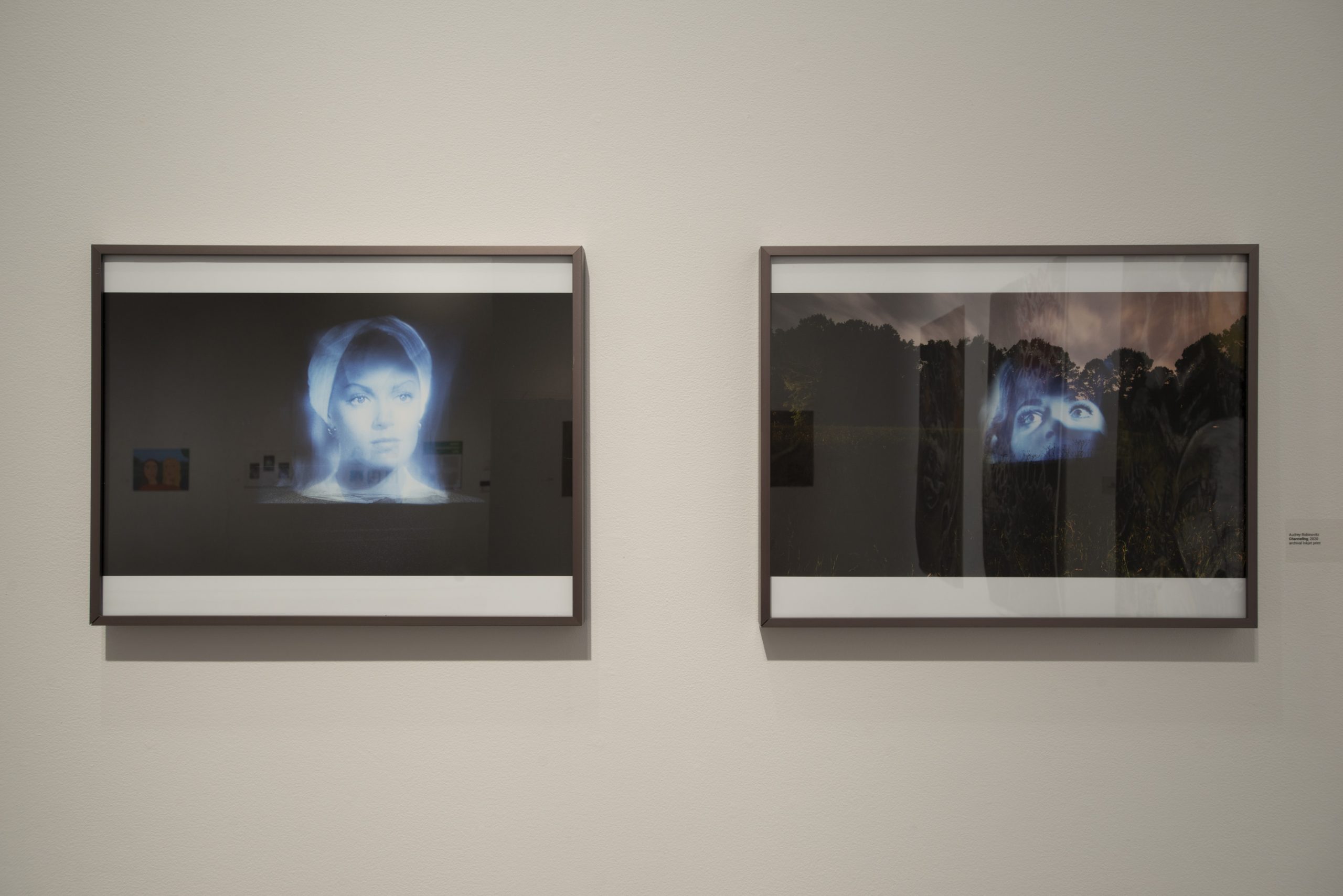 IP: Something that drew me to your work in Young Contemporaries was your use of found material. In these works, you take found material and build it into a kind of language—one that is borrowed, but also distinctly your own, and unique to your work. How would you describe the experience of working with found material? How can the self be reflected through others’ images?

AR: Working with found footage is something I sort of accidentally pushed myself into around a year and a half ago. It’s funny, because I spent a lot of my life in the darkroom, doing silver gelatin prints and B/W photography, and I think a lot of what I was trying to capture back then was the feel of a film still. Beyond postconceptual photographers like Cindy Sherman, I think there’s something really compelling about a still image that functions in its own right, but also is allowed to gesture towards an implied moving image. Eventually, the pandemic coinciding with growing frustration with portrait photography made me ask myself: what if I just took real people out of the equation entirely? I sometimes feel bad for my models, because I came to shoots with exact images of what I wanted them to look like, and those images were often taken from film. It kind of just became easier and more productive in its own right to use those images directly. But like you said, I think there’s a curational impulse there which is very contemporary. I definitely think the act of choosing is creative. Even if you take all of the editing and arrangement out of a found footage work, I think the images you choose to work with are extremely telling.

IP: Now that we’ve talked about the self, I’m also interested in the role of the viewer. Your works in Young Contemporaries explore the ways in which the female body is portrayed, evoking concerns about the gaze: who is allowed to gaze at whom in a work of art? One result is that we, as the viewers, feel engaged—and perhaps implicated—in what we’re seeing. How does the concept of gazing influence your work?

AR: Definitely! I think I was really focused on that idea in and of itself when I was making my earlier photographic work, and I definitely still am indebted to second wave theorists, Mulvey especially. I would say that now, however, I try to move beyond the notion of the unilateral gaze into a more postmodern way of considering both audience and performance. Is the act of looking itself transformative? Can women wield patriarchal gaze onto themselves? How are these dynamics complicated when what we see is not a real woman, but a marketed image of a woman? In today’s identity-focused fourth wave feminist climate, is it sufficient to regulate voyerusim to the realm of patriarchal power alone? In ‘Slow Death’ in particular, I think I wanted to disrupt the traditional assumption that male spectatorship is unilaterally violent, because implicit in that assumption is the tacit admission of women’s victimhood. I think sometimes it’s a lot more complicated and often more dangerous than that. How does voyeurism destroy men? Or maybe for the psychoanalysts, how does voyeurism give them an outlet to destroy themselves at the consequence of everyone else’s autonomy? 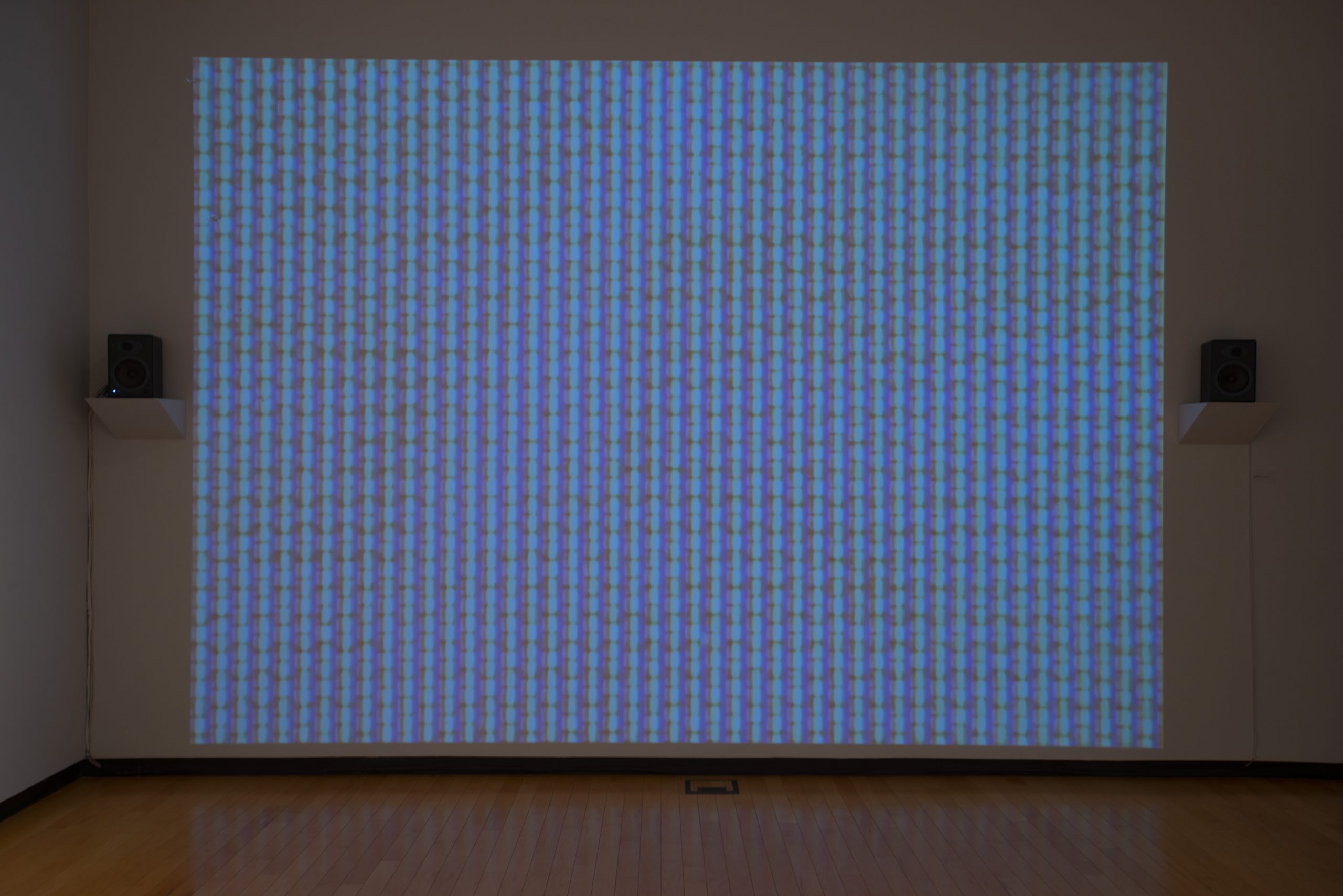 Audrey Robinovitz, nothing hurts and you won’t be [installation view], 2020. Single-channel video.

IP: I’m struck by the way the image-based works from your Channeling series feel as if they’re on the cusp of movement: as if the solitary faces are about to change or disappear. How are working with image and video different? Similar? How can the boundaries between still and moving images blur?

AR: This is such a powerful question, and honestly, one I’m not even sure I can answer yet. I would maybe say at this point in my life that I’m only attracted to moving images which are themselves half still, and still images which are themselves half moving. I’m not sure why that is, but especially as I focus more on digital culture and the way technology has enabled new modes of communication, I think the boundaries between those two forms of representation are, totally like you said, very blurred and often called into question. I’m thinking of a trick people like to play on social media platforms like twitter or instagram where they post a screenshot of a video, but keep the small UI graphics that indicate that if you were to tap it, it would play like a video. I get fooled by those things all the time, and I feel like while facetious, that says a lot about the degree to which our experiences of images and video blur online.

IP: What are you working on outside of your works in Young Contemporaries?

AR: For most of this semester I was working on my thesis exhibition, but now that it’s up as of this week, I’m continuing work on my Bachelor’s Essay for my English major. I’m writing on the unstable identities of women in meta-cinema, which definitely has a lot of clear crossover into my studio practice. This isn’t part of a college-sanctioned project, but I’ve also been spending a lot of time working on DJ sets, in case safely populated parties of vaccinated friends can come back anytime soon. 🙂

IP: Could you give us five recommendations that will help us understand your work and/or your artistic process? They can be from any category: artistic influences, songs, philosophers, places, TV shows, social media platforms, etc.

AR: This is maybe my favorite kind of question ever. I am so deeply someone who loves to hear about people’s favorite things. If I can find any sort of interview from an artist, writer, or musician I admire where they recommend anything, I feel like I’ve just come upon hidden treasure. For that reason, sorry in advance if I end up being too detailed here. I think chronologically, one of my first loves was the work of the literary modernists: Woolf and Yeats in particular. I’ve written a lot of scholarly research on them, but also I would absolutely say their focus on consciousness and the limits of the individual mind have seeped into how I think about art. Process-wise, I think two amazing Korean-American artists: Nam June Paik, and Theresa Hak Kyung Cha, have been my biggest inspirations. Obviously Paik’s influence on video is genre-defining, but even more than that, the degree to which these extremely different creatives use their medium to investigate and critique, but also to celebrate and more honestly portray mediums of communication has been something I return to a lot. Be it televisions or the English language, I think it’s important to be able to know how things function, and then use that knowledge to understand their history and potential. Lastly, in terms of more distanced media from the art world, I would say: TV – Neon Genesis Evangelion absolutely (the entirety of ‘nothing hurts’ was made from footage from that anime), music – vocaloid and electronic voice manipulation, philosophers – Baudrillard, Lacan, and Deleuze, and places/social media platforms, which is actually one answer for me – the anonymous image board. Thanks so much for these amazing questions, I had a lot of fun answering them!