Slavery’s Influence on the Jazz Genre 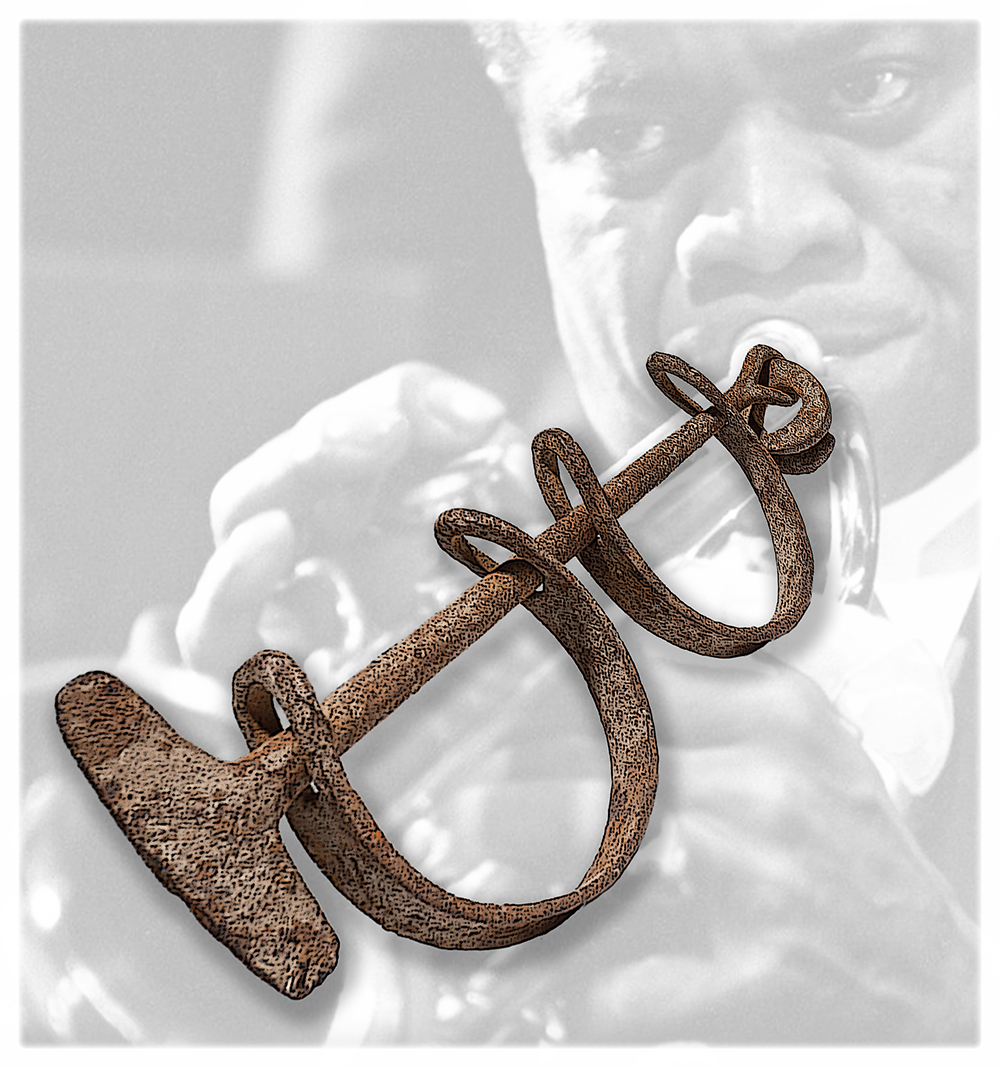 Artist Colin Quashie’s exhibition Linked serves the purpose of making connections between historic and contemporary images. He does so by taking both historical and contemporary images and overlaying them with items referring to the institution of slavery and dating back to the Antebellum period. One piece in particular catches my eye.

Gabriel, one of Quashie’s pieces, is a representation of jazz artist Louis Armstrong. Trumpet in hand, Armstrong appears to be playing his heart out. Quashie has placed an image of dated, rusted shackles over Armstrong’s instrument, and oddly enough, the shackles resemble the shape of a trumpet quite clearly. Here, Quashie makes a visual connection between slavery and the jazz style.

In this particular piece, Quashie implies the that the root of jazz stems from “field hollers and work songs”(Quashie Extended Captions) sung by slaves during the Civil War era. This style, now referred to as ‘the blues,’ is characterized by its “chord progression, the use of flattened or “blue notes” and melancholy lyrics” (McGregor, 2016). These types of spirituals were sung all over the South during the height of slavery, and are still widely recognized today. The songs were a way for enslaved individuals to convey their feelings and emotions in a way that others in the same situation could empathize with. It is these ‘blue’ songs that would ultimately lay the bricks for modern jazz.

This piece, though it uses an image of Louis Armstrong, derives the title Gabriel from the Bible. As many know, Gabriel was the angel that informed Mary that she would give birth to the Son of God. In the Bible, there is a passage which stated, “that Jesus would send forth his angels with a great trumpet, signifying the call to judgement and the end to an enslaved person’s suffering”(Quashie). It was this passage that ultimately named the spiritual “Blow Your Trumpet, Gabriel” (Quashie). Spirituals were sung to get workers through long days of field work and as a way to express their pain and suffering.

Quashie’s Gabriel acts as a direct connection between the past and present as it utilizes imagery from the two different times to establish a historical connection. Quashie concluded that work songs were the foundation for blues music, and in turn, blues was the foundation for modern jazz. “All of the Black musicians who contributed to the early days of jazz, to its formation,” says Quashie, “were the children or grandchildren of enslaved people” (Quashie). By replacing Louis Armstrong’s trumpet with shackles, Quashie shows contemporary viewers how jazz made it to this day.

McGregor, T. (2016, April 21). How Did Jazz Originate? Retrieved from Spinditty: https://spinditty.com/genres/How-did-jazz-begin-Part-one-of-a-history-of-jazz The Influence of the Blues on Jazz. (2019). Retrieved from Jazz in America: http://www.jazzinamerica.org/pdf/1/influence%20of%20jazz%20on%20blues.pdf
Colin included this citation in his extended captions.