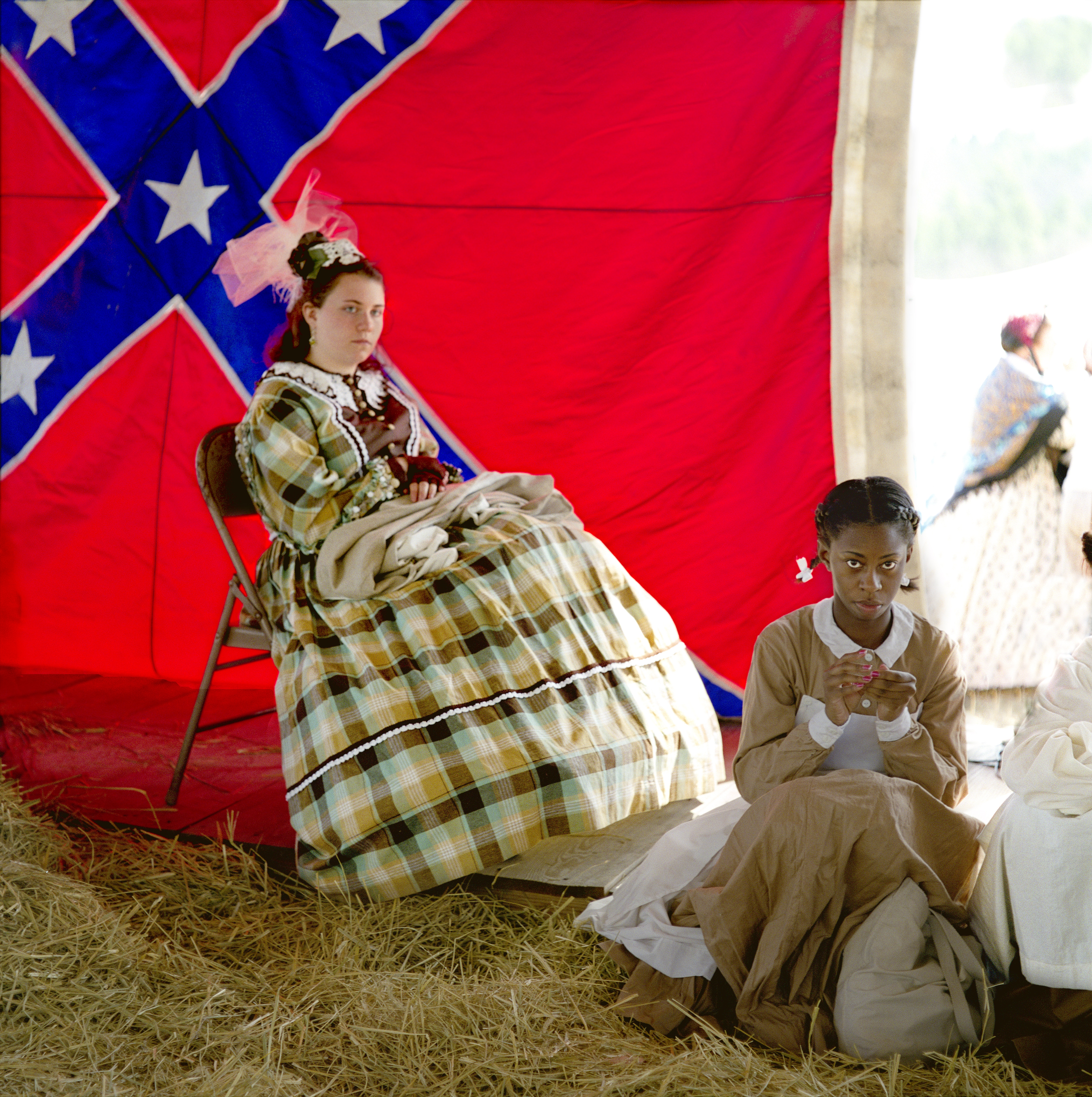 As William Faulkner said, “The past is never dead. It’s not even past.” This sentiment rings especially true in the South. The Southbound project is an interesting one, for it is photography of and about the “New South.” The photos are all taken after the year 2000, but what does the idea of the “New South” really mean?

To me, Southbound moves beyond archetypes of the region, it portrays an honest and expansive view of the south as it is today, moving away from the ugliness of the past and perhaps suggesting that, as the South continues to change, we can be hopeful for a more inclusive and brighter future. Anderson Scott’s 2011 photograph Aiken, South Carolina has a similar sentiment to the Faulkner quote: the past is never dead—and we should never forget that. The photo is from his Confederates series, which explores the culture of Confederate reenactments. It portrays a young, African American woman posing as a seated enslaved girl, next to a white woman who sits higher up, on a chair. The Confederate flag—ever a divisive symbol—dominates the photograph. In alluding to the past, this photograph shows us the racial issues we still deal with in the present. The hotly-debated flag was only taken down from the South Carolina state house in 2015, after activist Bree Newsome climbed the pole and took it down herself. Scott’s image makes me think of that: the fact that the Confederate flag was hanging on our Statehouse grounds in 2015 is both embarrassing and unsurprising. I love that the young African American woman is the subject of the photograph, and her stare into the camera is one of both confrontation and wisdom. 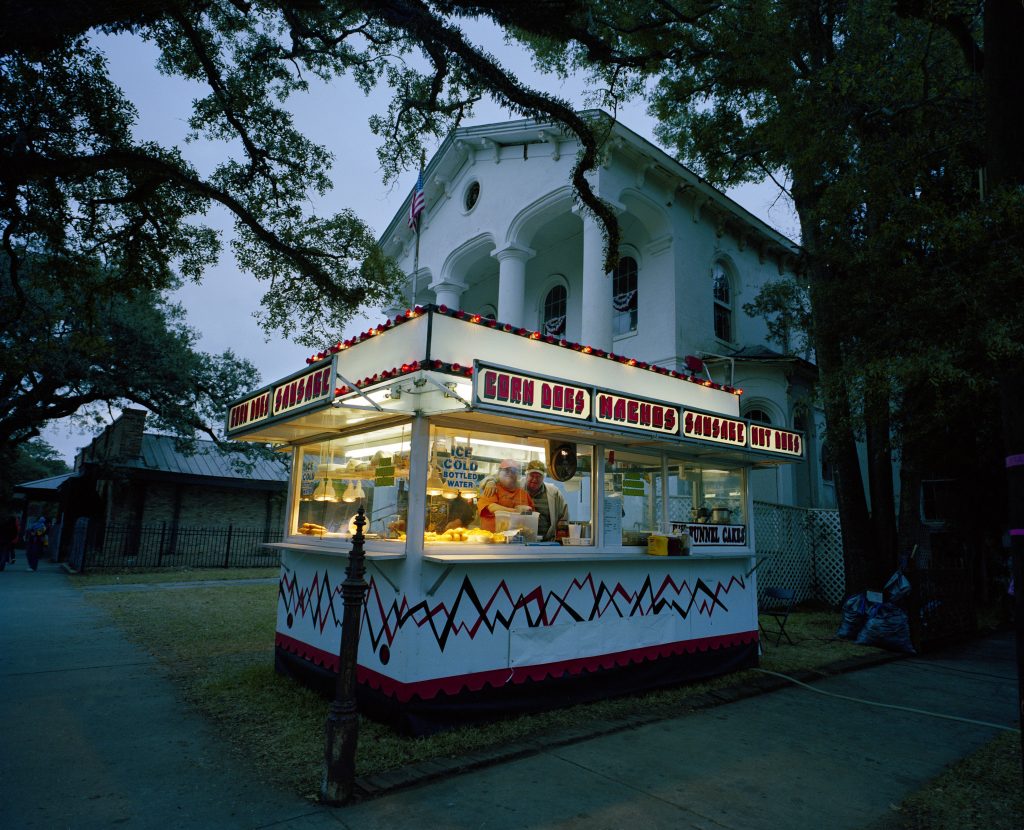 While Scott’s photo reveals division present in the South, Alex Harris’ work presents the cultural mixing of the South in a positive light. Mardi Gras Nacho Stand, American Legion Yard, Government Street (2010) shows two workers in a bright, lit-up, carnivalesque food stand which stands in stark contrast to the dimly light classical-looking building behind it. The food—nachos, funnel cakes and hot dogs—come from all different cultures, showing the shifting nature of Mobile, Alabama in a direction less connected to its deeply Southern roots. In fact, Harris has another photo (Beach Boulevard, Biloxi, Mississippi, 2006, which is included on the project’s website) where a tattered Mississippi state flag—still featuring the Confederate emblem—is very low on its pole, half a year after Hurricane Katrina. Harris’s work, optimistically, feels like the New South is moving away from the past, while Anderson Scott’s work cautions that the Old South is still present. Both of these points of view are absolutely necessary to understanding the South. Both Harris and Scott’s work reminds me that, in learning how to move forward, we cannot ignore our past. 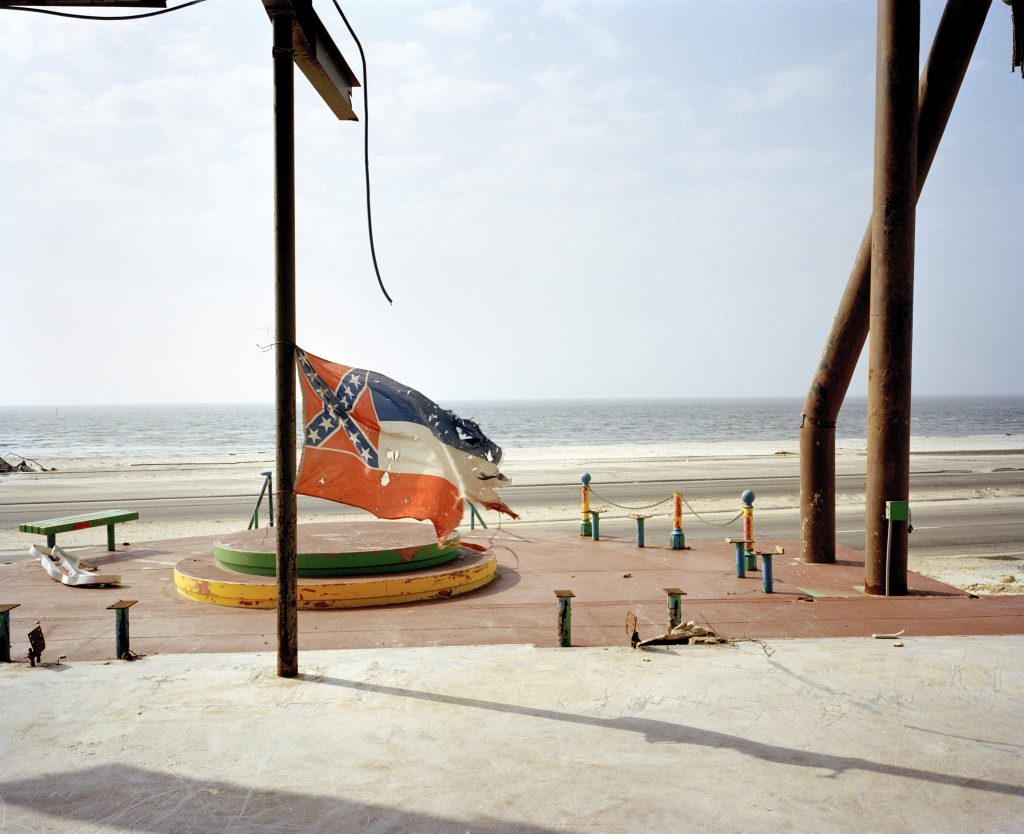