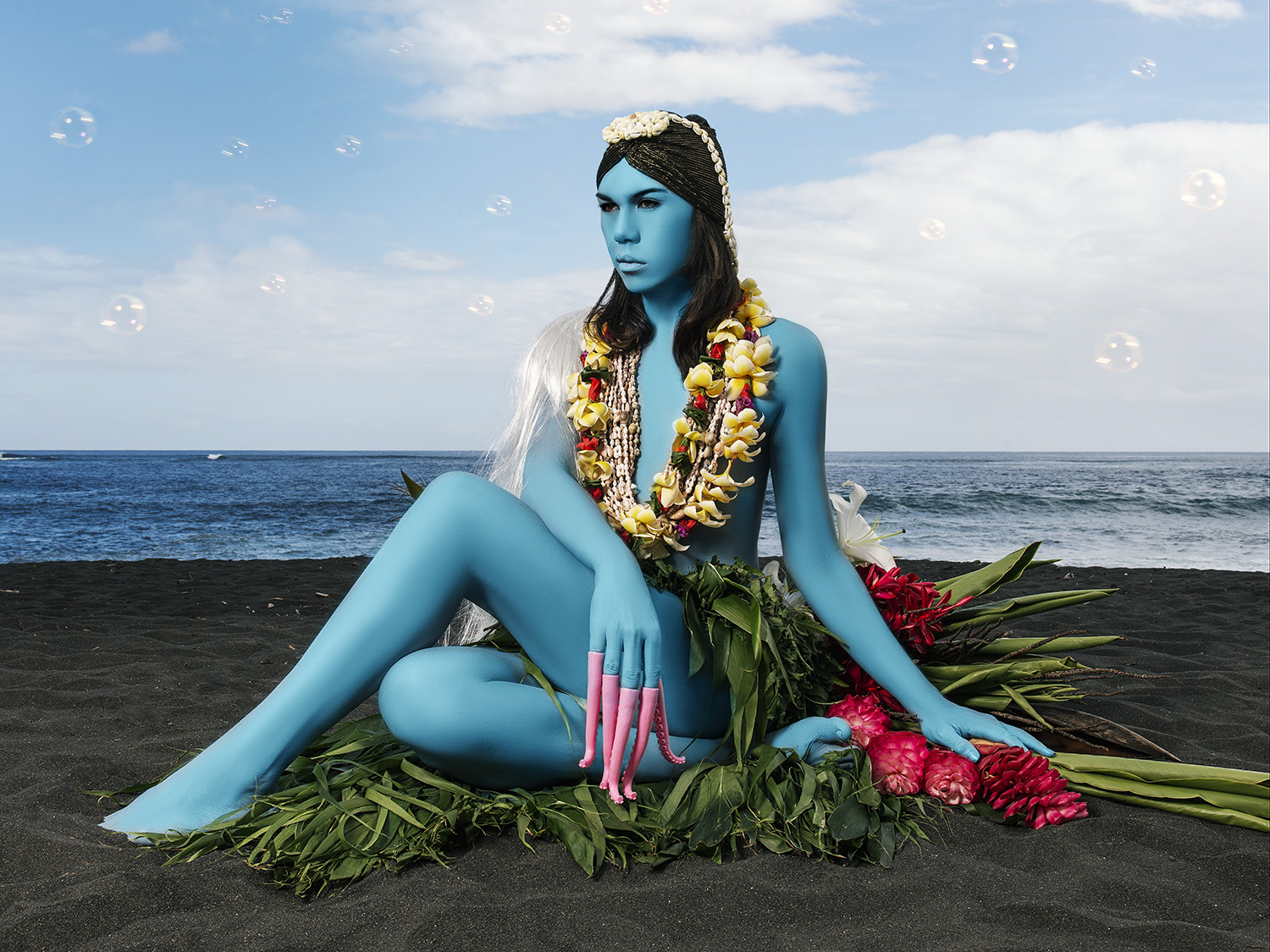 Illusions is Namsa Leuba’s newest series made during her two-year stay in Tahiti, photographing her relationships with community members. The series, included in Crossed Looks, explores the fetishization of the Other in Western society, particularly within art and media.

In tandem with Leuba’s other work, Illusions explores the Western tendency to see other cultures as the Other. Gauguin’s paintings of Tahiti depicted images of indigenous women naked or ‘exotic’ for Western viewers, further othering the Tahitian people. Many times, Western viewers do not see the cultural history present that is recognizable iconography to many African people in Leuba’s work, sometimes mistaking it as simply fashion editorials.

Janice Gassam Asare explains what fetishization is in her article What is Fetishization And How Does It Contribute To Racism as “Fetishization can be thought of as the act of making someone an object of sexual desire based on some aspect of their identity.”[1]

Illusions directly challenges the themes of 19th century artist Paul Gauguin’s art of Tahiti and stereotypical ‘tropical’ images in modern art and media, both of which fetishized the indigenous women of Tahiti. Gauguin was a member of the Impressionist movement and imposed a self-banishment on Tahiti in the 1880s to create ‘pure’ or ‘primitive’ art.[2]

Many “Primitivist” and stereotypical images of ‘tropical’ cultures come from the Western tendency to blend these distinct, unique cultures into one without regard for the history and cultural differences between them. Leuba challenges this preconceived notion by reframing these images to give the subjects personhood instead of objecthood.

Leuba directly confronts Gauguin’s misrepresentation and stereotypes of Polynesian cultures with Illusions. Gauguin’s artwork of Tahiti that made him famous though it fetishized the indigenous women of Tahiti, portrayed Tahiti as a strange, exotic destination for Western viewers. Throughout Western art, indigenous women have been fetishized and portrayed as something exotic.

Leuba evaluates the gaze of both past and contemporary artwork, saying “I am interested in the politics of the gaze – who is looking, who is being looked at and the medium of which this looking occurs.”[3] Illusions allows the photos’ subjects to use photography to reclaim their identity instead of it being a way to objectify them.

Collaboration is a prominent feature of Leuba’s photography and it is no different with Illusions. Much of Leuba’s work explores the idea of collaboration with those being viewed in the artwork, using the image as a way for the subject to be shown as a person instead of being portrayed and shown in an objectifying light. Allowing the viewer to see them as people, not just ‘exotic’ people from a faraway exotic land. Illusions continue Leuba’s history of using photography and subject collaboration to make portraits less about being objectified and more about how artwork can be a medium for subjecthood and identity.

Spirit’s Turf
The Next Generation (of) Lagos: Representation in the work of Namsa Leuba