Hitnes and Audubon: The Wild Turkey 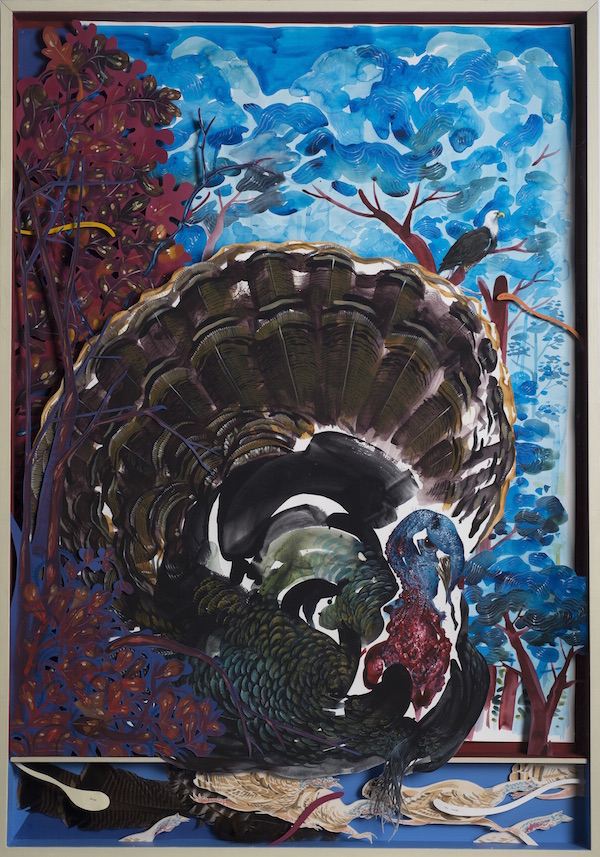 The Image Hunter: On the Trail of John James Audubon is currently being exhibited at the Halsey Institute. This striking exhibition features the work by the Italian artist Hitnes, who retraced Audubon’s travels in the United States, while sketching and painting what he saw along the way. John James Audubon was an American ornithologist, naturalist, and painter. He was notable for his extensive studies documenting all types of American birds and for his detailed illustrations that depicted the birds in their natural habitats during the early nineteenth century. Almost two-hundred years later, Hitnes commenced a three-month road-trip, retracing twenty of the same cities Audubon had traveled through, including Charleston, SC! Along his route Hitnes created an updated visual documentation of the many birds Audubon had originally painted.

The piece that I am most drawn to in Hitnes’s collection is Wild Turkey (Game), 2017. This image is done primarily with watercolors and acrylic paint on paper with found objects in a shadowbox. This medium variation is the most apparent difference between Hitnes and Audubon’s work. The multi-dimensional style of art takes a modern twist on Audubon’s early paintings. In comparison, the color palette used in both images is similar, ranging from deep reds to rich emerald hues. The position of the birds in both images differ–Audubon painted his turkey with its feathers down, whereas, Hitnes painted his turkey with its feathers fanned out. 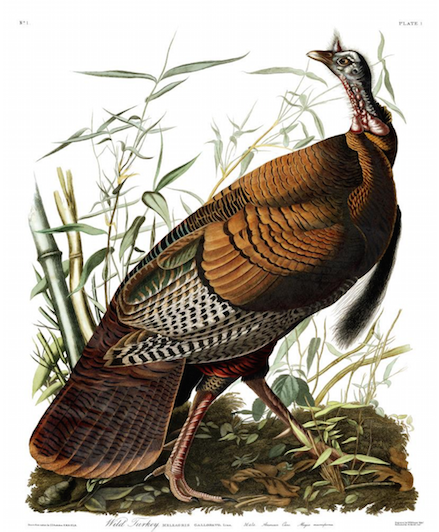 Furthermore, Hitnes and Audubon also took different approaches when it came to creating their pieces–Audubon would actually kill the bird, pin it to a board, and paint his subject in life-size form. He would even proceed to cook and eat the bird once he was done! In contrast, Hitnes observed the birds in their natural habitats and would capture them on a camera. He would often canoe or hike to the bird’s locations and collect found objects along the way. Through this experience, Hitnes attempted to get the same consumption experience as Audubon without actually harming any wildlife in the process.

Overall, both of these artists portray exciting and dynamic images. Although they are similar in subject matter, they vastly differ in medium, style, and approach. These artists come from two completely different worlds–ranging over two-hundred years apart. Hitnes’s exhibition documents his own personal journey, while imbedding life and personality into each bird he created along the way. The Image Hunter: On the Trail of John James Audubon truly captures what it is that drives a person to dedicate their life to pursuing such a passion, like Hitnes and Audubon both did.