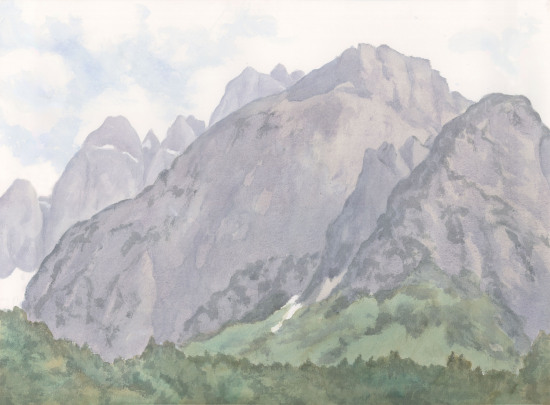 “It is very important to have something that you have a true love for, because you need to be enamored in what you do, and that shows in the work.” – Riccarda de Eccher

Riccarda de Eccher’s career as an artist did not start until later in her life, but her affinity for her subject matter has been lifelong. Born in Bolzano, a small city in a valley of the Italian Alps, Riccarda felt from an early age that the surrounding mountains created a lot of stability and direction in her life. As a teen, her family moved to the much flatter city of Udine, and while living there she felt both lost and uncomfortable. Finding herself missing the mountains, she later took a rock-climbing class on a whim and felt that her life had changed. She found that climbing was important for of her self-esteem, and mountains remained very central in her life. 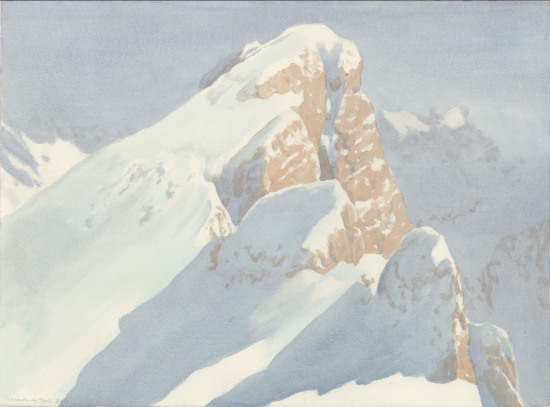 Later in life, while on a hike with her nephew, he asked her the name of a wildflower. Feeling slightly bad about not knowing the name of the plant, since she had been going to the mountains regularly her entire life, she bought a book of plants and flowers hoping to learn more. However, the photographs were not of the best quality, so she decided to buy watercolors and depict them herself while on her hikes. As she discovered that she loved the process, she began to paint more and more. It was only obvious that mountains would become her subject. 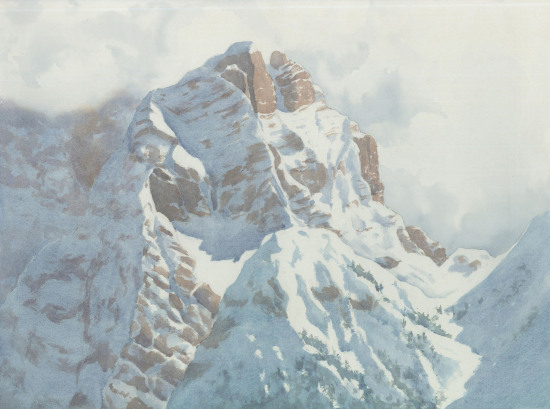 Believing painting to be more about the process than the result, Riccarda de Eccher likes to provide the viewer with the least amount of message as possible while portraying what she wants to. She enjoys painting as large as possible, feeling that a smaller size would diminish the grandiosity of her subject. Watercolor is her paint of choice and is usually seen as a light and airy medium, yet she manages to provide both a serene and majestic feel to her body of work.

During her Dis/placements Conversation, Riccarda de Eccher was interviewed by Halsey Institute curator Bryan Granger, who also wrote her accompanying essay. When talking about her first love of climbing, Riccarda said, “In my next life, climbing will be all that I do. It is something I’m sorry I stopped doing, because it’s an artistic gesture that uses only the body.” Though she does make a point to acknowledge that it is still more difficult to paint than climb them. As she navigates life between Italy and the United States, her two homes, Riccarda has an appreciation of both landscapes and acknowledges the essential feeling of solitude that she gets each time she is surrounded by the natural beauty of both of her homes. “I’m not alone,” she says. “I’m with the mountains.”