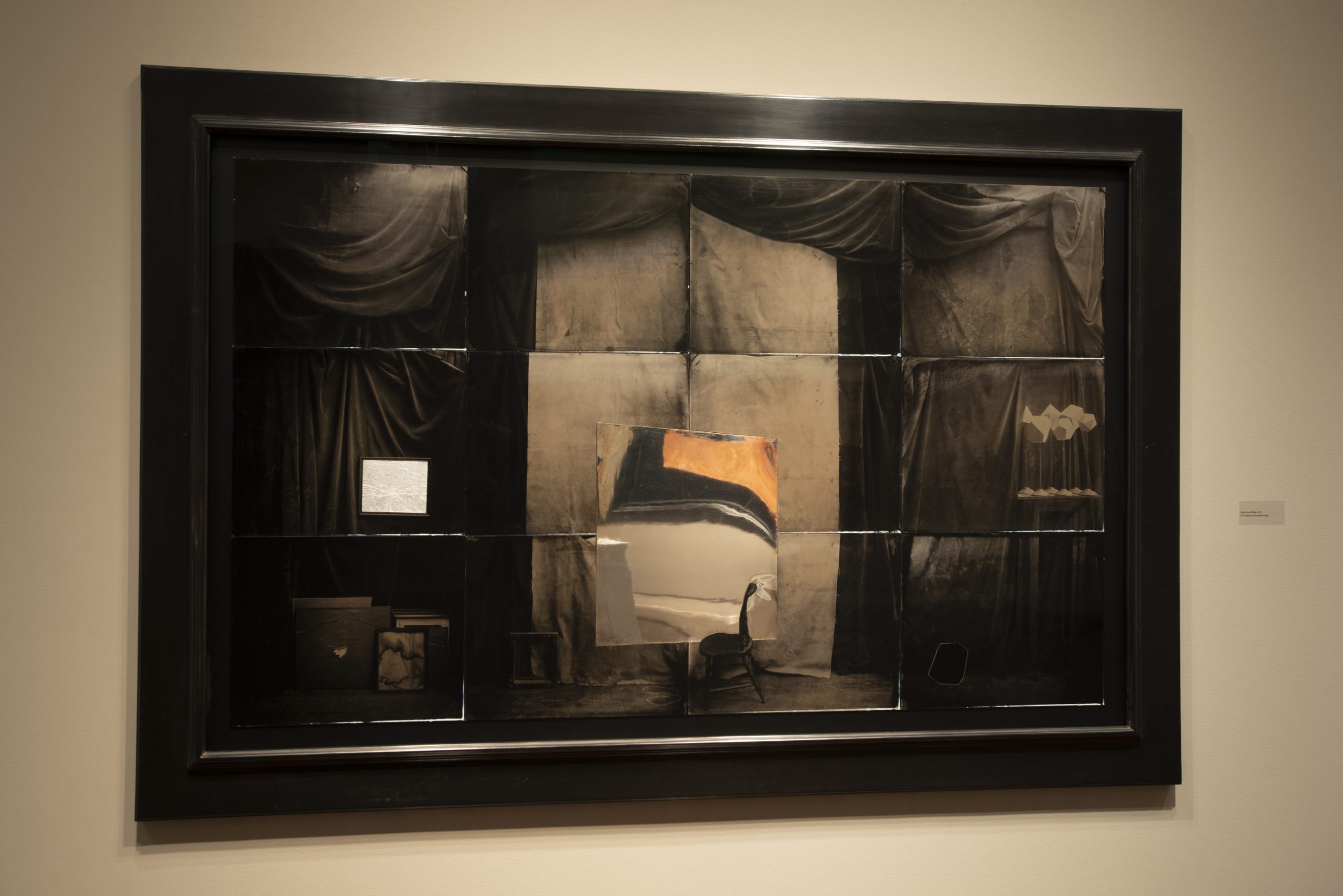 The largest and most enticing work in the Wunderkammer exhibition is Studio of an Old Man by Dan Estabrook. The captivating piece draws the viewer into a mysterious and open studio space. The studio depicted reminisces upon early photography studios – closed off from all light, filled with props and backgrounds, and designed to give you a personalized piece of the most advanced and exciting technology of the time – a daguerreotype portrait. The only thing missing from Estabrook’s studio is a head brace to ensure a high quality portrait by mitigating even the most subtle and unnoticed tremors. Estabrook examines what makes photography art, self reflection, and photography’s history with artifice within Studio of an Old Man.

The work consists of twelve tintypes that create one large photograph. The sheer size of the work and the need to combine smaller photos to create one large one illustrates the scale limits photographers faced in the early days of the medium. Estabrook’s touch can be seen throughout the work and it is made evident through the merged photos. Twelve individual tin types, each from slightly different angles and viewpoints come together to create an imperfect, but whole image of a studio. Estabrook’s work serves as a reminder that photography, while incredibly accurate, is art because of the ability to convey emotions and comment on history. His piece purposefully shows the human touch that was needed to create the work, demonstrating the energy and patience needed to create a tintype. The need to remind the viewer of photography’s ties to the physical world is a constant battle that photographers have faced since the dawn of photography. 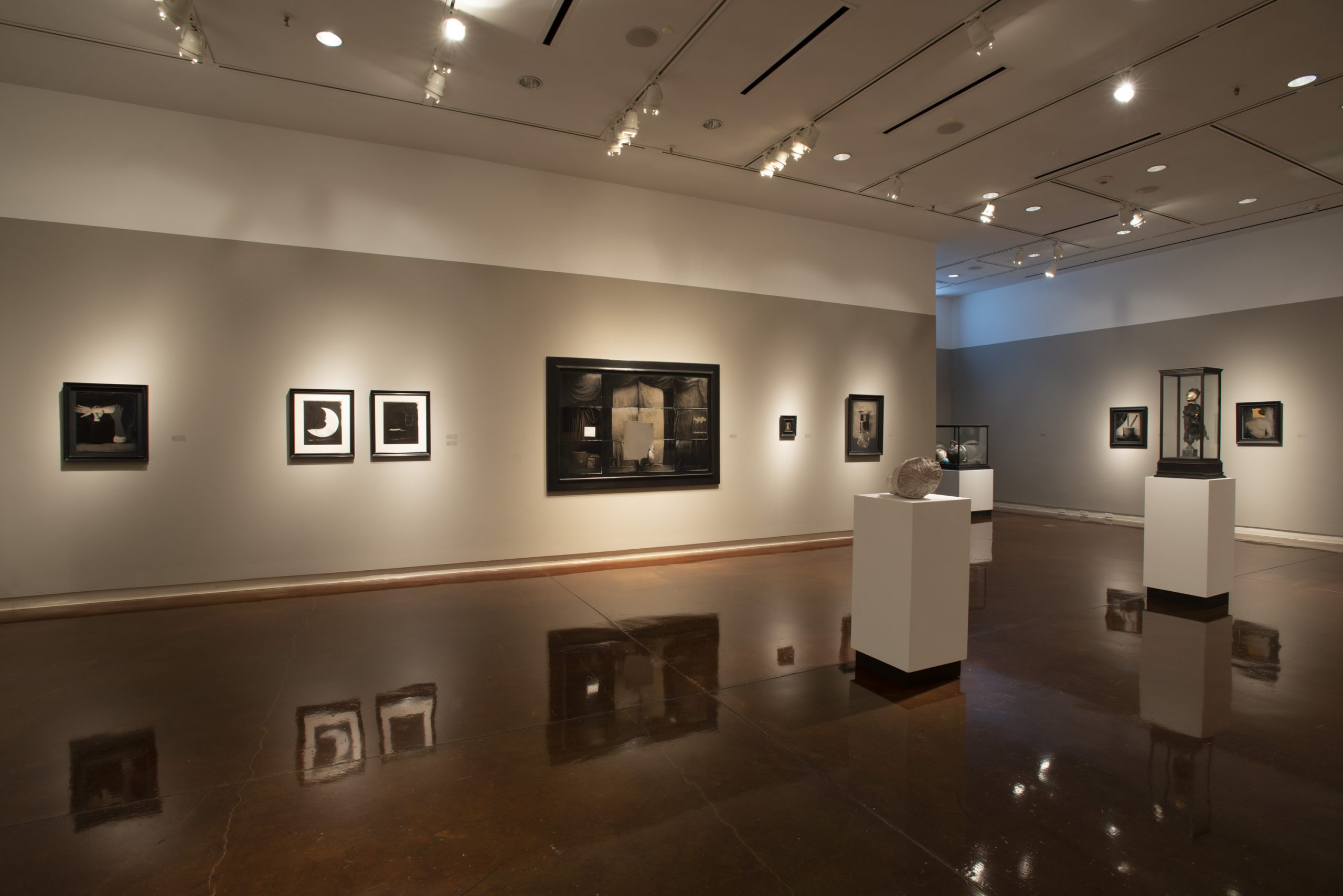 The dwarfed chair, turned frames, and the reflective metal plate work together to give the viewer an uncanny feeling of inclusion and intrusion. The reflective metal placed in the center of the work above the chair asks the viewer to not only see themselves within the work, but as the supposed client, muse, or subject of the unseen artist. Lending to the uncanniness of the work is the fact that the viewer’s reflection while clear is distorted and awkward as a result of the metal and it’s placement. The viewer must backpedal away from the work, dodge the head of The Old King, and most likely squat down a little to get a glimpse of themselves as the subject “sitting” in the chair. Estabrook’s work asks the viewer to reflect upon their own image and how they exist in the world.

The distortion of the viewer’s reflection is interesting because it gives the viewer an inaccurate depiction of themselves. Early studio portraits often involved a lot of artifice. The studio was filled with props of all kinds and elaborate backgrounds. One could step into the studio in tattered clothes and step out with a portrait that showed they were a successful businessman. Typically, the more props and artifice the more the viewer was trying to conceal and morph their identity. The distorted reflection shows the viewer that they may morph and change once in the studio. They can take control over how they are perceived by the world. The question becomes whether they will use artifice to shape their identity or not. If they do choose to employ artifice will they allow others to glimpse at their real self just as Estabrook allows the viewer to see that the giant image is indeed created by twelve individual and imperfect photos?