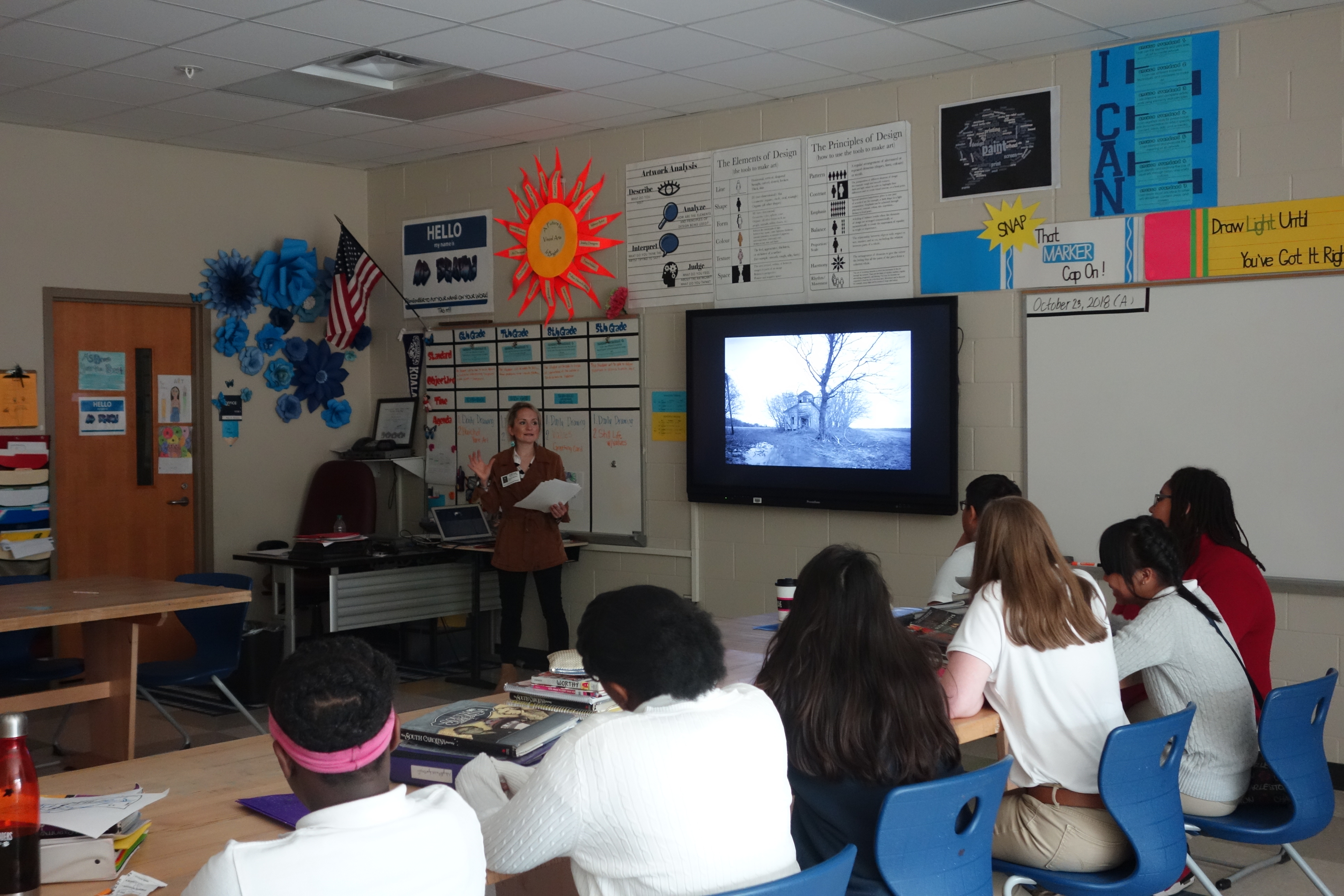 This post is the third in a five-part series by Dr. Mary Trent, College of Charleston instructor in Art and Architectural History and Southbound project contributor, that highlights the extensive K-12 outreach program correlating to the Southbound project, Capturing #MySouth.

Rachel Boillot was a high school student when a class visitor changed her life. An alumni who worked as professional art photographer visited her art class. Not knowing that creative photography was something one could do for a career, Boillot fell in love with photography and, as she says, “photography defined my life ever since.”

Boillot has now had the chance to pay it forward by visiting two local schools: Haut Gap Middle School and St. John’s High School. She is participating in the Halsey Institute of Contemporary Art’s Capturing #MySouth program, which is generously funded by an Arts, etc. grant. A professor of fine art at Belmont University and photographer in the Halsey’s current exhibition Southbound: Photographs of and about the New South, Boillot believes it is vitally important to introduce the camera in the formative middle and high school years when students are actively working to define themselves. And, she found that the students she visited with were really eager for the opportunity to learn some basic instruction for how to use photography as a creative language and fine art form, as opposed to just using their smartphone to make a family portrait or snapshot. 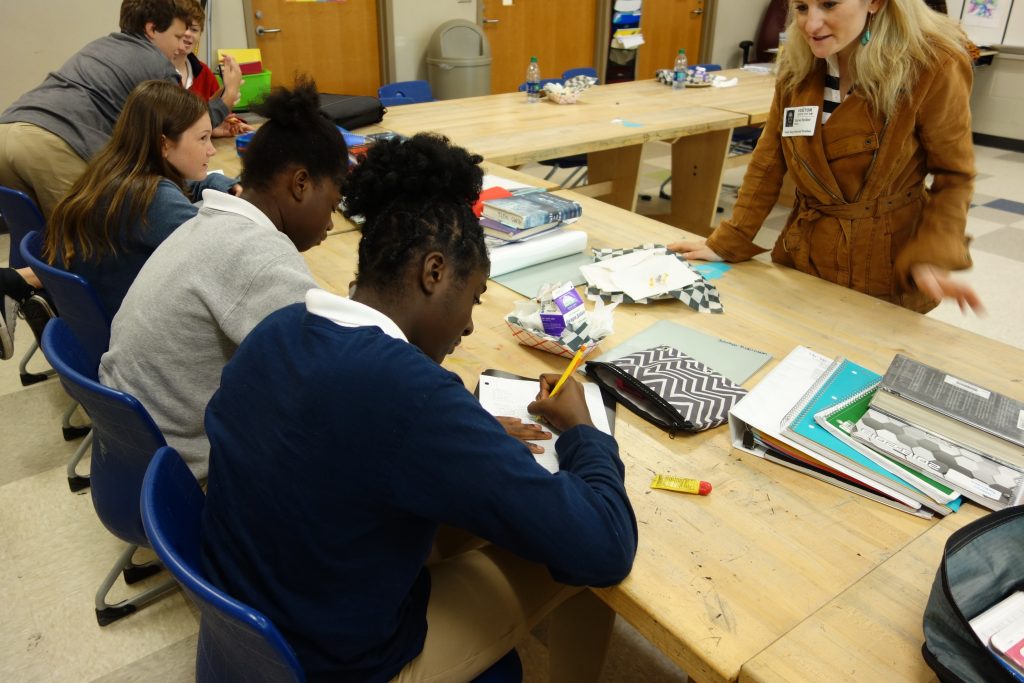 During her workshops, Boillot praised her mentors along her artistic journey as a photographer. She talked about her time spent with fellow Southbound artists and mentors Tom Rankin and Alex Harris, both of whom work at the Center for Documentary Studies at Duke University, where she studied. Going through slides of their photography, she discussed individual characteristics of their work that informed her work over the years. Boillot engaged each student with different ways of seeing and talked about logistical things, such as how to capture movement, and using and manipulating natural light and shadows. Discussing work from her Post Script series, she surprised students with her findings of rural post offices scattered throughout the South. The unconventional post offices she photographed ranged from being housed in trailers to being built up on stilts in flood-prone areas in the South.

Boillot sparked insightful conversations amongst the students when starting to generate ideas of how to photograph their “South”. One student recalled a fantastic pink room in her grandmother’s house that housed knick knacks, trinkets and other exciting things that she could not wait to photograph. Another student talked about how important southern food culture is in her large family and promised she would take photos at their next gathering. What the students took from Boillot’s workshops is that the idea of home here in the South means something different to us all, and what may seem ordinary to you could be captivating for someone else. 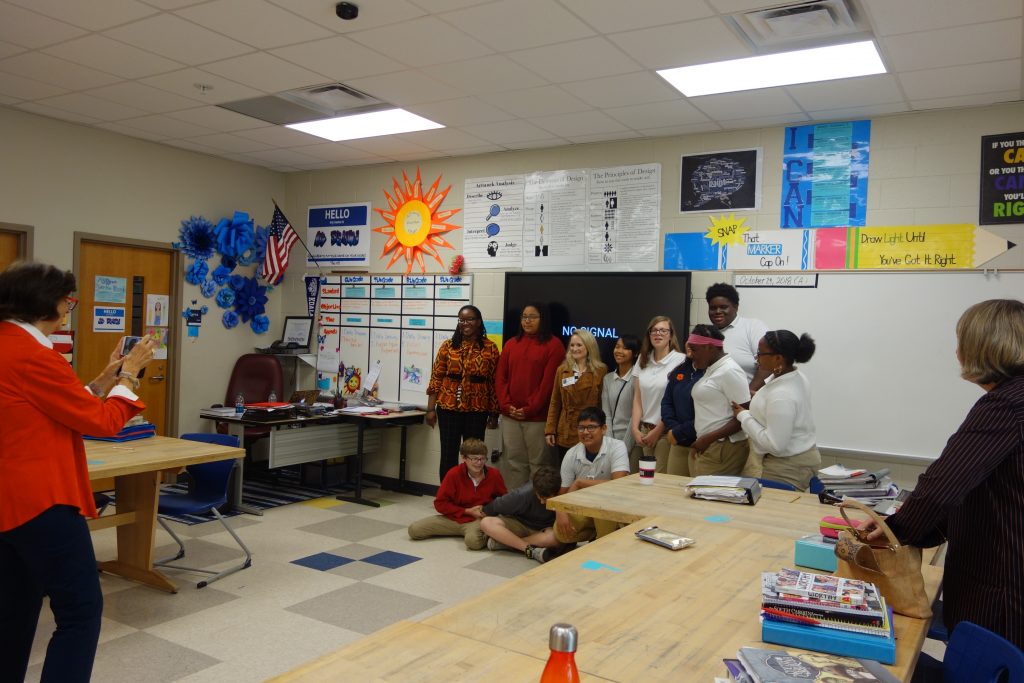 After her visit, the students put Boillot’s principles to use in taking their own photographs, which Boillot then discussed with them in individual critiques over Skype during their class time. Most of the students seemed a little bashful during the critiques, but also quite proud of their work. Many of them described how they might have previously taken their shots in a more conventional way, but after hearing her speak they experimented with something different. They were invested in the project and actively tried to move beyond the ordinary by trying different compositions, lighting, etc. As Boillot herself had learned to do when a photographer visited her high school class so many years ago, the students had started to think more critically about how to make photographs that represented the way they wanted to represent the world, rather than just have the world presented to them through someone else’s conventions.