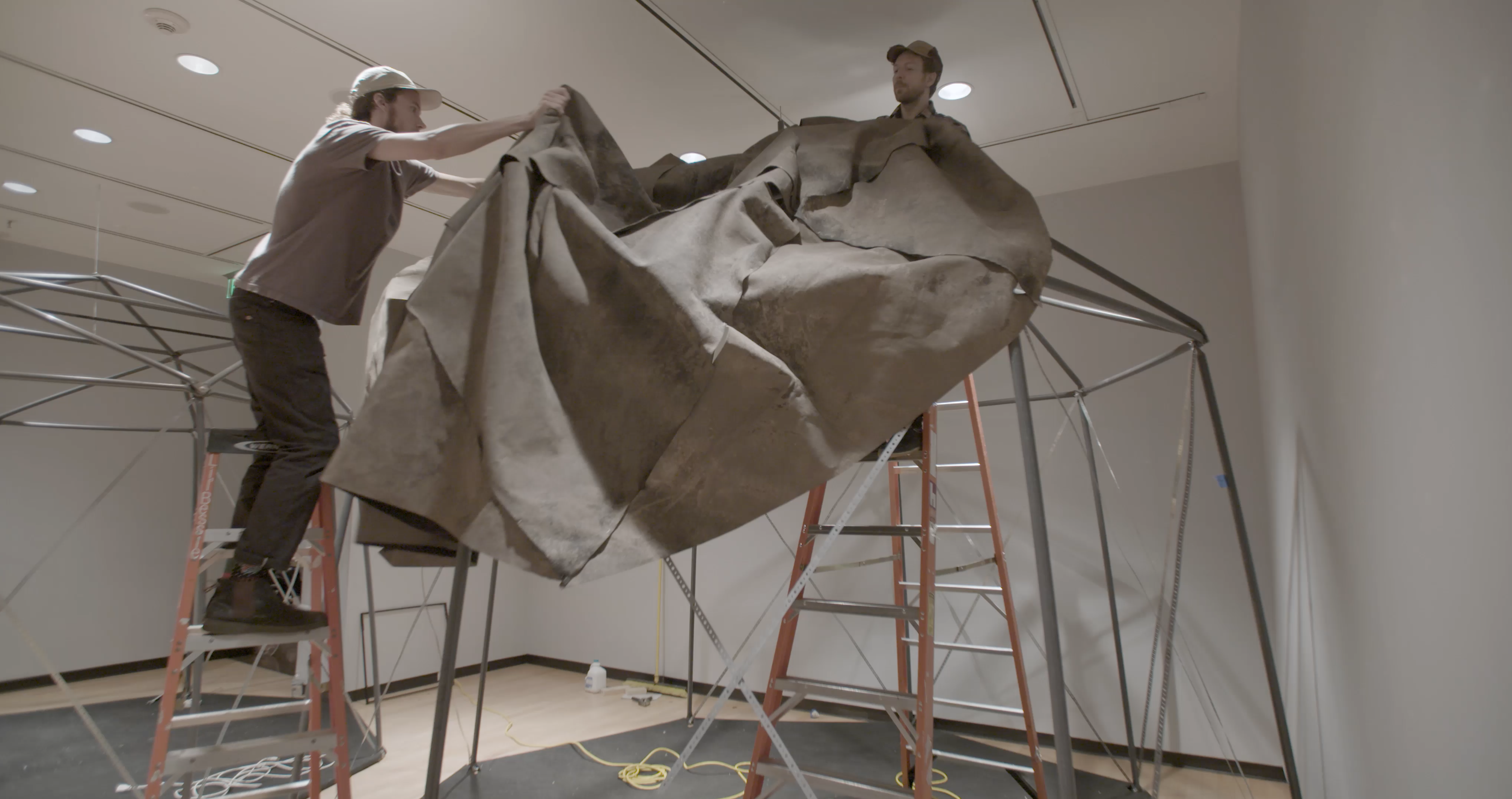 The Halsey Institute for Contemporary Art is a home to a diverse group of staff members who work hard behind-the-scenes to ensure that visitors have a memorable cultural experience.

The job of a preparator, or art handler, is primarily taking care of installation and deinstallation of artwork on display in the gallery. At the Halsey Institute, this role is taken up by Andrew King. King’s job at the Halsey Institute is very important, especially for exhibitions like the one up now, The Carrion Cheer, A Faunistic Tragedy by German artist duo Matthias Böhler & Christian Orendt. Interested in all the work that went into this captivating installation, I was able to interview Andrew and learn a little bit more about exactly what he does.

Andrew King: I graduated from the College in 2015 with a Studio Art degree. For my degree I was almost exclusively studying photography, with, later on, a focus primarily on the influence of Surrealism in photography. I took a few painting classes but was almost solely focused on the photographic medium. I was away from the College for a few years after graduating but came back to the campus when I was hired by the Halsey in 2017. Returning to campus was kind of strange for me at first being in a new role in a familiar place, but as I have come to work at the Halsey for longer, I really like how my relationships with a number of my former professors have changed into more of a friendship-relationship. It has been really nice to reconnect with my mentors from college, and I feel that my education from them has continued because of my interactions with them as an employee myself.

KE: Are skills in art and design important to performing the role as preparator well?

AK: Yes, 100%. I think everyone who wants to be an artist should hang other people’s artwork. You learn so much and really develop your own skills.

KE: What is typically a day of work like for you? How did this exhibition differ?

AK: Every installation is unique. Each one has its own working method and challenges, which is one of my favorite aspects of my job. I never fully know what I am getting into when I come into work. That is not to say that I do not prepare and pre-plan for what each day holds, but, rather, I find the best working method is to respond in the moment to what needs to get done and be adaptable to changes. My work on The Carrion Cheer was by far the most intensive installation I have assisted on. With this installation, similar to the SEA CHANGE installation with Aurora Robson, I knew to take the role of the artist’s assistant. My job was to be a “yes man.” I was there to be available for the artists and to do whatever was necessary for them to fulfill their vision. I love working this way because I feel I learn so much from the artists by working so closely with them.

KE: Your primary job is to transform a space, in this case from an empty gallery to “a trans-dimensional stop-over camp.” If you could elaborate a little more on the installation of The Carrion Cheer, what was the first obstacle you had to face? Did you first sit down with the artist and make a game plan for how the installation would go?

AK: With this installation, I had some idea of how things were going to proceed because of the work Bryan [Granger, Director of Exhibitions and Public Programs] was doing with the artists beforehand in understanding their process in making the prototype tent, but really I did not know what we were getting into. The first work on this install really began midway through the Young Contemporaries 2018 exhibition when we received the PVC pipe in 20ft poles and cut them down to the sizes the artists had preplanned. The nice thing about this install was that Christian and Matthias were extremely organized and formulaic. They identified what the steps were to get to the end goal of a completed tent and found the most efficient way possible to get to that goal. When working with creating nine tents it was extremely helpful to have their guidance in deciding how actions were going to be taken, and then it was mostly my duty to repeat that action eight more times.

KE: How do you think the approach in installing a show that is fully immersive, like The Carrion Cheer, A Faunistic Tragedy, changes the way it is perceived by an audience? (For example, would it have the same effect if it were 2-D pieces of work hanging on a wall?)

KE: What is the best part of the position as preparator? What’s the worst? What excites you most about this position?

AK: My favorite part of being the preparator at the Halsey is the direct and intimate interactions I have with the artwork and/or the artists. I am a voracious learner, and I love pulling techniques I find from artwork at the Halsey and integrating them into my own creative process. I am extremely lucky because the Halsey has provided me an opportunity to continue my education as an artist while also giving me some financial stability. Working on Halsey installations provides so much inspiration for me and has been a major driving force on my current studio practice. The job is certainly not easy though. It is very physically taxing. I have learned the importance of stretching and good shoes in order to save your body. This was particularly true for The Carrion Cheer installation. That project was somewhere around a month of 8-10 hour days, 7 days a week. I love the hard work and long hours though. I am a big believer in the idea that if something is to be “good” then it should take quite a bit of time and be a challenge. I am very excited about the upcoming Halsey exhibitions.

It’s easy to see that without King’s hard work and ability to transform a space, the Halsey wouldn’t be the same. Thank you, Andrew, for answering my questions! Be sure to visit the Halsey and see The Carrion Cheer, A Faunistic Tragedy before it’s close on July 7th.

Our Moral Responsibility for Conservation
Hitnes and Audubon: The Wild Turkey