An entirely virtual exhibition, 10/10–Reflections on a Decade of Exhibitions celebrates ten years of exhibitions, partnerships, and programs produced in the Halsey Institute of Contemporary Art’s current gallery space inside the Marion and Wayland H. Cato Jr. Center for the Arts at the College of Charleston. We are spending summer 2020 taking a look back on the adventurous artists we’ve hosted and projects we’ve produced in that time. Over ten weeks, we will be taking a deep dive into each year, featuring blog posts on exhibitions, interviews with artists, and other explorations into the Halsey Institute’s past. This week we are profiling our exhibitions from the year 2016. 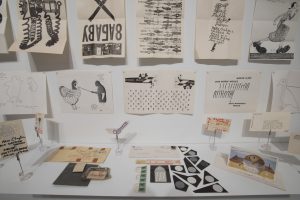 In 2016, the Halsey Institute started with Correspondence Art: Words, Objects, and Images. This show, which featured works by artists Ray Johnson, Richard C. and Bob Ray, consisted of hundreds of letters, postcards, drawings, and a variety of other objects sent via mail. The exhibition highlights the collaborative and improvisational nature of correspondence art. 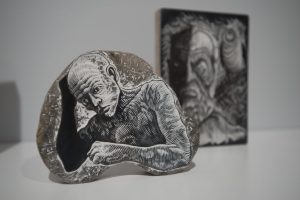 On view at the same time was John McWilliams: Prophecies, a series of woodcuts inspired by life in the Lowcountry. With these elaborate and meticulous woodcuts, the artist explores organic shifts in both natural and imagined worlds. 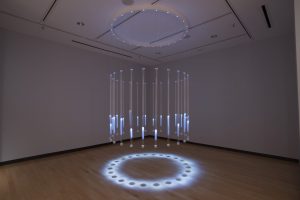 That spring, the Halsey Institute featured Erwin Redl: Rational Exuberance. In this show, Redl presented two installations in his typical style. Using systems of logic, these installations lit up and moved in predetermined patterns. In this show, he illustrated how he pushes minimalist tropes to exuberant extremes. 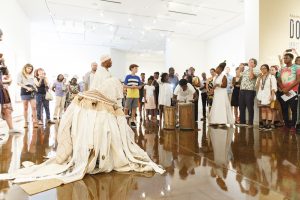 In August, the Halsey Institute presented Fahamu Pecou’s DO or DIE: Affect, Ritual, Resistance. In this show, the artist defined strategies for reframing images of Black masculinity, borrowing from West African tradition, such as the Egungun masquerade. The exhibition opened with a procession starting at Gadsden’s Wharf and ending at the Halsey. 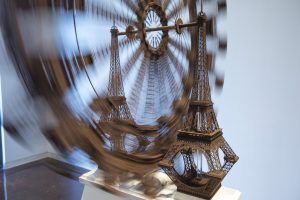 Peter Eudenbach: This is Not an Object, installation view, 2016. Courtesy the artist. Photo: Rick Rhodes.

Later, the work of Peter Eudenbach was featured in the exhibition This is Not an Object. In it, the artist examined how objects function in the traditional sense—and how we understand them. From creating a Ferris Wheel out of Eiffel tower models to warping a shipping container into the form of a nautilus, Eudenbach’s wry wit helped viewers question how they perceive the world. 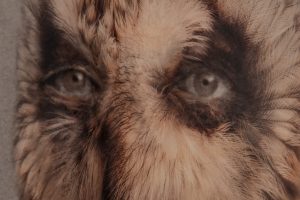 With Eudenbach’s show, the Halsey presented Sara Angelucci: Aviary. In it, the artist delicately merged portraits from 19th century cartes de visite with high-tech 3d scans of extinct bird specimens. With it, Angelucci draws on the history of photography to explore memory, loss, and the natural world. By fusing forgotten portraits with extinct species, the artist evokes empathy rather than separation.