An entirely virtual exhibition, 10/10: Reflections on a Decade of Exhibitions celebrates ten years of exhibitions, partnerships, and programs produced in the Halsey Institute of Contemporary Art’s current gallery space inside the Marion and Wayland H. Cato Jr. Center for the Arts at the College of Charleston. We are spending summer 2020 taking a look back on the adventurous artists we’ve hosted and projects we’ve produced in that time. Over ten weeks, we will be taking a deep dive into each year, featuring blog posts on exhibitions, interviews with artists, and other explorations into the Halsey Institute’s past. This week we are profiling our exhibitions from the year 2014. 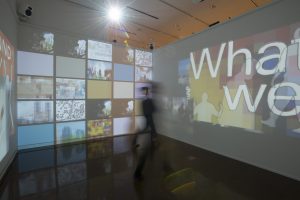 The first exhibition of the year featured Jody Zellen’s Above the Fold. This show explored our interaction with digital media by appropriating images and headlines from one full year of the New York Times’ “World News” website. 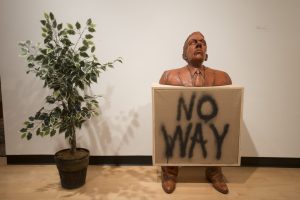 On view at the same time, Bob Trotman’s exhibition, Business as Usual, presented the artist’s signature sculptures of larger-than-life businessmen. With these, the artist probed how greed and power have detrimental effects on society. 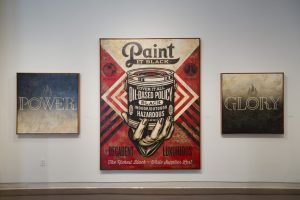 In May, Charleston’s very own Shepard Fairey returned with an exhibition of his new work, alongside prints by Jasper Johns, called The Insistent Image: Recurrent Motifs in the Art of Shepard Fairey and Jasper Johns. This exhibition showed how both artists reuse similar elements in throughout their work and give new meaning to everyday symbols. Along with the show, Fairey also created a number of large-scale public murals around the city. 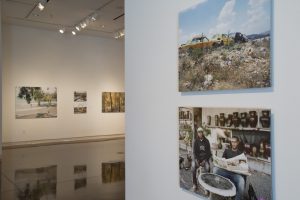 Yaakov Israel, The Quest for the Man on the White Donkey, installation view, 2014. Courtesy the artist. Photo: Rick Rhodes.

That fall, the Halsey Institute featured Yaakov Israel, The Quest for the Man on the White Donkey. In this show, the artist explored his own homeland Israel, his personal connections to that country, and his place in a broader global community. 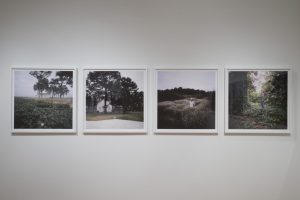 Along with Israel’s show, the Halsey Institute presented Kathleen Robbins: Into the Flatland, a series of documentary photographs, investigating the people, landscape, and culture of the Mississippi Delta. 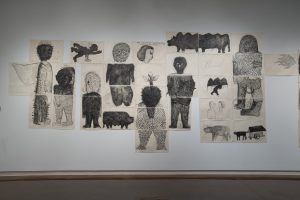 Jumaadi, Forgive Me Not to Miss You Not, installation view, 2014. Courtesy of the artist. Photo: Rick Rhodes.

In October, the Halsey Institute featured work by Jumaadi, an Indonesian artist who works with multiple media including painting, drawing, sculpture, and shadow puppets. He was the fall 2014 International Artist-in-Residence and created a new body of work for his show. Forgive Me Not to Miss You Not was the artist’s first exhibit in the United States. 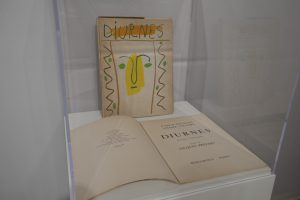 Concurrently, the Halsey Institute presented Unknown Picassos: Diurnes. The project consisted of 30 original photograms made by a photographer, André Villers, using, at Picasso’s direction, paper cutouts that the artist had made for his grandchildren in the early 1960s. This exhibition of the famed artist’s little-known work was guest-curated by Dr. Diane Chalmers Johnson, Professor of Modern Art History at the College of Charleston at the time.